Ever since his arrival in the desert, Arizona left-hander Robbie Ray has morphed into a flamethrower, with a propensity to pepper the outer edges of the strike zone, virtually overnight. It may have something to do with his Grizzly Adams-style beard, but it has a lot more to do with a staggering increase in fastball velocity, which has propelled him from a fringe fantasy prospect into one of the more intriguing young southpaws in the game today.

Through four starts as a member of the Diamondbacks rotation, Ray owns a stellar 1.09 ERA and 0.97 WHIP to go along with 16 strikeouts and just seven walks over 24 2/3 innings of work. According to Baseball Prospectus’ revolutionary new metric for evaluating past pitcher performance, Deserved Run Average (DRA), the only starting pitchers who have posted a lower DRA than Ray (1.82 DRA) this season are Eduardo Rodriguez, Chi Chi Gonzalez, Chris Young (who I wrote about a few weeks ago), Sonny Gray, and Dallas Keuchel. While we may be dealing with too small of a sample size to draw any significant conclusions from just yet, the results we have seen so far aren’t insignificant, and they speak to just how well he has pitched since arriving in Arizona.

In his last outing on Monday night, Ray dominated the Los Angeles Angels, holding them to just a pair of hits over seven scoreless innings, while racking up three strikeouts and inducing a pair of ground-ball double plays. He didn’t allow a base runner until a two-out walk in the fourth inning, and he carried a no-hitter into the sixth inning before surrendering a two-out single. It would be relatively easy to write off his recent run of success as a byproduct of several tasty matchups against lineups (Angels, Dodgers, Mets and Rockies) that have struggled to hit left-handed pitching all season long, but Ray is clearly not the same pitcher he was around this time last year, when he was getting shelled in the Motor City.

Entering the 2015 campaign, Ray was an afterthought to most fantasy owners, even in the deepest of dynasty leagues. He was known mainly for his role as the centerpiece of Dave Dombrowski’s riskiest deal in recent memory, which shipped rotation anchor Doug Fister to the Nationals in 2013. The trade looked even worse for the Tigers after Ray was subsequently rocked in his brief Detroit debut (8.16 ERA in 28.2 innings) last season.

Given a new lease on life in Arizona, who acquired him in the Didi Gregorius deal in the offseason, the transformation for Ray began at Triple-A Reno this spring, where he posted eye-popping strikeout (12.31 K/9) and walk rates (5.83 BB/9) over nine starts. While those gaudy strikeout numbers haven’t carried over into the majors (5.84 K/9) he is finally looking like he belongs in a big-league rotation.

What immediately stands out, as a catalyst in Ray’s metamorphosis, is a significant increase in his average fastball velocity. He’s averaged over 94 mph on his heater in his four starts this season and has been clocked as high as 97 mph at times. He also hasn’t had any trouble maintaining his increased velocity the deeper he’s gone into his starts, which suggests that there is nothing inherently fluky about his cranked-up heater. 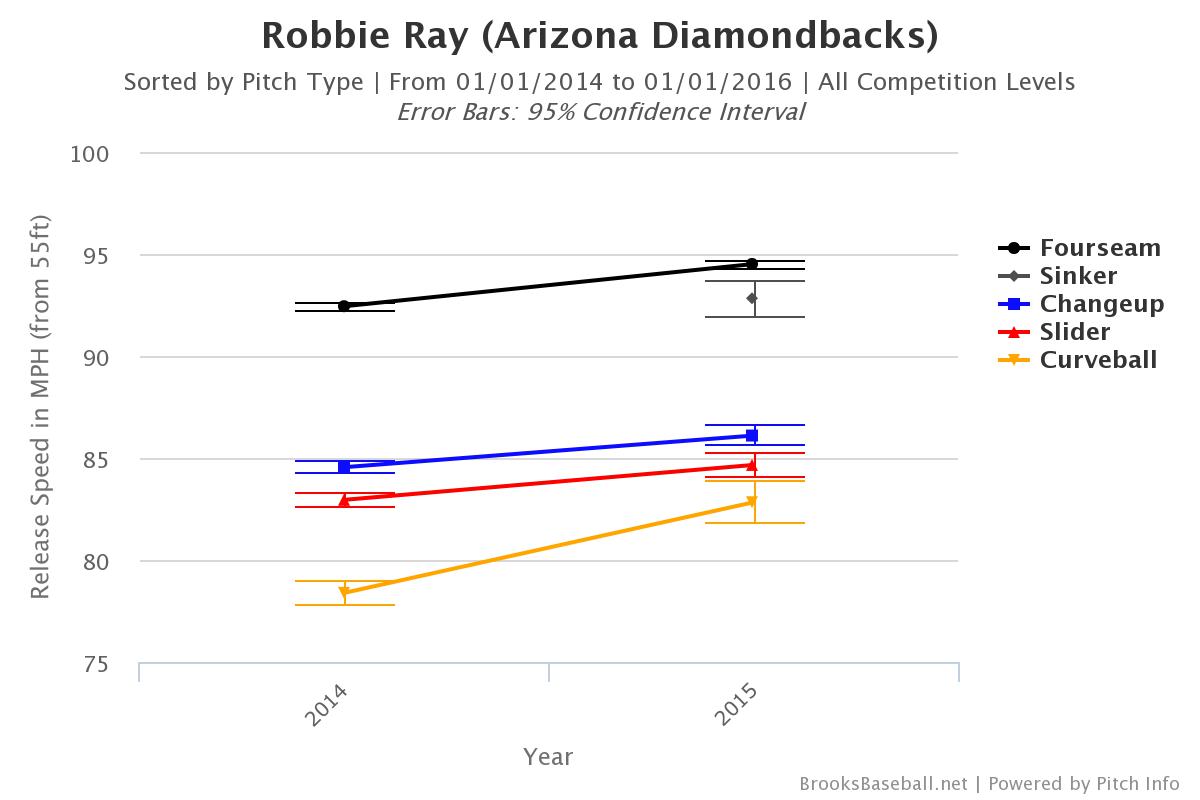 By gaining over two miles per hour in average velocity from a year ago, he’s gone from a fringe major league arm, to one of the hardest-throwing left-handed starters in the game, right up there with stalwarts like David Price, Clayton Kershaw, and Chris Sale in terms of pure heat. The major difference between that trio and every other southpaw in baseball that throws hard can be found in the whiffs-per-swing department.

Not only is Ray throwing his four-seam fastball with greater velocity, but he’s also relying on it more than ever. Zach Buchanan of the Arizona Republic noted in his last start that, “of his 100 pitches, 86 were four-seamers, the highest ratio of any of Ray's big league appearances.“ He's relied on his fastball 69 percent of the time, while barely utilizing his changeup (14%) and slider (10%) this season.

If he’s experiencing these types of statistical results without being forced to ever turn to his secondary offerings, it’s hard to imagine what his ceiling could potentially be if he can develop even an average breaking ball at this point. The reason he isn’t getting burned despite firing so many fastballs is because he’s done a tremendous job mixing up his locations. Whether it’s by design or by accident Ray is getting opposing hitters to chase the cheese.

Perhaps the most staggering statistic Ray has compiled through four starts is his absurdly low walk rate (2.55 BB/9), especially given his struggles with control even in Triple-A this spring. His paramount challenge going forward is going to be ensuring that he can keep the walks to a respectable rate; otherwise he’s going to get into trouble, especially if he continues to rely almost exclusively on his fastball.

According to the PITCHf/x data on Brooks Baseball, he’s clearly getting plenty of help from opposing batters, who have swung at 35% of the total pitches he has thrown outside of the strike zone this season. It's a nearly an identical rate to the one posted by Francisco Liriano, who may be the perfect comparison for Ray’s best-case-scenario for the remainder of his career. When you think of southpaws who struggle with command, but still get hitters to chase, he’s the first name that should come to mind. The stark difference between the two at this time, despite similar results, is that Liriano boasts one of the nastiest sliders (if not the nastiest slider) in the game.

Just how good is Ray at getting opposing hitters to chase his four-seam fastball right now? According to Baseball Savant, which uses the same PITCHf/x data from MLB Advanced Media, only Aroldis Chapman’s triple-digit heat has generated a higher percentage of swings on pitches outside the strike zone among southpaws this season. That good, seriously. 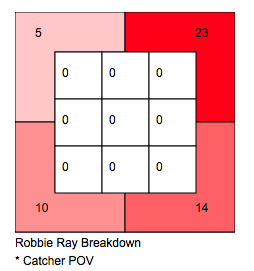 To put it bluntly, Ray’s newfound ability to coax hitters into chasing fastballs out of the zone simply isn’t sustainable long-term. At some point, hitters are going to catch on to what he is doing and avoid fishing, which has resulted in plenty of strikeouts and weak contact so far. Unless he can develop either his changeup or slider into an effective secondary pitch, he’s going to run into trouble at some point.

We all wondered what the Arizona Diamondbacks were thinking (or if they even were at all) when they acquired a plethora of starting pitchers to complement a crowded rotation this past offseason. So far the science experiment has yielded positive results, as the D-backs have the makings of a promising young rotation, headlined by Rubby De La Rosa, Chase Anderson, and Ray, who have all shown flashes of serious potential.

There is a lot to digest when it comes to understanding the change that Ray has undergone and what it means long-term, but we now have a more complete picture of who exactly he is going forward. He's hardly a finished product. However it’s clear that he’s making the necessary adjustments to become a quality major league starter. He still needs to improve both his changeup and slider, but at just 23 years old, and with his raw stuff is trending in the right direction, Ray is already making a huge impact in NL-only leagues, and becoming one of the more desirable stash candidates in dynasty leagues in the process. We could be witnessing the best stretch of Ray’s entire career right now, or we could be getting a glimpse of the start of something big.

You need to be logged in to comment. Login or Subscribe
lewist
George - always been a fan of your work here, TDG, and FFtoolbox. Great analysis
Reply to lewist
GeorgeBissell
Thanks!
Reply to GeorgeBissell