A former third-round pick by the Expos out of a Florida high school, Desmond was viewed as one of the most consistent fantasy players coming into this season. Desmond was viewed this way, of course, after three consecutive seasons where he hit at least 20 home runs and stole at least 20 bases from the shortstop position. It took him years to even get to that point, though, as his bat took some time developing in the minors. Desmond was merely thought of then as a decent hitter with poor strike zone judgement, a little pop, some speed, and enough skills in the field to play an adequate shortstop. He was always an intriguing prospect because of the tools he possessed, as despite high error totals in the minors, he always had the strong arm and range to play the six spot. Power is sometimes the last piece of the puzzle to show up, and Desmond finally broke out in the majors with 25 home runs in only 130 games in 2012 and was on a remarkable run until, well, this year.

While Desmond has consistently been a very good fantasy player for the past few years, he’s also seen his batting average, on-base percentage, and slugging percentage decline for the third straight campaign. Even with his OPS declining over the past couple of years, Desmond was able to maintain a TAv of at least .273, but this year has been his worst yet as it has slipped to a career-low .243.

His struggles against right-handed pitching actually go back to last year, which was the first time in his career that he posted a strikeout percentage above 22 percent in a single season.

Stats in this table are only against right-handed pitching.

It’s generally a big red flag when a player starts to strike out at a significantly higher clip without marked offensive improvement as the additional strikeouts can throw a bit of a wrench into the hitter’s game. That seems to be the case here with Desmond as his overall ISO has dipped nearly 50 points compared to last year. He’s also seen his BABIP and walk percentage decline. 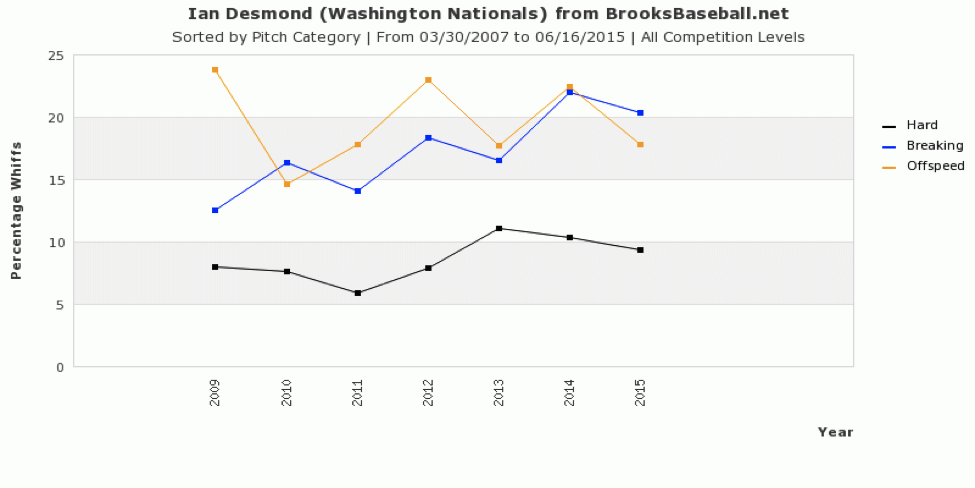 His struggles this year could have something to do with when he’s seeing these pitches as it appears the competition has made an adjustment. Last year, Desmond could sit on hard stuff when he was ahead in the count, especially against left-handed pitching, as he saw 67 percent fastballs and sinkers in that situation. This year, he’s seen just 60 percent hard pitches when ahead in the count against left-handed pitching compared to 30 (!) percent offspeed pitches (up from 18 percent in that situation last year). Desmond just isn’t seeing the hard pitches that he was crushing against left-handers last year and coupled with his struggles against right-handed pitching, it’s led to a significant decline in his production against hard pitches. He also simply isn’t getting ahead in the count as often as he’s leading all of baseball in first pitch strike percentage with 71 percent.

Stats in this table are only against hard pitches and per Brooks Baseball.

Desmond’s career line against hard pitches is so much better than his current output that some positive regression is to be expected, but again he’s brought some of these struggles on himself with the strikeouts as his strikeout percentage on hard pitches has also trended in the wrong direction as it’s increased from 25 percent last year to 29 percent this year. Despite his BABIP actually improving on hard pitches, his slugging percentage has dipped by 55 points, which is another troubling sign.

Stats in this table are only against left-handed pitching.

Of course it’s still fairly early in the season, so these sample sizes aren’t great and it’s worth noting that Desmond has been a more productive hitter in the second half throughout his career (.253/.296/.420 career in the first half compared to .285/.337/.432 in the second half). However, looking back on Desmond’s declining numbers over the past four seasons, his career seems to make more sense if we ignore his magical 2012 season when he hit .292 with a .286 TAv, 25 home runs, 21 steals, and 73 RBI in just 130 games.

If Desmond could somehow be this version of himself for the rest of this year, he would probably make a deal with the devil to do so. As it is now, he’s been moved down in the batting order by manager Matt Williams, and the pending free agent has likely cost himself some money already with his struggles after reportedly turning down a $107 million extension from the Nationals prior to the 2014 season. While there may be some hope that he’s capable of turning this around eventually, it isn’t happening this month, as he’s 6-for-52 (.115) with a hit by pitch, a sac bunt, no walks, and 21 strikeouts in June (entering play Tuesday).

The simple explanation is that Desmond isn’t producing as much at the plate because he’s striking out more, but his struggles are potentially more complex than that. After hitting 12 home runs with a slightly higher OPS on the road than at home last year, he’s completely fallen apart on the road this season as he’s hitting .175 with a K:BB ratio of 47-to-9 in 154 plate appearances on the road. How would you like it if your job was attempting to explain how that happens? Or how a guy with everything to gain from having a good season is also tanking it in the field with 14 errors and a -2.5 FRAA already? Desmond is a riddle wrapped in a mystery inside an enigma.

If Desmond was having a season even close to any of his last three seasons, he’d be a lock for a nine figure contract this offseason. Unfortunately, Desmond, who turns 30 in a few months, is going through the worst period in his major league career. It’s difficult to say exactly what kind of an impact this will have on his potential suitors even if he rebounds in the second half, but it’s clearly not a good look at the moment.

Without a second half-bounce back, Desmond is leaving his owners in a lurch, as shortstop is a rail-thin position that’s difficult to fill during the season.

You need to be logged in to comment. Login or Subscribe
timjrohr
Just traded him for Anibal Sanchez in my 16-mixed H2H (R, OPS, K, QS). More than expendable when Francisco Lindor and (especially) Carlos Correa were called up from my farm team. I may dump Alcides Escobar shortly, too.
Reply to timjrohr