For those of you who loyally read my weekly Starting Pitcher Planner column (which will return at its regularly scheduled time next week, incidentally), it should come as no surprise that I’m a fan of Charlie Morton’s work. And lately that’s been an easier position to embrace, as the sinkerballer has turned in an outstanding stretch since the calendar flipped to June. Over his past seven starts he’s thrown 45 innings of 2.80 ERA, 1.02 WHIP baseball—and that includes one poor start against the Cubs that singlehandedly accounts for 42 percent of the runs he’s allowed during the period. But what is perhaps most interesting about this string of starts is that he has bucked a career strikeout rate that hovered just north of 6.0 K/9 to whiff 49 batters across those 45 frames. Morton emerged from his Tommy John cocoon as a consistent back-end starter in medium-depth leagues last year, and looked to be on a nice path towards reprising the role again through the first couple months of this season. But the strikeout rate gains over an increasingly intriguing sample size suddenly make him a much more attention-grabbing option for mixed leaguers. So what’s going on? Where did all these whiffs come from, and is this a sustainable development?

Let’s start with the usual suspects. Quick glances at Morton’s velocity and pitch movement by month don’t yield much in the way of explanation. After seeing his two-seam velocity peak at 92.9 miles an hour in May he’s actually seen that number drop down 92.1 in June and 91.8 so far in two July starts. So that’s not moving in the right direction at all. And speaking of movement, when we take a peek at his horizontal movement we find that after manipulating about 10 1/2 inches of horizontal movement on his two-seamer back in May he’s down to about 9 1/4 inches now. Huh. So basically, Morton’s hot stretch coincides with lower velocity and less movement on his pitches, usually two signs reserved for situations in which a pitcher may be unhealthy or otherwise experiencing a period of unproductivity.

Moving on to some more in-depth data points, our first clue into what’s going on comes with a look at the amount of swings batters are taking against Morton. Here’s the month-by-month progression: 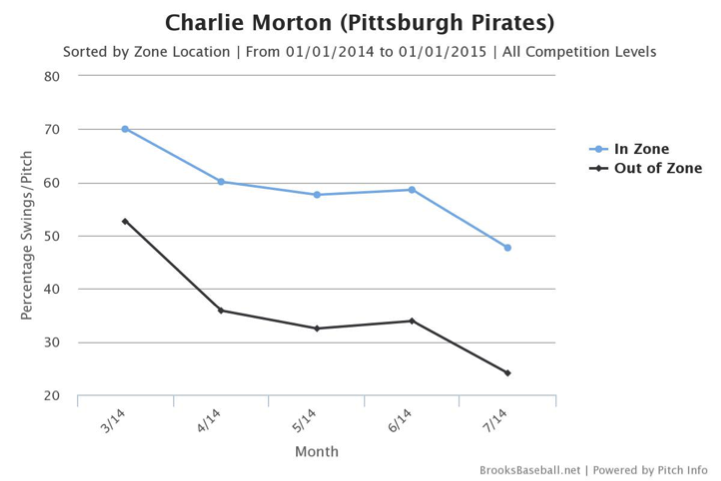 The sub-60-percent swing rates on pitches inside the zone are a career low for Morton, meaning he’s been able to generate a surplus of called strikes that, up until the last six weeks or so, he’d never had the luxury of working with before. The progression also implies that despite hitting an above-average .252 and generating a solid 1.35 WHIP against Morton over the first few weeks of the season, batters began adjusting their approach to swing less often at his pitches, despite Morton working inside the zone at a slightly higher rate during that time. That seems like a strange strategic choice, suggesting it may not be a choice at all. And to that end, check out Morton’s release point data for 2014—vertical release is followed by horizontal release in the charts below: 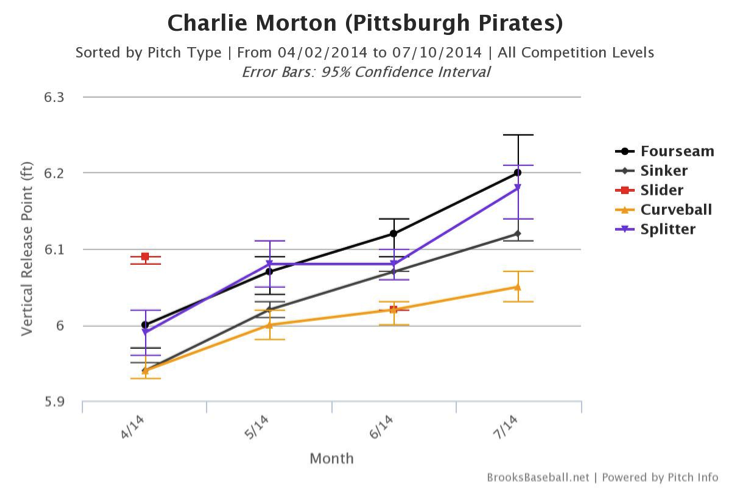 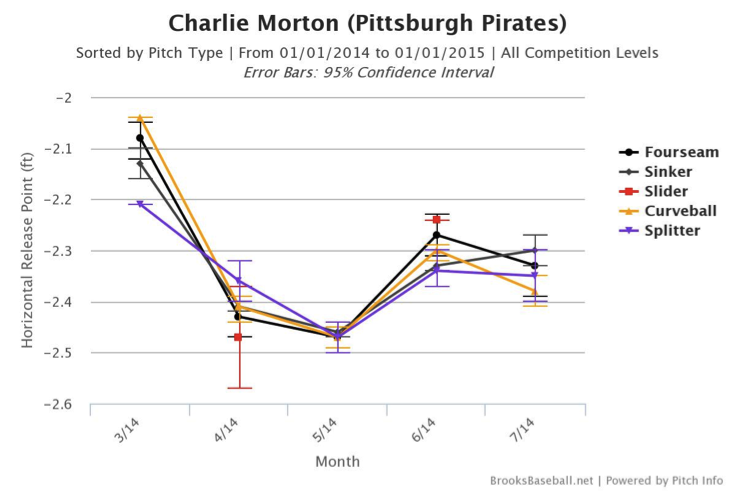 Now those are some fascinating charts. Basically as the season has progressed Morton has continuously pushed himself to better utilize his 6-foot-5 frame by staying taller in his delivery and generating a higher release point. This would certainly help to explain the decrease in horizontal movement on his pitches, and it sure seems that Morton has made a conscious decision to trade in some of that movement for better plane and deception on his pitches.

And the plan is working, as batters appear to be having a more difficult time picking up his pitches and pulling the trigger. His PITCHf/x heat maps paint the picture of a guy who’s been able to command both his two-seamer and curveball—his two money pitches—much more effectively in the lower part of the zone, particularly to his glove side, over the past six weeks. Here’s a look at a “before and after” of his two-seamer location with the first of June serving as our cutoff: 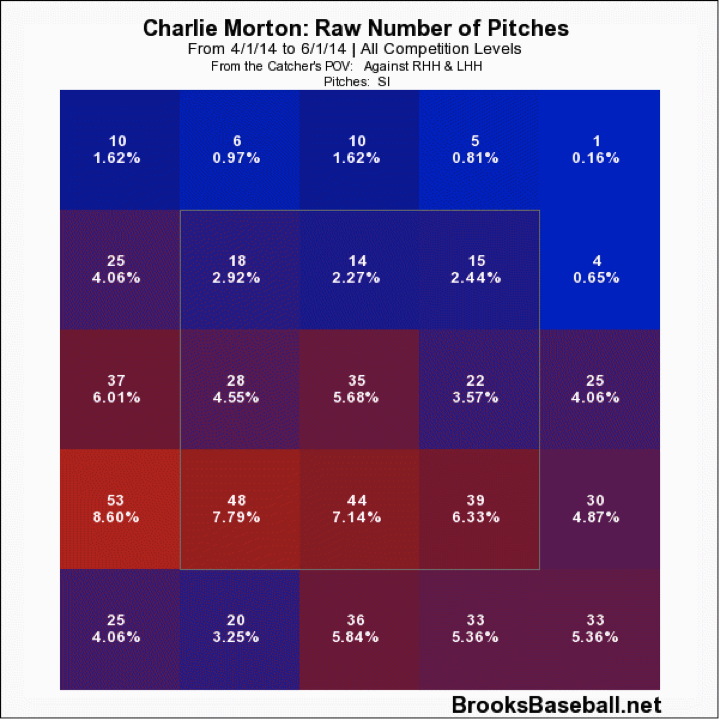 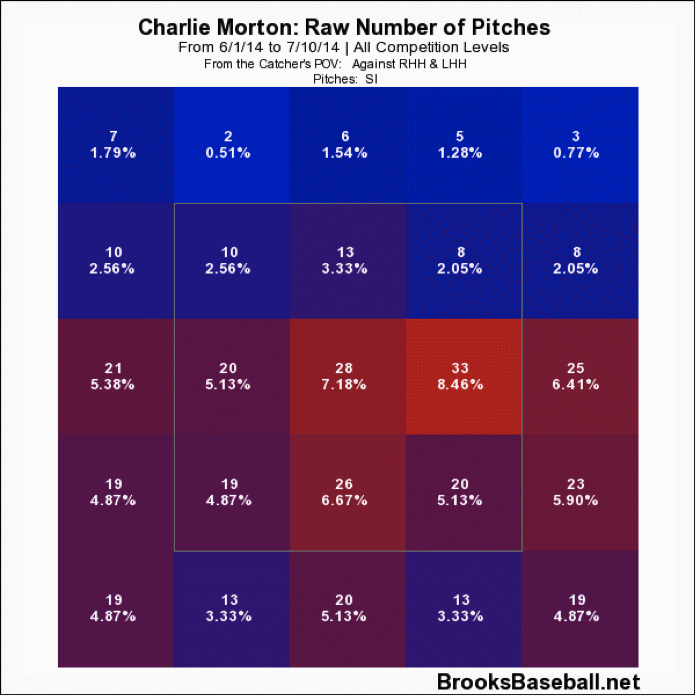 That all adds up to about a three percent increase in the number of two-seamers finding the zone, while batters have swung at a slightly lower percentage of them. Note also the new-found ability to get the pitch across the plate and add versatility to the pitch’s deployment.

And then in tandem with the mechanical transformation he’s made a notable effort to throw more curveballs (29 percent combined in June and July, compared with 23 percent through the season’s first two months). As with the two-seamer, he’s shown a much better ability to steal strikes with this pitch, but then in contrast with the fastball when he has gone out of the zone with his curve he managed to generate a significant uptick in batters’ O-Swing and whiff percentages on the pitch in June, and that was the most significant driver of his strikeout explosion.

This last point, I think, is the key point. The swing-and-miss and chase numbers on his curve have come back down over his past two starts, and in turn he has struck out a more “appropriate” 10 hitters over 13 innings. Now, we’re obviously dealing in small samples here, and in Arizona and St. Louis he was dealing with two of the more difficult National League lineups to post strikeout numbers against. But with a more favorable match-up for whiffs on tap tomorrow against Cincinnati for his final start of the first half it will be worth paying attention to how batter react to his curveball. Morton has without question made some significant mechanical adjustments to late, and signs seem to be pointing to a potential breakthrough in the works here. He’s already performed as a top-50 starting pitcher to this point yet he’s owned in just 57 percent of Sportsline leagues, and given the adjustments he’s shown the ability to make now over the better part of six weeks, he has the potential to be one of the better second-half buys you’ll find available on the cheap.