With the summer trading season in full swing, the letters “PTBNL” are about to become quite familiar. However, while many trade deadline deals include that mysterious Player To Be Named Later, recent history has taught baseball fans to disregard any such player, as they usually turn out to be inconsequential.

A few gems can sneak through the cracks, though. Michael Brantley is perhaps the best recent example of a PTBNL success story. The Milwaukee Brewers sent Brantley to the Cleveland Indians as the final piece in the CC Sabathia trade that single-handedly propelled the Brew Crew to a postseason berth, ending a 26-year playoff drought. The deal was headlined by slugging prospect Matt LaPorta, but he flamed out as a Quad-A type player, while Brantley has gone on to do damage for Cleveland at the big-league level.

Brantley has also become a burgeoning fantasy stud. His .320 TAv ranks 22nd in all of baseball, right between Carlos Gomez and Adrian Beltre. He has 13 home runs and 10 stolen bases, solidifying his status as a multi-category contributor. In fact, he’s currently the 12th-ranked fantasy player in ESPN leagues—and to think, on average, fantasy owners selected him at no. 224 on draft day. Not a bad return on that investment.

Is it time to cash out? Should owners put Brantley on the trading block, hoping to capitalize on his sky-high value and bail before the Brantley Hype Train bursts into flames and he turns back into the guy who owns a career .266 TAv and had never hit more than 10 homers in a single season before now? Or is Brantley for real, a player you should think about acquiring before owners start cementing his elite value in their trade demands?

Brantley was the quintessential tweener prospect, a guy who didn’t really have the defensive chops for center field, the arm for right, or the offensive profile for left. Thus, despite his hitting .319/.395/.398 in 2008 for the Brewers’ Double-A affiliate, the Huntsville Stars, scouts didn’t envision more than a quality fourth outfielder. Kevin Goldstein rated Brantley as a three-star prospect and slotted him as the 11th-best prospect in the Indians’ system, and in their 2009 prospect guide, Baseball America opined, “He’ll need to start driving the ball with more authority to find a regular role in the big leagues.”

The power has seemingly arrived, as he’s compiled a .192 ISO, which is essentially double his previous best mark. That ISO is accompanied by a .319 batting average, a .384 on-base percentage, 10 stolen bases, 58 runs scored, and 56 runs batted in. That’s a true five-category producer.

I’ve always adored Brantley’s approach at the plate, even throughout his minor-league career with Milwaukee. He controls the strike zone and the barrel of the bat well, and his pitch recognition is well above average. We can see evidence of this in the close proximity of his 8.2 percent walk rate and 8.5 percent strikeout rate. In fact, his 0.97 walk-to-strikeout ratio ranks among qualified hitters. His 3.6 percent swinging-strike rate also ranks sixth-best. It’s a bit of an old-school profile, but rarely striking out while drawing walks makes him an attractive player at the plate.

Brantley’s overall skill at the dish is also illustrated by his lack of struggles against same-handed pitching. He’s hitting .273/.365/.434 against lefties this season. It’s not a blinding slash line by any stretch, but Brantley still has a .162 ISO versus southpaws, and it doesn’t appear to be bloated by an unsustainable BABIP. Lefties who can confidently be penciled into the lineup everyday are luxuries.

The 27-year-old, who has affectionately become known in Cleveland as Dr. Smooth, is difficult for pitchers to face because his weaknesses are hard to pinpoint. For example, opposing pitchers cannot easily sequence against Brantley because he has found success against all types of pitches, which is illustrated here:

Fastball, curveball, slider, changeup; left-handed or right-handed. It doesn’t matter: Brantley has proven himself effective against all types of pitches this year. The numbers suggest that his overall approach is well-rounded, and it seems fair to assume that he’ll continue to hit for a high batting average. He handles the zone well and can produce against all types of pitches. In short, he’s one of those “professional hitters” for whom television announcers pine so deeply.

For fantasy owners, though, the real question lies in the expected power production in the second half. Is he the .112 ISO guy from a year ago who hit 10 homers, or is he the .192 ISO guy who’s hit 13 homers in 83 games? That’s the difference between a top-40 outfielder and a top-15 outfielder.

It seems unlikely to me that he’ll continue to hit for such power throughout the second half, as the jump is simply too much for me to buy into without much supporting evidence. The 17.3 percent HR/FB ratio is far, far above his career average of 6.6 percent. Plus, his average fly ball distance (286.55 ft) ranks only 90th in all of baseball, which is respectable, but far from elite.

(Brooks Baseball classifies at least four of Brantley’s homers as line drives. Could that be influencing his HR/FB ratio? If so, should we then assume that his HR/FB fits more with his career numbers, and thus not be as alarmed about the power spike?)

It’s also notable that Brantley’s home run power is mostly relegated to the pull side, and his home-run success has come on the inner part of the plate. Every home run has been to right or right-center field. In addition, here is the heat map of his power production: 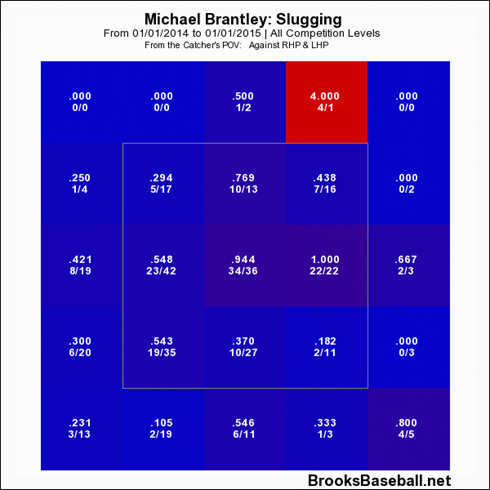 It’s not a heat map that has red splashed across it, but Brantley clearly hits for more power on pitches that are middle-in and up. If opposing pitchers recognize that, they may start to pound him at the knees or on the outer part of the plate in an effort to limit his home-run potential. Fortunately for fantasy owners, though, he can still hit for a high average in those locations, and his approach at the plate is advanced enough that he could continue to work himself into favorable counts where pitchers do have to come in the zone with pitches he wants.

Overall, though, even without the power, Brantley can still be a quality fantasy producer. He will offer a batting average north of .280 with double-digit stolen bases and help in the runs category. That’s precisely what he was a year ago, and he was a top-40 fantasy outfielder then. Thus, the downside seems remarkably low, which makes me much more comfortable when making a potential offer to a competitor.

I’m not going to suggest buying Brantley because he’s at his absolute maximum value and the price will be lofty, but nor am I about to suggest selling high. He appears poised to have productive second half, providing fantasy value in at least four categories—and perhaps even five categories if the power spike continues. The approach is too good and the skill set is too polished for him to collapse too heavily in the second half of the season. You can label me a Brantley Believer™. He’s been labeled a PTBNL and “nothing more than a fourth outfielder,” but it’s time to recognize him for what he is: a damn good hitter who’s valuable in almost any league. Owners should not be itching to “sell high”—they should kick up their feet and watch Brantley quietly produce for the remainder of the year.

Thanks to commenter David Schwalb for suggesting an article on Brantley. Please leave your suggestions for future articles in the comments or on Twitter.