Two Closer Candidates Change Leagues
Ernesto Frieri and Jason Grilli switched teams, as the LA Angels and Pittsburgh Pirates swapped relievers whose seasons had been subpar. We know the story with both of these guys at this point: Frieri has severe issues with the long ball when he’s missing with his fastball, and Grilli has been inconsistent with his command, as he’s been the unfortunate combination of walk-happy and hittable. In terms of proximity to saves, Grilli is the better bet, as there aren’t many good options in Anaheim, and Frieri will have Mark Melancon in front of him. I might be out on both at this point.

The White Sox Mess
Ahhh, White Sox bullpen. I’ve forgotten your scent. The Ronald Belisario show has come to its final and unfortunate end, as the big-faced righty gave up two runs (one earned) and recorded one out against the Blue Jays en route to recording that all-important hold. There was a time where Belisario’s ERA was under 4.00, but a chart of his game-by-game ERA would look like a deep V, as his ERA and peripherals have boomeranged from respectable to just bad. This is the part where I give you a few names to consider at the back end of this bullpen but, well, there aren’t any names I feel good about here.

Zach Putnam has a good splitter and a WHIP of 1.08. He’s the next logical choice, but I’m starting to think the White Sox closer job is just straight-up cursed.

Sergio Romo Sad Face
He’s been called the Greg Maddux of closers in the past, and his “I Just Look Illegal” shirt has endeared him to me eternally but, well, Romo is out as the Giants closer. I think he eventually gets the job back, as his peripheral numbers were okay. He has a 20.5 percent strikeout rate and a 5.5 percent walk rate, coupled with a 1.02 WHIP. The home runs are a concern, as are his meltdown appearances. It’s possible that Romo has lost something midseason, which would render his past performance useless here, but I don’t think so. If you’re hurting for saves, go after Santiago Casilla for a week, but I fully expect Romo to rebound and reclaim the job.

Jake McGee in Tampa has a 32.1 percent strikeout rate and a WHIP of 0.79. Grant Balfour is doing better, but that’s a low bar. I think McGee has this one wrapped up.

Joe Nathan has given up earned runs in two saves since we last spoke. He still looks bad, and I think Joba Chamberlain might get another crack at it.

Chad Qualls is still really good, which is confusing the hell out of me.

The same can be said of Zach Britton.

Hector Rondon is still the closer for the Cubs. His ERA is creeping up after a disaster outing against Cincinnati, in which he gave up five earned runs in two-thirds of an inning. Neil Ramirez is still pushing him.

Let’s say Huston Street goes down with an injury (likely) or gets traded (also likely). The natural bet is on Joaquin Benoit to get the saves in San Diego, but I’d keep an eye on Alex Torres as well. If he starts to find some sort of control, he’s got the stuff to close.

The Snapshot: An Infographical Look at Every Team's Closer Situation. 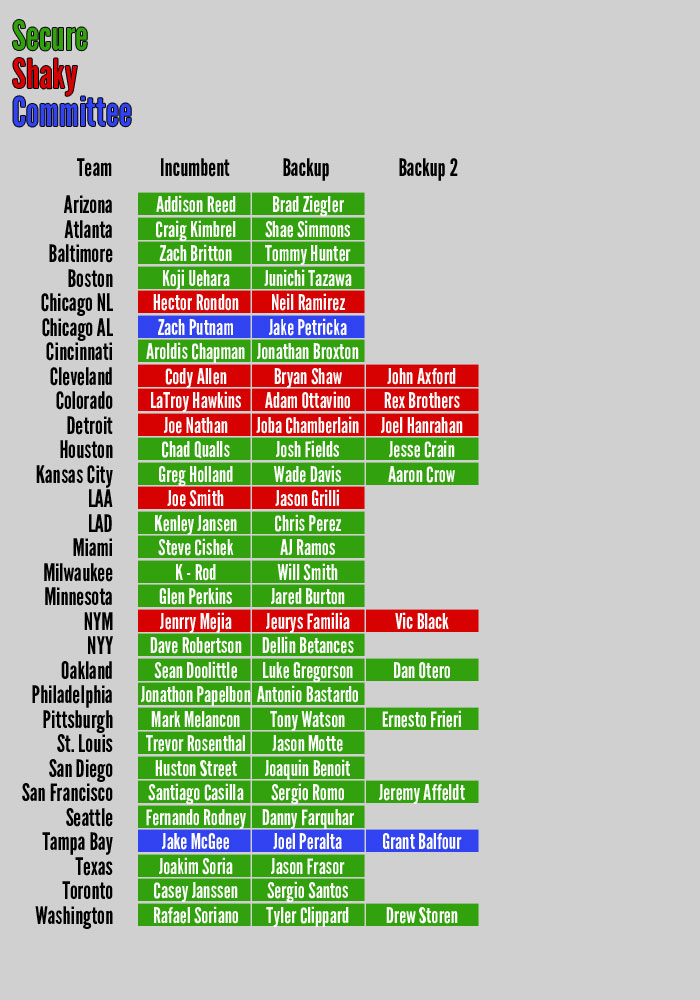 You need to be logged in to comment. Login or Subscribe
Carosella
I think San Francisco should be Blue, not Green.
Reply to Carosella
bsmith316
I agree. Casilla hasn't even had a save opportunity since they removed Romo.
Reply to bsmith316
D1Johnson
It would be nice if this information was synchronized with the Depth Charts.
Reply to D1Johnson
BrettLarter
Love the inclusion of the infographic. How confident are you that Hunter is the O's second option, not O'day?
Reply to BrettLarter
mdupske
Could there be column in the graphic of where they were previously? (last week?)
Reply to mdupske