This year’s player profile for Fernando Rodney closed with this note: “The Rays' 2013 option on Rodney pays him $2.5 million. If he's only half as good as he was last year, he'll still be a bargain.”

So far, the Rays, their fans (save your tired jokes), and fantasy owners wish he was even a fourth as good as he was last year. The Archer is struggling to hit his targets in 2013.

Last season’s 417 opponents’ OPS has more than doubled, moving up to 836 in 2013. He is permitting hitters to get on base at a .373 rate, getting fewer swings and misses, enticing fewer overall swings from hitters, and getting fewer chases. The life on Rodney’s pitches is visibly different, and the fact that hitters are swinging at his pitches out of the zone just 23 percent of the time this season compared to 34 percent in 2012 is evidence of diminished movement.

While watching Rodney pitch, you can see that his mechanics are all over the place. In 2012, his primary delivery involved what essentially was a slide step toward home plate, as demonstrated here:

In the World Baseball Classic, Rodney began to incorporate a bit of a toe tap with his front leg in his delivery:

Most recently, that toe tap became a bit more extreme, as he demonstrated in his latest outing when blowing a save against Toronto:

Doug Thorburn had this to say about Rodney:

I have never liked Rodney's delivery, even last season when he wore the glass slipper. His posture is atrocious this year, and has been rough his whole career, but last season he was able to minimize the tilt to merely below average (40-45 grade instead of this season's 30-35 grade posture). I also abhor the slide step, and Rodney uses it even from the windup, which is just offensive to my mechanical sensibilities. I would say that at least he only needs to harness one timing pattern, but he is still slower from the windup despite using the slide step.

Compared to last year, the other big difference that I notice is balance. Rodney actually had okay balance last year, at least up until the point that his head bailed out with spine tilt. He leaned over somewhat during the early phases, but this season that imbalance is greatly exaggerated. He hunches over more at the beginning of the motion, and finishes with worse tilt, so his head is drifting much further from the third-base side to the first-base side throughout the delivery. It is a surefire recipe for an inconsistent release point.

Thorburn offered these images up to show the differences in tilt with Rodney. The image on top is from the 2012 season while the image below it is from the pitch on Monday night that led to the J.P. Arencibia home run, and the differences are rather stark: 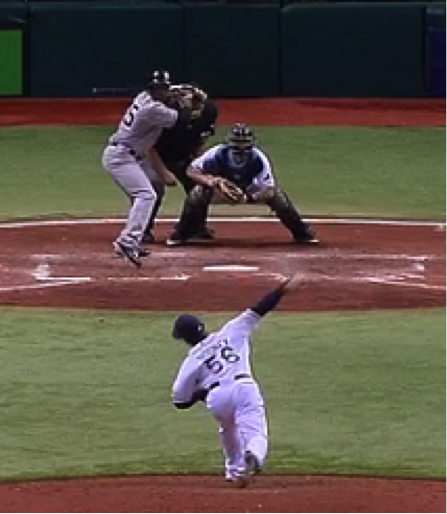 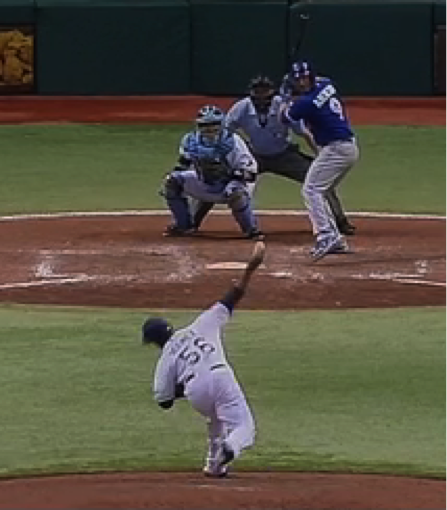 Last year, Rodney’s delivery out of the stretch had a quick slide step look to it. This year, he’s doing the same type of thing, but the toe tap, or taps … his foot moves to the third-base bag. That pulls his direction off and he throws across his body a little more as he finishes. The same type of fastball is not there on his fastball this year compared to last year, and that can be caused by throwing too far against your body. My guess is he is having a little trouble commanding to his glove side. This is an easy fix, and he might not even be aware he is doing this. Jim Hickey is one of the best pitching coaches in the business, and I’m sure he can help him get rid of this.

Lastly, the latest Episode of TINSTAAPP included a lengthy segment about Rodney, as it was recorded after the blown save Monday night:

Hard to buy in to any WBC workload hangover. I see the same crappy delivery I saw two years ago. He looks like a wreck; his posture and balance sucks. He’s not hitting his spots because he can’t repeat his release point right now. Last year, whether it was timing or better balance, he did it. Part of what made him so good last year is that he is in an organization that knows how to teach pitchers. He had the best balance and posture of his career. There’s a bit of overthrowing as he’s relying on his arm to throw through his struggles. When you lose sight of your body and try to ramp it up with your arm, you get into trouble.

In talking with some people at the ballpark last night about these mechanical issues, the team was surprised to see the exaggerated toe-tapping in Rodney’s most recent outing. This is yet another mechanical change for Rodney, who has already altered his starting position on the pitching rubber a few times in this young season, apparently in a self-directed effort to cure what ails him.

The Rays say they are working with Rodney to get him re-aligned to where he was last year. Hopefully, that can get Rodney back on track, as the closer is just one piece of what has been an awful bullpen of late for the Rays, who are losing leads and games they are not used to losing in recent weeks. Fantasy owners would be grateful to have Rodney piling up saves rather than watching the Rays go to another option in their pen. If that happens, a new pitcher could lead the team in saves for the ninth consecutive season.

You need to be logged in to comment. Login or Subscribe
timber
People seem to forget that, when it comes to Rodney, last year was the outlier, not the norm.
Reply to timber
moonlightj
Statistically speaking, sure. But if those stats are changing because he's changing mechanically, for the worse, then we have to focus there first. He is creating a lot of his own misfortune.
Reply to moonlightj