Robinson Cano had a rather amazing 2012 season. In terms of his WARP, his 6.4 score was the best of his career. In fantasy dollars, it was his third consecutive season of earning $30 or more in AL-only leagues, further cementing his status as a first round pick in either AL-only or mixed-league formats.

Yet, Cano’s 2012 season was not without flaw. It actually was not tough to find the major flaw in his season despite the overall numbers. It was his amazing .359/.423/.685 slash line against right-handed pitching that masked a batting average against lefties that was 61 points below his career average, an on-base percentage that fell 34 points, and  a slugging percentage that fell 138 points. The .239/.309/.337 slash line Cano had versus left-handed pitching in 2012 was well below the .300/.343/.475 line he had established in his previous 1393 plate appearances against portsiders.

By no means should single-season splits be considered predictive, however; the bigger picture is still infinitely more important. If we look back at 2010, Wilson Betemit hit .312 against lefties after a career of futility from that side of the plate and proceeded to return to those doldrums each of the following two seasons. Cano’s 269 plate appearances against left-handed pitchers in 2012 represent just 16 percent of his career total. So are his 2012 struggles against lefties just single-season noise or has the league picked up on something that Cano will have to adjust to? Let’s review some obvious questions that come up when players pull a stinker out of their hat.

Has he gotten pull-happy?
Hitters will sometimes get pull happy if they are struggling with pitches on the inner-half, which leaves them susceptible to pitches on the outer-half. According to Baseball-Reference’s Play Index, in his career Cano has put 59 percent of his balls in play against lefties up the middle, 21 percent of them to right field, and 19 percent the other way. His 2012 numbers match up rather well with those percentages.

Cano is indeed pulling the ball a bit more than he has in the past, but not that much higher than he did as a rookie. The dimensions in Yankee Stadium to his side of the field are nearly equal to what they were in the old building, so this is not, however, a matter of him changing his approach to take advantage of those very inviting seats in right field.

Is he being more selective?
The Bill James Baseball IQ app for smartphones has many useful functions, including showing locations where hitters pick up hits in the strikezone, where they strike out, and which pitches they swing at. First, let’s compare his hit zones against southpaws from 2007 through 2012 to just the 2012 season:

Next, let’s examine what parts of the strike zone Cano picked up his strikeouts when facing left-handed pitching.

For the most part, Cano’s numbers in the small sample size of 2012 line up rather well to his overall rates, outside of striking out a bit more frequently taking strike three in the zone.

Lastly, let’s examine which pitches from left-handed pitching entice Cano to swing in the same format:

Once again, the rates from 2012 hold up against his career rates. He did not become more of a free-swinger; in fact, he became a bit more selective in the strike zone, perhaps to a fault.

Are lefties pitching him differently? (Pitch data from TexasLeaguers.com)

For the sake of simplicity, let’s group the pitches into hard stuff, breaking balls, and change-ups. Same-handed change-ups are a rarity; pitchers that throw them tend to use the pitch much more frequently to opposite handed hitters than same-handed hitters. Cano, historically, has swung at the pitch quite often, but he cut back in 2012 and made more contact on those pitches when he did so. This is not terribly surprising, as Cano is one of the better examples in the game of a hitter staying back on the ball. In terms of handling breaking balls, he swung at a smaller amount of them than he has in the past and made the same amount of contact as he has in past years. Even then, the league threw him slightly more breaking balls in 2012 than they had in the past.

A somewhat noticeable change is in how he handled the hard stuff. Cano swung less frequently at this group of pitches than he had in previous seasons but also made less overall contact. Before 2012, left-handed pitchers threw the hard stuff 51 percent of the time against Cano, but that usage spiked up to 64 percent last season as teams picked up him making less contact against those types of pitches than he was with breaking balls or off-speed offerings.

How was his production affected?

BaseballHeatMaps allows us to compare run value production for hitters across periods of time. The image below compares Cano’s 2012 season against his production from 2007 to 2012. The blue zones represent areas in which Cano experienced a large decline in run value last season compared to previous seasons. 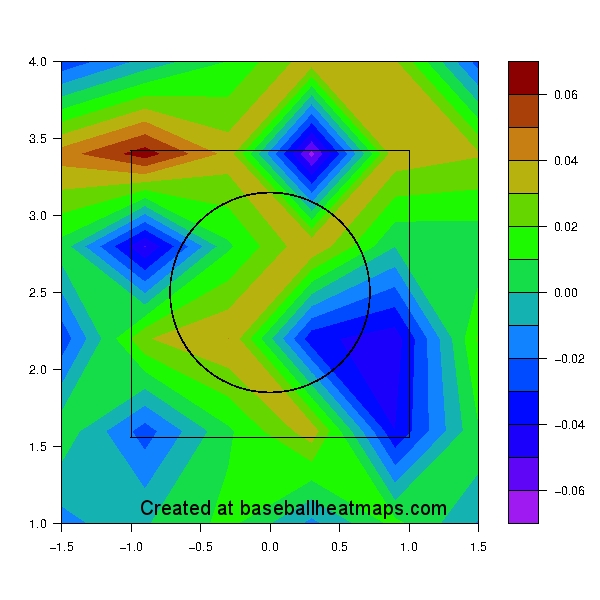 If we look back up at the selectiveness image, we recall that Cano did not change his approach in how he attacked pitches in nearly every part of the strike zone. His production in certain parts of the zone, however, did indeed decline. The largest of the blue zones also happens to be an area in which lefties tend to throw more two-seam fastballs, front-door sliders, and cut fastballs. The blue zones on the outer half represent areas in which pitchers will throw put-away sliders or cut fastballs off the plate to get weak contact.

In 2013, it will be interesting to watch how lefties attack Cano and if these 2012 issues are something the league has picked up on. If that is the case, it will also be interesting to see if Cano can adjust to the adversity. It has not affected his draft status in the slightest, though, as Cano’s average draft position at MockDraftCentral.com still has him comfortably in the first round. Our own Derek Carty even took him fifth overall in a recent industry mock draft.  This will be one of those games within the game to pay attention to in 2013 to see if 2012 was simple single-season split noise or the league adjusting to one of its best overall hitters.

You need to be logged in to comment. Login or Subscribe
wendtm
"The dimensions in Yankee Stadium to his side of the field are nearly equal to what they were in the old building, so this is not, however, a matter of him changing his approach to take advantage of those very inviting seats in right field."

Jason, no, they're not. The power alley in RF is crazy short, and has clearly affected the way Granderson and Tex do business. It would not surprise me if this has impacted Cano's approach as well, though he seems more disciplined and probably maintains more of a line-drive hitter's approach/self-image/mentality than the other two guys. Still, as players age they often tend to hit for more power and Cano has been increasing his HR totals, so this might infect him going forward.
Reply to wendtm
moonlightj
I was using this information for the dimensions. 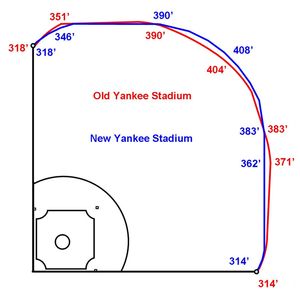 The RCF fence is 3% closer at one point but everything else is very close.
Reply to moonlightj
BurrRutledge
It's almost like the wall in right has been moved up to the old warning track. Almost.
Reply to BurrRutledge
wendtm
3% doesn't sound like much, nine feet does.
Reply to wendtm
straymond
One of the most insightful articles I have ever read at BP. Wow! simple question what was his BABIP vs LHP in 2012 as against his career rate?
Reply to straymond
moonlightj
thanks