Ryan Franklin was a starting pitcher for just three full seasons in the major leagues. In 2002, he worked in a swing role for the Seattle Mariners. In 2003, he surprised many by posting a 3.57 ERA during a season in which he struck out just 99 hitters and walked 61 more over 212 innings pitched while allowing 34 home runs. His FIP that season was a staggering 5.24, and that 1.67 run difference is the largest difference for any starting pitcher with at least 150 innings of work since the 2000 season.

Franklin’s improbable season is just one of 32 instances of a starting pitcher’s ERA coming in at least a full run under his FIP over the past 13 seasons.  The talent on that list of pitchers covers the entire spectrum of notable to awful; both Johnny Cueto and Joe Mays are on this list.

You may notice that just three names appear twice on this list: Tom Glavine, Barry Zito, and Jeremy Hellickson. Zito accomplished the feat in non-consecutive seasons in 2002 and 2006, while both Glavine and Hellickson did so in back-to-back seasons.

We are trained to be skeptical of pitchers that outpace their FIP in any given season, but how much of a panic button do we press when a pitcher does it in consecutive seasons?  Glavine had his back-to-back seasons at ages 35 and 36. In 2003, at age 37, his ERA spiked to 4.52 as he allowed more hits than innings pitched, missed four starts due to injury, and struck out just 82 batters while walking 66 in 183 innings of work. It was the first time he struck out fewer than 100 hitters since 1989 and was something he would recover from over the next three seasons, posting sub-4.00 ERAs in each. Even during the 2002-2003 seasons, Glavine was walking a fine line; his strikeout per nine rates were 4.8 and 5.1 in those seasons which left a lot up to batted ball outcomes.

In 2002, Zito stranded everyone, won 23 games and the Cy Young for the A’s, but saw his ERA jump from 2.75 to 3.30 as he became more hittable and a little more wild. In 2006, he posted a 3.83 ERA despite 327 runners on base in 221 innings of work. Zito then, as Hellickson does now, enjoyed a friendly pitching environment and also happened to line up an “improved” 2006 season with free agency before cashing in with the San Francisco Giants.

In 2011, Hellickson held opposing hitters to a .209 average in 189 innings of work but walked 9 percent of the hitters he faced while striking out just 15 percent.  Opponents found him easier to hit in 2012, batting .240, but he lowered his walk rate to 8 percent while increasing his strikeout rate to 17 percent.  The only change Hellickson made to his approach between the two seasons was incorporating a cut fastball as a fourth pitch to complement the fastball/curveball/change-up mix that he reached the major leagues with.

Compare that to someone like Zack Greinke, who has a .359 wOBA during the same time span. In terms of batting average on balls in play, Greinke has a .356 BABIP with runners in scoring position but just a .317 mark when nobody is on base. Last season, Greinke’s BABIP rose 67 points when runners were on base, which was the third straight season his BABIP with runners in scoring position outpaced his overall BABIP.

How does Hellickson do what someone as accomplished as Zack Greinke has failed to do? In looking at batted ball outcomes, Hellickson has been able to generate both higher groundball rates as well as higher infield fly rates when pitching with runners in scoring position. Last season alone, his groundball rate was 38 percent overall but jumped to 47 percent with runners in scoring position, while his infield fly rates were 14 and 17 percent, respectively.

The following scatter plots (courtesy of @sandykazmir) show where Hellickson located his pitches in 2012. The red dots represent pitches thrown with runners in scoring position while blue represents all other pitches. 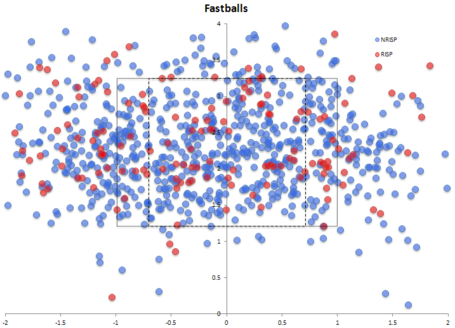 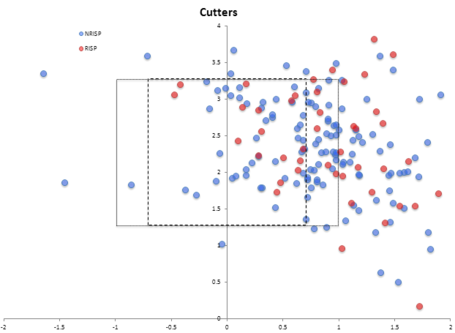 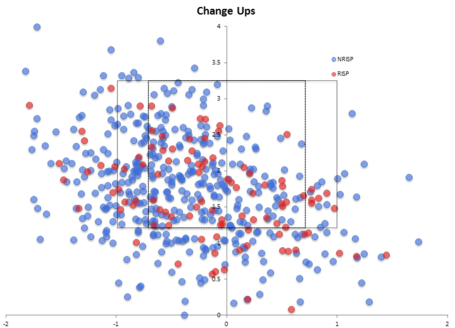 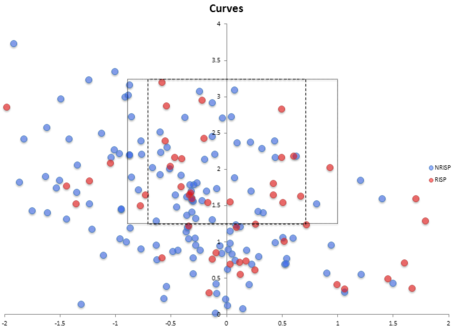 Hellickson appears to do a better job of keeping his fastball down with runners in scoring position, which would explain the increased groundball rate in that split, but the other pitches do not show any kind of noticeable trend.

In terms of DIPS theory, Hellickson steps up his game when runners are on base. The table below shows his home run, strikeout, and walk rates with runners in scoring position in 2012 compared to his overall rate on the season:

The increased walk rate is something that is not a reduction in skill but rather something intentional. As you watch Hellickson pitch, rarely does he give into hitter counts or pitch traditionally. It is not uncommon to see Hellickson double or even triple up on his excellent change-up. Sometimes that produces ugly swings-and-misses, but it can also lead to walks when he does not want to challenge a particular hitter with fastballs. It is not unusual for Hellickson to work the extreme fringes of the strike zone against stronger hitters and be content in walking them in order to face a weaker hitter that he feels more comfortable facing, maybe in attempt generate a double play or induce weak contact resulting in a shallow fly ball that cannot bring a runner in from third base.

Asking Hellickson to strand at least 80 percent of his runners for a third straight season is asking him to defy history and everything we know about regression of statistics. Just because something has never been done, however, does not mean it cannot be done, but there appears to be a good mix of process and luck with what Hellickson has done so far in his career. In just over 400 innings of work, hitters have a .244 BABIP against him, and he has stranded 82 percent of his runners. Last season, fantasy players were fearful of regression, and he changed up his process and repeated his unlikely success. Even if you do not draft him, you should still tune in to watch Hellickson pitch to watch how he does it rather than just rely on the eventual regression.

You need to be logged in to comment. Login or Subscribe
surfdent48
He has an amazing and very lucky defiance of the laws of averages and I would definitely not draft him.
Reply to surfdent48
adenzeno
Are the plot charts a catcher's view or the pitcher's?
Reply to adenzeno
moonlightj
from the catcher's POV
Reply to moonlightj
draysbay
Here's a look at his RV/100 by Base State if you guys think that might be useful:

He's basically been his least effective with the bases empty while being able to "turn it on" as the bases add runners. I have no idea if that's sustainable, but my guess is that you see a similar story from 2011, as well.
Reply to draysbay
moonlightj
thanks for adding these numbers
Reply to moonlightj
jfranco77
Should we look at this the other way? As he matures, maybe he learns to 'focus' just as well when there are no runners on base?
Reply to jfranco77
tombores99
Great work on a fascinating topic, Jason.

Just an observation, but part of the explanation for his success with runners on could be mechanical.

I feel that Hellickson has a better delivery from the stretch because he brings more momentum with runners on base, which acts to lengthen his release point - which means later relative pitch-break, giving batters less time to identify the incoming pitch.

Why Helix doesn't use his stretch-momentum from the windup is somewhat perplexing, but he probably feels like he can repeat his timing more consistently with the slower motion.

Reply to tombores99
moonlightj
Thanks, Doug. Do you happen to have gifs that best show what you're talking about?
Reply to moonlightj
tombores99
I am sending a set of them over the electronic mail right now. Take a look and tell me what you think!
Reply to tombores99
mattcommins
Awesome information! Based on your feedback, I'll be targeting Helix as a sleeper pick in 2013. Any update on the gifs? I'd love to see them.
Reply to mattcommins
moonlightj
Here you go

Reply to moonlightj
Dodger300
I have always thought that it is unrealistic to assume that a pitcher would show the same ability throwing from both his wind up and his stretch. The mechanics of each are significantly different.

It is like expecting a switch-hitter to have equal success from both sides of the plate.

While there very well may be some correlation, it is also highly likely that there will be noticeable differences.
Reply to Dodger300
moonlightj
Indeed - and the results of which vary greatly. Greinke's numbers are particularly intriguing because earlier in his career, it wasn't a problem but over the last few seasons, the gap between his BABIPs continues to grow. Maybe that's why he's talking about inducing more flyballs these days :)
Reply to moonlightj