Last week, after the Rays were no-hit for the fourth time in four seasons, Jonah Keri and I traded gChat messages back and forth as he penned this piece relaying 27 perfect things about the game. One of the facts in there was related to the increasing strikeout rates in baseball and how 2012 has seen the highest strikeouts per nine as well as the highest strikeout percentages for pitchers in baseball history.

There are many theories as to why this is happening, but the data to support the theories varies wildly. Some suggest that the shame from striking out is diminished these days and players are less patient at the plate, in a rush to crush the ball to or over the wall. Yet, the numbers simply do not support that theory.  At the turn of this decade, batters saw 3.75 pitches per plate appearance; over the past three seasons, they are averaging 3.82. That equates to seeing just 37 more pitches over 600 plate appearances.

Others have speculated that the phenomenon is related to the increased usage of relief pitchers, but that too does not hold up when examining the data. In fact, the percentage of innings thrown by starting pitchers and relief pitchers has remained rather consistent since the league last expanded in 1998: 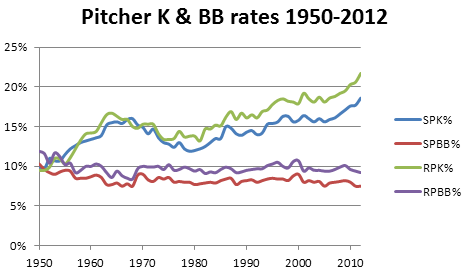 Another theory is that pitchers are not as afraid to challenge the strike zone in these post-PED days, but that too does not hold up to the data at hand. Over the past 15 seasons, the percentage of strikes thrown by pitchers has been 62 or 63 percent nearly every season. Pitchers threw just 61 percent strikes in 1999 and 2000 but have not been that low since. Additionally, the league-wide strikeout-to-walk ratio has stayed within a range of 1.68 to 1.71 each season. 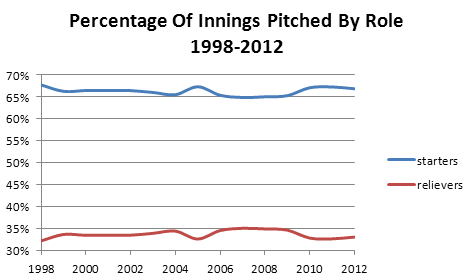 The strikeout rate for relief pitchers is growing, but it’s growing at the same rate as those of starting pitchers. We are seeing some amazing strikeout performances by the likes of Aroldis Chapman and Craig Kimbrel this season, but we should remember that we’ve seen these types of seasons before from pitchers like Billy Wagner and Brad Lidge.

In fact, the percentage of relievers that have struck out at least 70 batters in a single season has not shown much volatility in recent years. In 1998, 39 different pitchers met the criteria—the most to have done so over the past 15 seasons. The average total in that same time span has been just 32.2, and in 2012 only seven pitchers have eclipsed the benchmark: Chapman, Kimbrel, Kenley Jansen, Ernesto Frieri, David Hernandez, Jason Grilli, and Tim Collins.

The point of this entire exercise was to show that the game is changing… but not in the way we would like to think it is. Batters are not that much more patient today than they were 15 years ago, and swing data tells us that the league has swung at roughly 46 percent of pitches thrown each season. Relievers do continue to outpace starting pitchers in the percentage of batter that they strikeout, but they are not pitching any more frequently today than they did at the turn of this millennium.

Using relievers to supplement the shortcomings of a fantasy starting staff has long been a tactic successful fantasy players use, but the risk in the strategy continues to be figuring out which pitchers can help. Drafting the Chapmans and the Kimbrels are easy to do, but it is tough to imagine anyone drafting Collins or Grilli and expecting this type of invaluable production in AL- or NL-only leagues.

You need to be logged in to comment. Login or Subscribe
Kinanik
Has there been any variation in the strike zone?
Reply to Kinanik
redsox2011
Maybe the trend is that Umps have a bigger strike zone
Reply to redsox2011
goiter6
Dumb question - what is the time frame for the pitchers going through little league with the pitch count rules in place to be reaching the majors? Seems like there should be an expected bump in the quality of pitching (IE strikeouts) at the major league level if little league does a better job of keeping kids' arms healthy.
Reply to goiter6
brianjamesoak
The fascinating thing about that first graph is that even the little year-to-year dips and bumps seem the same for RPs and SPs. There are clearly things that affect all pitchers; it's not just some general trend.
Reply to brianjamesoak
pobothecat
This right here strikes me as an important obvservation.
Reply to pobothecat
TheRedsMan
Has average velocity and/or pitch type distribution changed?
Reply to TheRedsMan
rrvwmr
Players throw harder now and have better information on hitters. Both of these things correlate to higher strikeouts. I remember watching the Cardinals in 1998 and they brought up a bullpen arm (Rich Croushore) that excited me because he could throw in the low to mid 90's. I may be misremembering, but there may have been 1 other guy on that team that broke 90 w/ regularity. Now nearly everyone breaks 90. Hitters have had a more stagnant 20 years. They exchanged contact for power for the first half and now just seem to be slowly losing that power w/out gaining much.
Reply to rrvwmr
moonlightj
Did this velocity change just start in the last five or so years? I absolutely think velocity has something to do with it, but this has been a growing trend since the late 70's that has ramped up in recent seasons.
Reply to moonlightj
Tom9418
If K/BB is constant, bigger strike zone doesn't seem to hold up. When MLB as an aggregate moves in the direction of less K aversion, this could be producing different hitters in aggregate.

This doesn't explain the little blips.
Reply to Tom9418