Yesterday, Jason Collette penned an article about infield flies that ties in with a discussion I’ve been having over the past few weeks with one of my former writers at The Hardball Times Fantasy, Jeff Gross, and one of his readers, Alex Hambrick. Additionally, BP readers JoshC77 and kcshankd wondered in the comments section of Jason’s article whether the ability to induce infield flies was a repeatable skill for pitchers. Today, I thought I’d try to answer that question and present some of the research I’ve conducted in my conversations with Jeff and Alex.

Earlier this year, I wrote an article entitled “When Pitchers' Stats Stabilize,” in which I looked at how “stable” (or how “repeatable,” in terms of being a “skill”) a number of stats were—infield flies among them. In the article, I found that infield fly balls, as a rate of total batted balls, took roughly 0.6 years to “stabilize.” In other words, this initial research suggested that infield fly-ball rate was indeed a very repeatable skill. But in my discussions with Alex, I’ve come to suspect this may not necessarily be true—or at least not in the way my previous research suggests.

In one e-mail, Alex wrote:

While we’ve certainly known that there is a correlation between total fly balls and infield fly balls (due in large part to the vertical location and movement of a pitcher’s pitches, forcing batters to put the ball in the air), this presented an interesting question: “Is infield fly rate a skill above and beyond a pitcher’s skill in simply allowing fly balls in general?”

To help answer this question, I decided to pull out my old friend, the split-half correlation (if you’re interested, you can read all about the methodology in the “When Pitchers' Stats Stabilize” article). What I’ve done is run two separate analyses. In the first, I’ve run a split-half correlation using infield flies per contacted balls (henceforth referred to as IF FB%) in both halves. In the second, I put IF FB% in one half and put all flies multiplied by .07 (roughly seven percent of flies are of the infield variety) per contacted balls (henceforth referred to as FB*.07) in the other half. So essentially, I’m first correlating IF FB% with itself and then correlating it with fly-ball rate. This gives us the following results:

That’s very interesting. While the differences are small, IF FB% actually seems to be less stable than simply using a league-average percentage of infield flies per total flies. Since multiplying by .07 doesn’t affect the correlation (I’ve just included it to better illustrated the point that this is an estimate of infield flies), what this essentially tells us is that fly-ball percentage better predicts infield-fly percentage than it can predict itself.

Let’s check out one more way of looking at infield flies. We know that total flies stabilize very quickly, so perhaps infield flies per total flies (henceforth referred to as IF/FB) will prove useful.

Nope. While the percentage of total flies (FB%) stabilizes extremely quickly (as quickly as groundballs do, for what it’s worth), it takes the average pitcher two and a half years for his IF/FB rate to stabilize. That means we can throw IF/FB rate out the window entirely—we’d be far better off using either IF% or FB*.07.

We could stop here and have learned something useful, but we can do a little better yet. What these split-half correlation tests give us is the point at which the stat produces an R of 0.50. Using this data, we can create a regression to the mean equation and estimate a player’s true talent level. While the easiest mean to regress to is always the league average, it’s rarely the best. As Alex posited, and as has been known for a while now, fly-ball rate and infield-fly rate are correlated. As such, we can reexamine this relationship and then use our results as the mean we regress to. 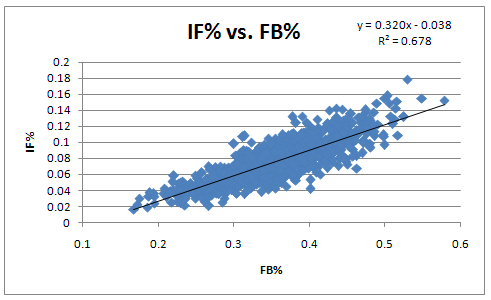 As you can see, the relationship is very strong (r-squared of 0.68). Pitchers who give up a lot of total flies also manage to induce a lot of infield flies. The most extreme fly-ball pitchers actually manage to convert nearly 10 percent of all contacted balls into popups. So instead of regressing each pitcher to league-average fly-ball rate, we can regress each pitcher to his own unique rate based upon this relationship.

Now we get to the fun part: applying all of this to actual players. Ideally, we’d use multiple years, incorporate aging, weighting, etc., but I’m just going to do it simply. What I’ve done is used a pitcher’s actual, unregressed 2011 fly-ball rate to create his personal mean based on the formula above. I’ve then regressed his 2011 infield-fly rate onto this mean based upon the split-half correlation tests we ran at the beginning of the article. When I do this and focus on all pitchers who made at least 10 starts this season, here are the pitchers with the best infield fly ball “true talent” levels (rIF%):

That’s an interesting name at the top of the list. When we think about top pitchers, Guillermo Moscoso isn’t the first guy that comes to mind. While his strikeout and walk rates are underwhelming, he’s an extreme fly-ball pitcher, which will allow him to induce a lot of popups. There are some other not-so-terrific players on this list (Collmenter, Matusz, Tillman, Cecil, Hughes), but since they all have posted high fly rates, they’ll at least be useful in terms of inducing popups and keeping a lower-than-normal BABIP. Jered Weaver—sort of the poster boy for using infield flies to beat his FIP—ranks second on the list, and long-time pop-up artist Clayton Kershaw also ranks highly.

Now let’s take a look at our trailers:

Extreme ground-ball pitchers rule this list. Notorious sinkerballer Derek Lowe trails everyone in terms of regressed infield-fly rate, followed by 2011 breakout pitcher Charlie Morton. Romero and Greinke have been excellent this season in terms of strikeouts and walks, but as ground-ball pitchers, they shouldn’t be expected to induce many popups. They remain elite pitchers, though, since these kinds of pitchers can afford to give up a few more hits as they allow fewer homers.