Those numbers represent the slash line for the average major league hitter in 2011.

Those numbers represent the slash line for Ryan Ludwick.

Dive deeper into the numbers and the production of Ludwick boggles the mind.  This year, the average major league hitter is walking 8.2 percent of the time… Ludwick is grabbing a free pass to first 8.1 percent of the time. The average hitter whiffs in 20.5 percent of his plate appearances… Ludwick owns a strikeout rate of 21.6 percent. The walks and strikeouts combine to give Ludwick a 0.43 BB/K ratio… just below the league average of 0.45 BB/K.

The law of Ludwick continues… 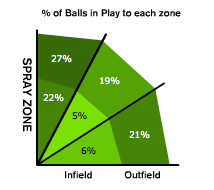 Ludwick is a pull hitter who yanks nearly 50 percent of his balls in play to the left third of the field. Not surprisingly, that’s where his power comes, with nine of his ten home runs flying over the left field fence. According to ESPN Hit Tracker, here are how his home runs break down: It’s not spectacular power, but it’s power you can trust. PECOTA projects another 10 home runs for him for the rest of the season. Given the number of games remaining, that sounds about right.

One area where Ludwick has excelled and outpaced the league average is in the RBI department. The average major leaguer with 351 plate appearances has collected 36 runs batted in. Ludwick, at this point in the season, has delivered fantasy owners 54 RBI. He’s plating just over 18 percent of all base runners, which places him well above the league average in that category (15 percent).  For the season, he’s driving home a run once every 5.8 at bats. Since he moved into the cleanup spot (and behind the hot hitting Chase Headley), Ludwick has been averaging an RBI every 6.1 at bats. Not what we would have thought, but it does point to his consistent production this year with men on base.

If we went ahead and examined the fact that offense is down for the third year in a row and that Ludwick plies his trade in San Diego–a park notorious for suppressing offense–perhaps we could come to the conclusion that Ludwick is actually having a pretty decent season. However, since fantasy leagues don’t use park factors and are immune to the year-to-year fluctuations of offensive output (at least after the draft where some will inevitably buy into an outlying performance), it doesn’t matter that Ludwick is doing well for himself, given the circumstances. All that matters in the end are the stats we’re using for our league.

And those stats say that there is no more average player this year than Ryan Ludwick.

While it may seem I’m condemning Ludwick for being league average, there is something to be said for the average player in fantasy baseball. There is a luxury in knowing you can place a batter in your lineup and not have to worry too much about any one category*. You know with Ludwick that he’s not going to hurt you in the batting average and power categories.

*This ignores the fact that Ludwick is decidedly below average in the stolen base department. He has 17 career steals and has been caught stealing 17 times.

After his 2008 season, Ludwick’s numbers went into a steep decline. Or, maybe, 2008 (where he hit .299 with 37 home runs and 113 RBI and posted career highs in every offensive category) is actually the outlier. Since that season, Ludwick has posted a .256 batting average while averaging 16 home runs and 73 RBI, which is probably close to what we can expect him to pace the rest of the way.  He’s no star, but that kind of production is not too shabby.

You need to be logged in to comment. Login or Subscribe
shmikdog
just haver to say i found this article very entertaining, despite its focus on 'average-ness'. kudos.
Reply to shmikdog