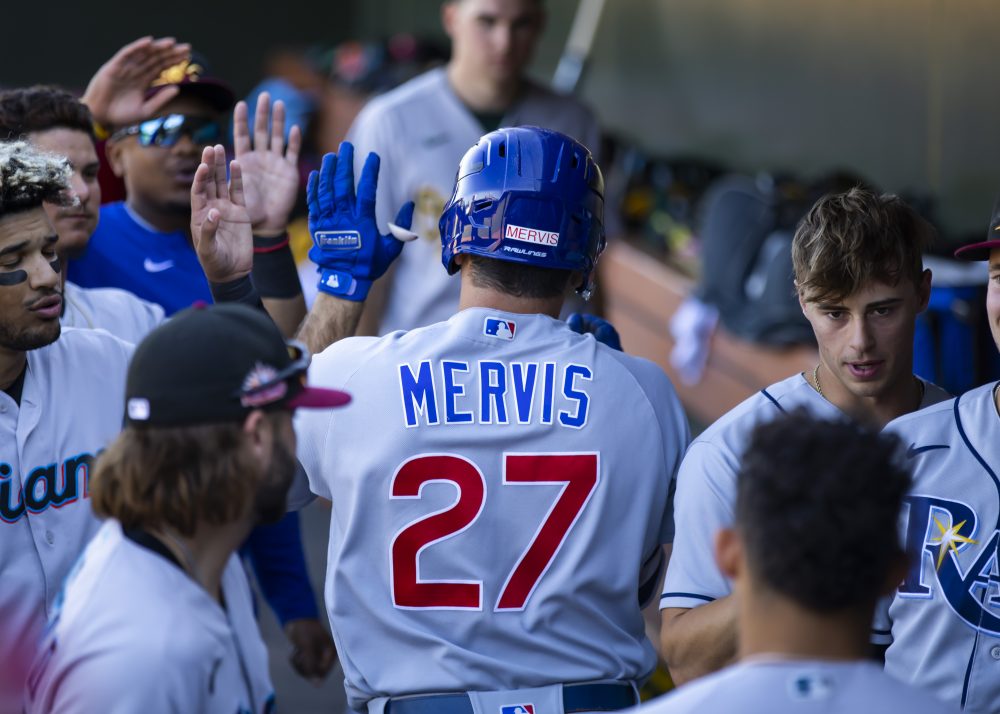 Welcome to the Minor League Update. Every day, we tell you the latest about what happened to the prospects you care about, and maybe a few more you should. Here’s who made waves this weekend:

Hitter of the Weekend

Matt Mervis, 1B, Cubs (AFL-Mesa): 3-7, 2 HR, BB, SB.
The home run leader for the Arizona Fall League not only extended his lead on Friday, but showed up during Sunday’s Fall Stars Game, too. The 24-year-old lefty swinger went yard—as he’s made a habit of doing all year. Though he was an undrafted free agent out of Duke in 2020, the Mike Ford path remains viable for Mervis: He tore up Triple-A Iowa last year, with 36 homers across three levels and a newfound (relative) stinginess in terms of strikeouts. He should see Wrigley next season in some capacity.

Pitcher of the Weekend:

J.T. Ginn, RHP, Athletics (AFL-Mesa): 4 IP, 4 H, 1 R/ER, 0 BB, 2 K.
Ginn has looked good all fall, and rightly earned the nod here with a solid outing Friday. That said, he also had one of the two outings in the AFL over three innings all weekend, so the pickings are slim. Still, the person who relieved him allowed 10 runs in two innings subsequently, so an extra tip of the cap to Ginn for holding the Peoria Javelinas in check.

Due to merely Arizona Fall League three games each day at most, single-day performances from Friday, Saturday, and Sunday are included as one below. This weekend featured no AFL games Saturday and just the Fall Stars Game Sunday, hence the shorter list.

Jonah Dipoto, RHP, Royals (AFL-Surprise): 1 IP, 1 H, 0 R/ER, 0 BB, 0 K.
Already 26, he’s a longshot as a reliever with who misses bats but misses the zone almost as often. The son of former big leaguer and longtime Seattle Mariners head honcho Jerry Dipoto, Jonah is nonetheless still on the radar if he can retain the whiffs while inching closer to the zone.

Spencer Packard, OF, Mariners (AFL-Peoria): 2-2, 2B, 2 BB.
Say that line five times fast! Packard is an older hopeful slugger with limited utility in the field, but he starred at High-A all season nonetheless.

Tyler Hardman, 3B/1B, Yankees (AFL-Mesa): 2-5, 2 HR.
Hardman’s power is what got him selected in the 5th round of the 2021 draft as a senior sign, though his defensive home is an extreme uncertainty.

Brayan Rocchio, SS/2B, Guardians (LVBP-La Guaira): 1-3, 2B.
With the AFL off Saturday, Rocchio and other winter league players get a bit more spotlight. One of the top prospects in the Venezuelan Winter League this year continues to shine against veteran competition.

Maikel Garcia, SS, Royals (LVBP-La Guaira): 1-3, HR, BB, K.
Rocchio’s teammate with the Tiburones has also been shining for La Guaria. The stellar defensive prospect has flashed with the bat this fall.

Heston Kjerstad, OF, Orioles (AFL-Scottsdale): 3-4, 2B, 3B.
Kjerstad displayed his power throughout the weekend, as the former college slugger was runner-up in the AFL home run derby Saturday, falling just one homer shy of Mariners’ 1B Robert Perez Jr.’s total of 32.