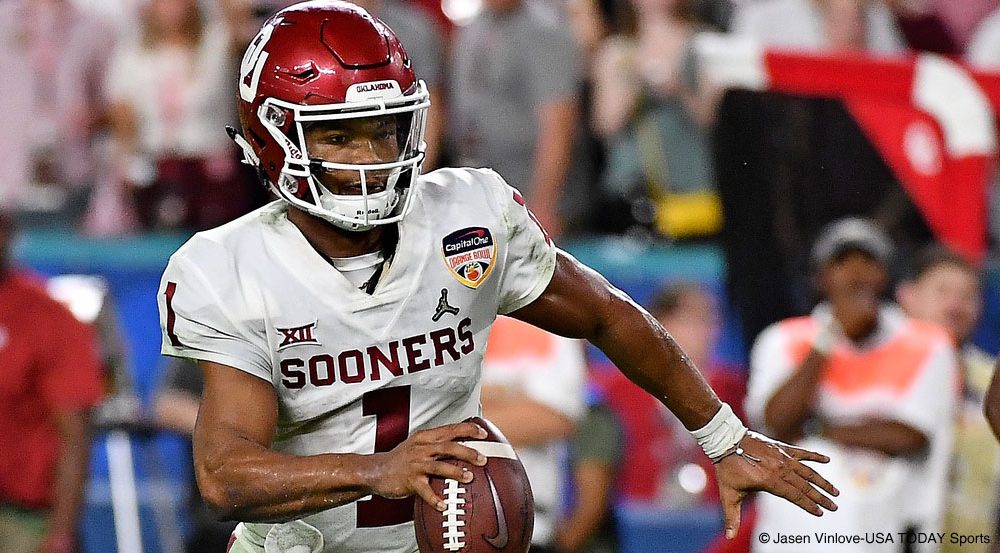 Kyler Murray is an incredibly talented and special athlete, one of those who could probably become a professional at any sport he put his mind to – baseball, football, soccer, downhill skiing. Being from Texas, he chose the first two, and now, at age 21, he’s functionally being asked to pick one.

Say “two-sport athlete” and the first image to come to mind will be Bo Jackson, at the height of his powers, a truly transcendent competitor in the era of carpet-over-concrete in both baseball and football. Jackson was arguably the last truly successful two-sport athlete, alongside contemporary Deion Sanders. It wasn’t that baseball legislated out two-sport athletes (though teams certainly discouraged it), but that those who attempted to come after didn’t have quite the level of stardom.

What about the others, though? Jackson wasn’t the last to try to balance two seemingly diametrically opposed worlds – there have been attempts as recent as Bradley Marquez, who played professionally in the New York Mets’ system while also catching passes from Baker Mayfield at Texas Tech, then decided to end his baseball career before his senior season to focus on football. Most of these doubly-talented players, though, don’t look at attempting to compete professionally in both sports simultaneously. While there have been a number of athletes who did do both in college (Chad Hutchinson, for example, made the majors after picking baseball out of college, then made a career for himself in the NFL), despite the occasional noise about someone doing both, almost everyone focuses on one at a time.

At this point, Murray has made it fairly clear that football is his preferred sport, though the Oakland A’s and MLB made a last-ditch attempt to sell him on riding buses for four years and fighting his team for a pay raise after four more. History supports his decision to pick one sport and stick with it, too.

Perhaps this is because of the professional sports, baseball tends to require the most time between draft and major league debut. While there’s debate as to the efficiency of this path, it takes longer, on average, for a professional baseball player to reach the top level of their sport than an NFL player or an NBA player. (The NHL, which has the most complicated drafting system of any North American league, is difficult to include, what with drafted players continuing in college and the draft pulling players from international leagues.) Prospects who miss time with injury tend to show that time missed, as repetitions are a huge part of either building a consistent arm or bat.

While the development path is much shorter in the NFL, there is still work that happens between college and week one. There’s film to study, and playbooks to learn, and a new team to become accustomed to – something that would be understandably difficult if the new QB is off in Wisconsin riding a charter bus with a bunch of baseball players. Additionally, while there’s still debate on why exactly catchers lag behind offensively, one could extrapolate a similar effect on a raw outfielder working to not just learn one sport, but perfect a second.

As a baseball prospect, Murray is talented but raw. He’s the kind of lottery ticket player that sometimes turns into the next superstar, but sometimes washes out after three seasons in Double-A ball, having never managed to turn the bat speed and strength into hitting ability. In that regard, he’s similar to other outfielders dotting the bottom of the 101, like Jordyn Adams and Kristian Robinson. While some high-round draft picks are polished enough that they can begin contributing to the major league team sooner rather than later, that’s not likely the case for Murray. He has a high ceiling – if he made the actual most of his talent, he’d be an All-Star – yet it’s also not a sure thing.

It’s not that Murray lacks the ability to be a baseball star. It’s that he has a much higher probability of being a football star sooner – and even if he never becomes Baker Mayfield, he will have still have earned financial security for him and his family beyond his NFL days. Baseball is a much more high-variance sport. We used to love to toss around “There Is No Such Thing As A Pitching Prospect” but in a lot of ways, there is no sure thing in a prospect. Injuries happen, tools don’t coalesce the way they were supposed to, the unending highway and peanut butter grind of the minors takes its toll.

Murray’s decision might be different were he making it before entering college, rather than after it. Chris Weinke and Brandon Weeden both took this route, trying minor league baseball, and then entering college to play football. However, Murray’s NFL star will never be higher than it is now. He won’t be the reigning Heisman Trophy winner in a year, with all the hype and prestige that confers. Even though it’s not likely his physical skills would regress should he take a year or two to play baseball first, he would lose the conferred edge that comes from coming immediately out of college football.

Additionally, there’s the not-insignificant matter of money and living conditions. If Murray is taken with the tenth pick of the NFL draft, he will receive close to $10 million, immediately, with further yearly guaranteed salary on top of that. He will not be expected to make that money last across a time span that could be anywhere from two to four years of making below-minimum-wage salary, but will be able to immediately turn that around into finding an apartment, providing for his parents, or whatever else he wants to spend it on. He’ll also be in one of 32 major cities, all of which are – no matter your opinion of them – more attractive for a twenty-something than Beloit, WI or Stockton, CA.

In all likelihood, the days of the true two-sport athlete at the professional level are likely done, if they were ever really here. Far more likely is it that we were blessed with two absolute incredible athletes in Bo Jackson and Deion Sanders, both of whom happened to play at similar times, and we will not see their likes again. If Kyler Murray were to, for whatever reason, pick baseball, he has the raw talent to be a star – but that possibility is years closer on the gridiron, and the path far more straightforward.

You need to be logged in to comment. Login or Subscribe
Louis Arighi
Thanks for the thoughtful article. I feel lucky to have grown up in the Bo Knows/Neon Deion era, and am sad that it is unlikely to come again (although as an A's fan, I am probably better off not having to cringe every time Kyler Murray takes a snap during football season).
Reply to Louis
Pat Folz
Great article. Whenever the topic of two-sport athletes comes up I feel obligated to mention Brian Jordan, who was a Pro Bowl alternate while also playing minor league baseball, and then of course went on to have an All-Star MLB career; he might've been the second-best two-sport star, after Bo, in terms of level of achievement in both sports.

More germaine to the article and the Murray situation, like Louis I miss the days of real two-sport players, though I get why they're pretty much gone. It's worth noting that none of the two-sport guys were ever really *GREAT* baseball players - Jordan I think was clearly the best, with Bo second by a fair distance - and specifically they were almost to a man undermined by poor place discipline (among position players anyway). While it's not unprecedented for players to develop their batting eye subsequent to joining organized pro ball, it's extremely rare, and generally plate discipline seems to be something that needs to be learned through dedicated practice at a young age. Two (or more) sport guys usually miss that. So you can look at Murray's present skills and hope for a Yoenis Cespedes upside, but because of his inexperience the "Likely OFP" has got to be in the Juan Encarnacion range (4, maybe 5 at his peak), not really someone you want to have paid $10+ million for as an amateur, you know? Whereas Neon Deion obviously was a Hall-of-Famer (and an inner-circle guy at that), and Bo certainly would've been too if he hadn't gotten hurt. If his goal is to be the best Kyler Murray he can be, he probably ought to choose football, just based on historical precedent.

That said, I really hope being spurned by Murray causes quite a bit of soul-searching within MLB. Baseball used to be able to say "with us you get more money up front, more money in the future, and you probably won't get hurt in between," but the first certainly isn't true anymore and the second seems to be becoming questionable as well. I thought when they instituted the draft spending cap that owners were being penny-wise and pound-foolish, blowing their major advantage over other sports in terms of getting the best athletes (and thereby getting great players, thereby getting championships, thereby growing franchise value long-term) in order to save a pittance on the front end. Dumb dumb dumb dumb dumb decision, and those chickens are coming home to roost.
Reply to Pat
Patrick
Echoing your statement about MLB not being able to attract more athletes, I think paying minor league players so little and the pay structure in the majors - minimums for 3 years, arbitration for 3, then free agency - are also hurting the future of the sport. It's short-sighted, but I doubt any of the owners will care unless they suddenly can't sell their teams for as much.
Reply to Patrick