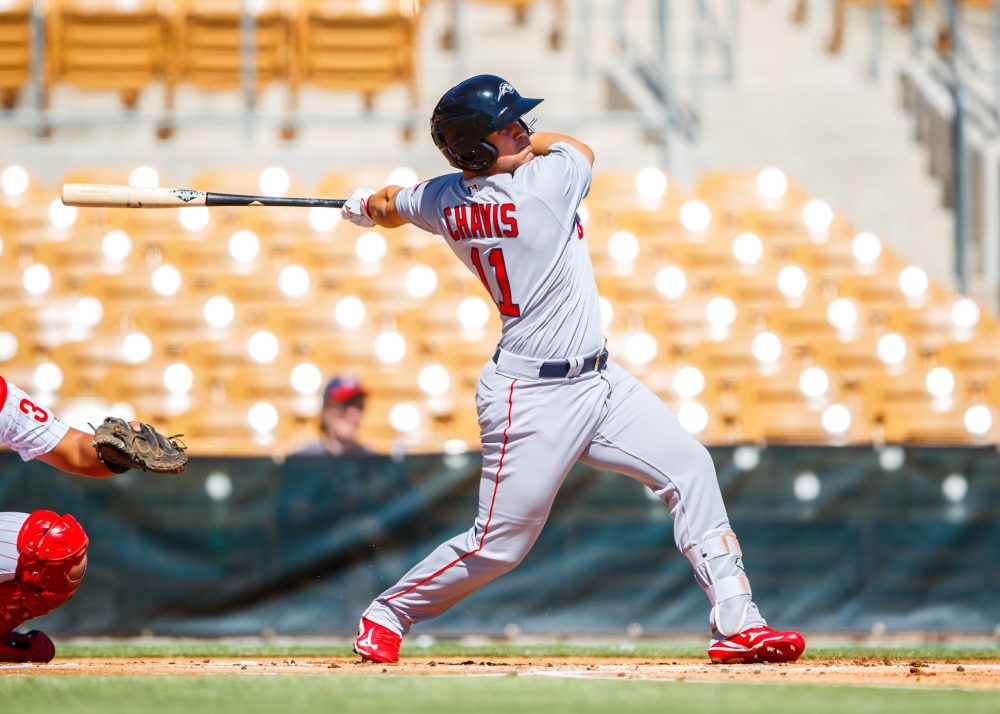 Kirby Bellow, LHP, Diamondbacks (AFL, Salt River): 2 IP, 0 H, 0 R/ER, 0 BB, 3 K.|
A late-round draft pick in 2015 out of Texas, Bellow uses his fringy arsenal well, finding success against left-handed hitters consistently. He struggles to throw strikes at times, but when he has command of his arsenal, he can induce weak contact and miss bats. He lacks significant upside in the bullpen, but Bellow could be a middle reliever or second bullpen lefty.

Josh Morgan, C, Rangers (AFL, Surprise): 4-5, R, HR, 4 RBI.
Getting some experience behind the dish in the AFL, Morgan has a chance to significantly improve his prospect stock. A high-contact hitter with additional on-base ability stemming from his quality approach, Morgan lacks the power to profile at third base, though catcher could be an option to get him to the big leagues.

Kody Eaves, 2B/3B, Tigers (AFL, Mesa): 2-4, R, 2B, HR, 4 RBI.
Vying for a spot on the Tigers 40-man roster this month, Eaves has put together some nice games in the AFL. More of a utility player that could increase his versatility beyond second base and third base, Eaves has some thump in his bat and just needs to make more consistent contact.

Michael Chavis, 1B(?), Red Sox (AFL, Peoria): 3-4, 2 R, 2B, 3B, 2 RBI.
With Rafael Devers entrenched at third base in Boston, Chavis is experimenting at first base to see if he can crack the Red Sox lineup over the next couple of years. Chavis put himself squarely back on the prospect map with a strong showing in High-A and then by holding his own at Double-A in the second half. He needs some additional polish at the plate and in the field, but there’s a chance he could fulfill his original draft promise as a first round pick.

Jorge Mateo, SS, Athletics (DWL, Este): 3-5, R, 2B, RBI, K.
Mateo’s re-emergence in 2017 has been something I have truly enjoyed watching. His prospect stock has vaulted back to the forefront and he once again looks like a player capable of impacting big league games. The Athletics are likely going to give Mateo every chance to stick at shortstop, though there are a considerable number of scouts that believe he can hang in center field, where his offensive profile would also play. Mateo has impact raw tools, including a bit of a power surge this season, and while he had faded from the collective prospect conscious for many, he’s definitely back in a big way.

Luis Torrens, C, Padres (VWL, Magallanes): 3-4, R, 2 RBI, 2 BB.
Torrens is going to be fun to follow over the next couple of seasons. Forced to the big leagues despite just 49 games above the short-season leagues because the Padres popped him in the Rule 5 draft last winter, Torrens has a lot of development remaining. The hope is his development was not stunted by jumping straight to San Diego, and if he can get consistent at-bats in the minor leagues in 2018, he could begin to discover the offensive potential that made him such a highly sought after teenaged prospect.

Tanner Scott, LHP, Orioles (AFL, East Fall Stars): 2 IP, H, 0 R/ER, 0 BB, 4 K.
Scott breezed through Double-A thanks to a mid-90s fastball that has touched 99-100 mph in relief stints in the past, but he continued to walk too many hitters for most scouts’ liking. At his best, Scott can dominate hitters with a power fastball and improving slider, but his control issues and lack of a third pitch will likely land him in the bullpen where he could be a late inning option as he completes his development.