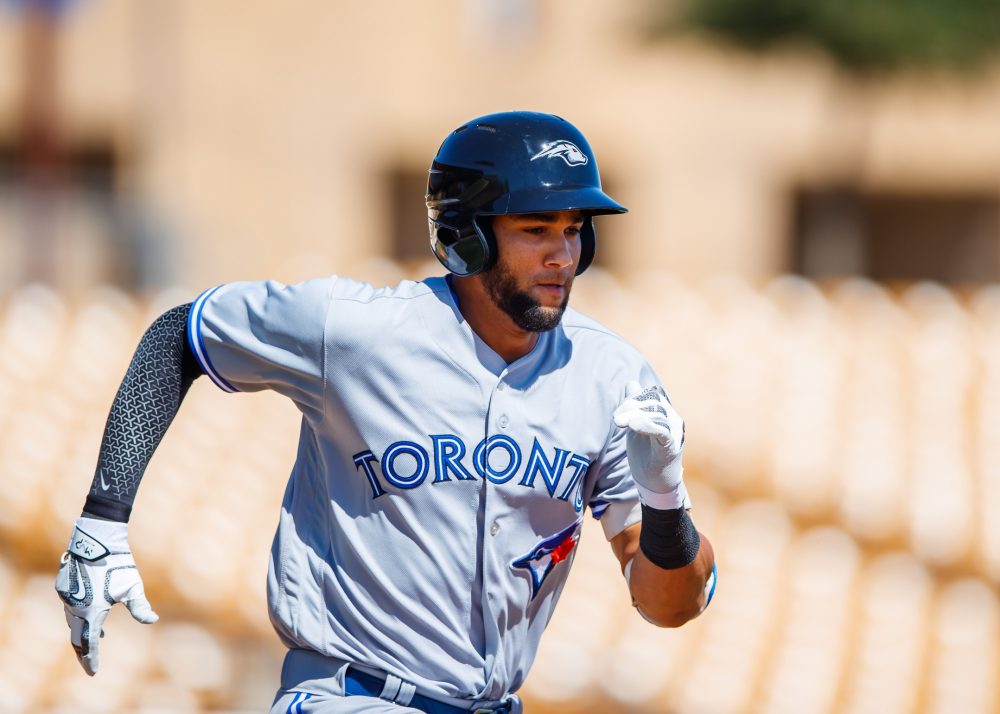 Adrian Houser, RHP, Salt River Rafters (Milwaukee Brewers)
A sturdy righty, Houser is working his way back from Tommy John surgery, pitching only 17 2/3 innings late in 2017. At 6-foot-4, 235 pounds, he has an athletic frame suited well for starting pitching. His delivery is relatively straightforward, and he pitches with minimal effort. In this look, Houser’s fastball has regained its mid-90s velocity, sitting 94-96 (t97) and, not surprisingly, the command is still on the way back. The pitch runs a bit, but it is not a bat-misser, because the ball is relatively easy to pick up out of his hand. His 81-83 mph curve is his best secondary, with 10-5 shape and good depth, and he showed some ability to backfoot it to lefties. His best ones drew swing-and-misses down and away, but in the zone, the pitch is unlikely to miss big-league bats, again, because hitters seem to be able to quickly pick the ball up out of his hand. His change was rough; firm in the 86-87 range with little movement, making it very hittable. At this stage, it is positive to see the velocity on his fastball all the way back. Based on this AFL look, he has a ways to go with his change-up and overall command if he is to hit his backend starter upside. More likely, he may get a shot in the pen, hoping to add a little velo and possibly increase whiffs.

Spencer Turnbull, RHP, Mesa Solar Sox (Detroit Tigers)
Turnbull started across from Houser, and showed four pitches in the outing. His 93-95 (t96) mph sinker is hard, but the pitch does not move enough to induce many whiffs, and in this look, his command was inconsistent, opening early and losing the pitch to the arm-side. His best secondary is his slider which ranged from 82-86, and it had better movement and location in the lower velo band. The pitch was inconsistent, but it shows the best chance for Turnbull to develop a bat-misser, and he was able to locate the pitch in the zone when he stayed on top of it. The slider blended with his third pitch, a cutter, late in the outing. The cut piece was 87 and thrown mostly down and away to righties, and rarely did he locate it in the zone. His fourth pitch is a mid-80s change that is below-average, lacking significant movement. Turnbull just turned 25, and he projects as a swingman/spot starter currently based on the current quality of his pitches and inconsistent command.

Keegan Akin, LHP, Salt River Rafters (Baltimore Orioles)
Akin threw two innings in this AFL look, impressing with his fastball-change combo while whiffing five of seven batters—his lone baserunner a walk. The southpaw’s sinking fastball was 92-94 (t95), which is a bit harder than he typically throws as a starter. He gets swings and misses with the pitch by way of its two-plane movement—heavy sink and good run—and he commanded the pitch both arm- and glove-side. Akin paired it with a plus change, thrown with the same arm speed and release as his fastball. His command of the pitch was not as sharp as the fastball, but he still induced some swing and miss with good tumble. Akin has previously thrown a slider but did not show it in this outing. So long as that pitch is at least fringe-average, I like Akin’s chances to remain in the rotation as a backend lefty.

Corey Ray, OF, Salt River Rafters (Milwaukee Brewers)
Ray had a rough summer in High-A Carolina where he did not make much hard contact on the season. He looked a little better at the plate in Mesa than in my summer looks. Most noticeably, he looked much less anxious, keeping his weight back to be less exposed by off-speed pitches. To wit, he drilled a pull-side double into the corner by waiting on a curveball. In addition, it was nice to see a little bit of game power from Ray, who took Adbert Adzolay out oppo just over the left-centerfield wall.

Steven Duggar, OF, Scottsdale Scorpions (San Francisco Giants)
Duggar impressed out of the lead-off spot with a patient, all-fields approach. Duggar was frequently in hitter’s counts, and he has the barrel control to square up the fastballs he saw as a result. He is a line-drive hitter with a mostly level swing from the left side. He has gap power and does well letting the ball travel deep and aiming oppo, as he did on a double off the wall. Nonetheless, the lack of power makes an everyday role unlikely, despite his speed and good reads in center. He’s a plus runner and adept baserunner, stealing two bases off the opposing pitcher (and beating a 1.75 pop from Max Pentecost).

Taylor Sparks, 3B, Scottsdale Scorpions (Cincinnati Reds)
Sparks has power. Like, lots of it (7 raw). After lighting BP up with pull-side bomb after bomb, he followed it up with homers in his first two at-bats, the first a moonshot on a hanger, the second on a first pitch fastball. Sparks fits the profile of a corner bopper, including a host of big cuts out of the zone. His swing has some length and an uppercut bat path which present additional challenges to the hit tool.  It was a limited look, but Sparks showed enough arm for 3B, and his athleticism bodes well for sticking at the position. However, for Sparks it all comes down to more consistently making contact and putting the ball in play.

Lourdes Gurriel, INF, Peoria Javelinas (Toronto Blue Jays)
The lanky Cuban showed hot-and-cold in this look. First the good—there is a decent chance Gurriel arrives in the bigs with five tools that are at least average, with some potential 6s. The ball explodes off the barrel, a result of plus bat speed and a smooth, mostly-level line-drive swing that is geared to the pull side and middle of the field. He adds five raw power, a six arm, and good hands. On the other side of the ledger, Gurriel’s footwork is pushed at SS, and I project a move to third at some point in the near future. In addition, his ability to tap  the power is in question, as he does not engage his lower body when he drives the ball, relying on his bat speed and strong wrists to impact the ball. Without adjustments, his raw power isn’t likely to translate to games. His concentration seemed to waiver, including an egregious mental error in the field. I do not project Gurriel to be a star, but this initial look bodes well for an everyday role on the dirt.