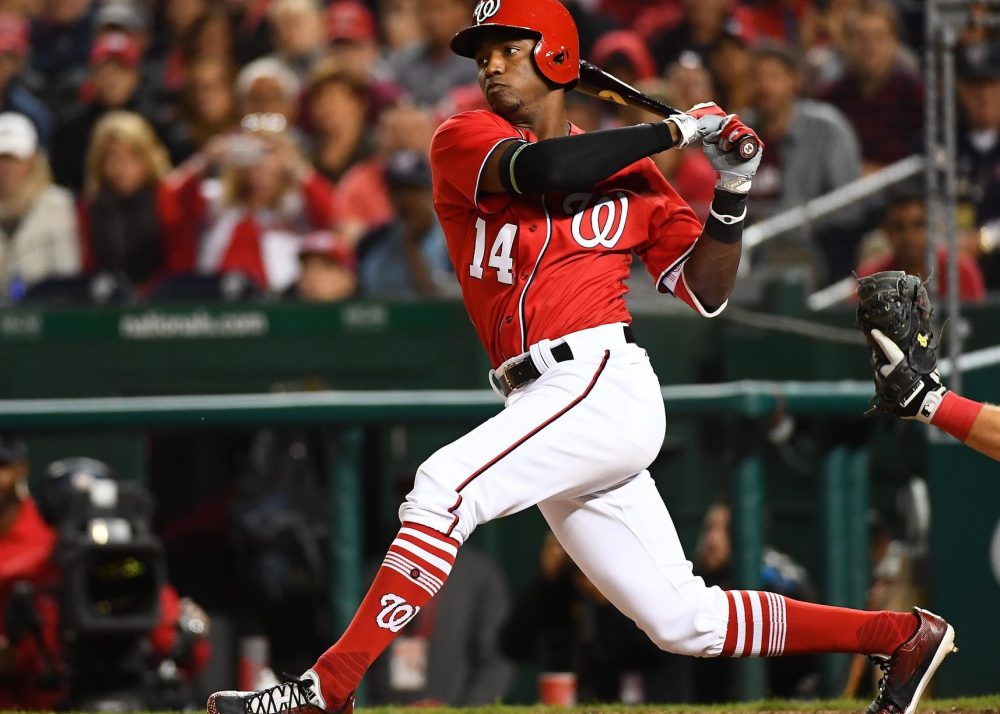 The Situation: The Nationals are 18 games up in the NL East and pretty obviously going to the playoffs, but their outfield situation has been a mish-mash ever since Adam Eaton went down for the season in April. Bryce Harper should be back from his own knee injury for the playoffs, but that’s not even a guarantee. In center, Michael Taylor played unexpectedly well in the first half, but has been awful since his return a month ago from an oblique injury. It’s unwise to count too much on the Howie Kendrick resurrection tour to continue with such aplomb in left, and Jayson Werth is a shell of his former self. Victor Robles is among the best prospects left in the minors, has had success (albeit limited) at Double-A, and can play all three outfield spots, so it’s time to get weird.

Background: A fairly unheralded $225,000 signing out of the Dominican Republic in 2013, Robles started turning heads nearly immediately upon his stateside debut in 2015. After demolishing both the complex-level Gulf Coast League and New York-Penn League to the tune of a combined .352/.445/.507 playing the entire year at just 18, we named Robles the 29th-best prospect in baseball before 2016, one of our highest placements ever for such a young international signee yet to play in full-season baseball. Robles continued the devastation on the Low-A South Atlantic League to start 2016, but had his first professional scuffles at High-A in the second half of the season while battling a hand injury, with lower power numbers leading to a just-okay .741 OPS. Despite the minor troubles, Robles was one of the most sought-after prospects as the Nationals made several major trades last winter, but the Nats refused to move him.

Coming into this season, we ranked Robles as the seventh-best prospect in baseball. He confirmed that ranking and more by resuming the demolishing of baseballs in a return engagement in High-A, and then hit .324 for 37 games at Double-A. We moved him up to the no. 4 prospect in baseball at midseason, in strong consideration for the top overall slot.

Scouting: Robles offers up to four potential 70-grade tools: hit, run, field, and arm. Ironically, given the general vagaries of evaluating the hit tool, the grade projection there probably has the most agreement. More than any other prospect in baseball, essentially everyone agrees that Robles has plus-plus projection to hit for average. He’s like greased lightning in the hands and wrists, his plate coverage and barrel control are both outstanding, his plate discipline is sublime given his age and experience, and there’s even a major OBP-enhancer in his aggressive ability to get plunked with pitches. He’s a clear 70 runner down the line and has been a significant stolen base threat in the minors. He’s the best defender of any top outfield prospect in the minors, utilizing that speed to the max, and his arm is an accurate rocket.

If there’s something that only rates as average here, it’s the power projection, but that might even be underselling it a bit. His extra-base hit production skyrocketed this year, with 55 XBHs in 496 minor-league plate appearances. Robles is on the short side and wiry, so you wouldn’t immediately associate him with a big power upside. But he’s very athletic, and enough athletic players that originally projected for average doubles-heavy power have started smashing home runs in the majors to take notice of the trend. Robles would seem well-suited to be one that outhits the dinger projections.

Immediate Big-League Future: At peak, Robles could be one of the best and most well-rounded players in the game, but he’s coming up with only 137 plate appearances above A-ball. Since Robles did not need to be protected from Rule 5 this winter, the Nationals are giving up an offseason 40-man spot along with a month’s service time to have him up now, so one would think he’s due some type of trial-by-fire to see if he’s ready early. He’s the type of prospect that could adjust immediately and seize the center field job for good in September, or he could be overmatched and be ticketed for limited playing time and a midseason 2018 true ETA, similar to Yoan Moncada over the past year. Even if it’s the latter, Robles’s speed and defense would make him an absolute weapon off the bench in the playoffs. —Jarrett Seidler

Fantasy Impact: Here’s an oversimplification: The 20-year-old possesses the raw talent necessary to evolve into a five-category fantasy monster. Over 496 plate appearances between High-A and Double-A, Robles hit .300/.382/.493 with 55 extra-base hits (10 home runs) and 27 stolen bases in 37 attempts this season. He’s the embodiment of a franchise cornerstone in the modern fantasy landscape, as evidenced by his lofty ranking (No. 4 overall) on Bret Sayre and Ben Carsley’s mid-season dynasty prospects rankings. What truly separates Robles is the combination of superstar-caliber upside juxtaposed by a realistic four-category contributor floor. Even if he fails to develop 20-plus home run pop, his blazing speed and on-base skills provide a rock-solid foundation, which should mitigate the potential batting average and power risk in his profile. From a dynasty perspective, Robles is one of the most attractive long-term assets in the game.

The unknown variable is how much playing time manager Dusty Baker will entrust the precocious center fielder over the remainder of the present campaign. He’s the youngest player in The Show, joining Ozzie Albies as the only major leaguers born in 1997. It may be unrealistic to expect him to garner more than a handful of starts per week down the stretch, which limits his appeal in re-draft formats. However, if he’s given anything close to an everyday opportunity, then Robles will produce enough, especially in the stolen base department to warrant a pickup in mixed leagues. —George Bissell