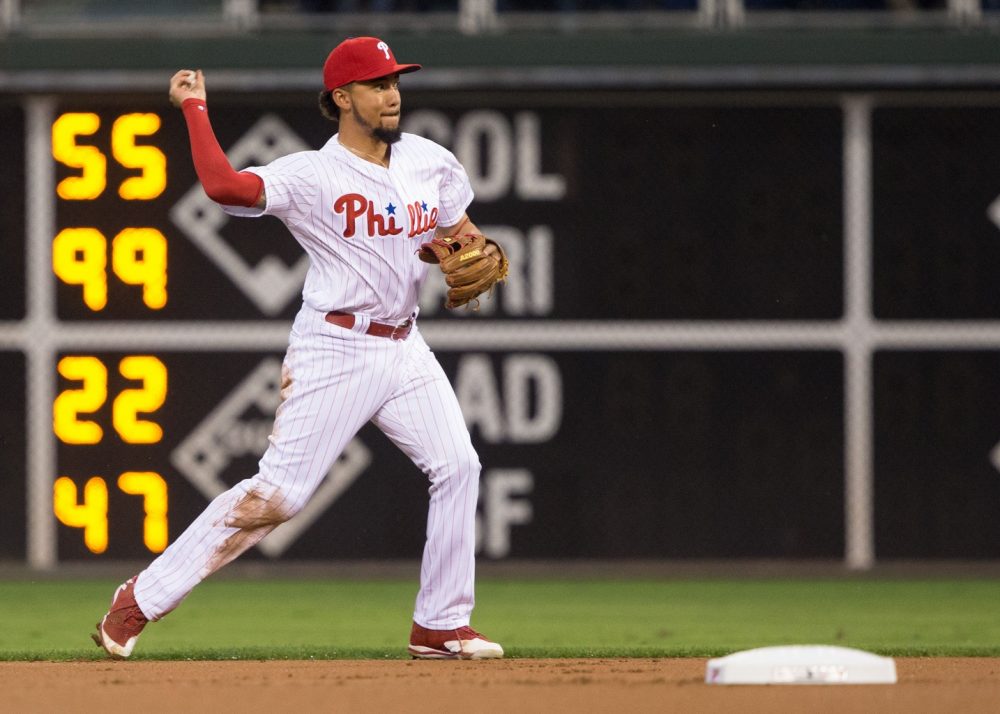 The Situation: Coming off a strong second half at Triple-A Lehigh Valley, the Phillies are recalling longtime top prospect J.P. Crawford. Even though there’s no real need with incumbent shortstop Freddy Galvis continuing to do Freddy Galvis-quality work out there, it’s September and Crawford has to go on the 40-man after the season anyways, so why not?

Background: Crawford was the 16th pick in the 2013 MLB Draft out of a Southern California high school, a few spots after longtime friend and fellow recent call-up Dominic Smith. After dominating the Gulf Coast League post-draft, Crawford reached full-season ball at Low-A Lakewood at 18 years old in his first pro summer, a rare feat for a high school pick. He breezed through A-ball and Double-A, though he never posted the kind of power numbers that went along with the scouting report. Upon reaching Triple-A at midseason 2016, Crawford’s performance tanked, although he battled injuries there and still maintained a strong walk rate. Another dismal first half in 2017 led some to question his future, but Crawford was one of the hottest hitters in the International League over the second half and raised his overall season performance towards acceptability.

Crawford ranked 36th on the BP 101 before the 2015 season, and 4th before the 2016 and 2017 seasons. He dropped to 20th on our midseason list, released around his season’s nadir in the first week of July. He’s ranked as the top prospect in the Phillies system for each of the last three years.

Scouting Report: All the party pieces are present for an on-base machine that plays above-average defense at the six-hole, and that’s still a star even in the days of everyone uppercutting a potentially juiced baseball. Crawford has a silky, fast swing from the left side that still projects as average-to-plus at the major-league level notwithstanding some mediocre batting averages in the high-minors. He pairs that with some of the best plate selectivity in the minors, and the combination could coalesce to post some shiny OBPs during his peak. Defensively, he’s a no-doubt shortstop with smooth, strong actions and more than enough arm for the position; he shouldn’t have any issues at second or third if the Phillies so desire, either.

The two remaining tools here aren’t nothing, either. Crawford has always shown plus raw power in batting practice and occasionally in games. But his hitting approach limited that to mostly projection until the second half of this year, when he hit 12 homers over the last two months of the season. A power breakout still looms as a possibility, and if it comes without sacrificing the on-base skills, look out. He’s an above-average runner down the line but hasn’t been a big stolen base threat in the minors.

Because of his core walk rate and defensive abilities, it always seemed unlikely that Crawford would fail to be a productive MLB player in some form, even during his calendar year of Triple-A struggles. Yet substantial debate has occurred in the prospect community about his upside and the causes for his bad run and subsequent rally, including recovery from knee and groin problems and changes to his swing. Crawford has even acknowledged criticism from prospect writers as a motivating factor. We’ve remained fairly high on Crawford at Baseball Prospectus, and ultimately still project him to be a potential star with a sneakily high floor even if his Triple-A issues recur in The Show.

Immediate Big-League Future: Crawford has played some second and third base over the past few weeks at Triple-A, and he might see scattered time around the infield in September in deference to Galvis, just like Rhys Hoskins has seen much of his time in left in deference to Tommy Joseph. After finally conquering the level after more than 900 plate appearances at Triple-A, it’s time for the Phillies to let Crawford run with the shortstop job already, whether that means moving Galvis to another position or another team this offseason. —Jarrett Seidler

Fantasy Impact: You won’t find a dynasty league prospect who’s had more ups and downs than Crawford. Heading into the 2016 season, he was a legit contender for top overall dynasty league prospect in the game, ultimately coming in at No. 4 on our list. But his stock had taken a big enough hit that he ranked down at No. 23 on our 2017 midseason update. The thinking was that while Crawford still had all the tools, we weren’t sure he could use most of the important ones in games.

Two months later we still don’t really know if he can, but the odds look better, at least. Once viewed as a five-tool prospect, Crawford’s natural speed has never translated to baserunning prowess. He’s just 12-for-20 in steal attempts in more than 800 plate appearances, and his lower minors numbers weren’t great either. Couple that shortcoming with Crawford’s poor batting averages and lack of usable game power, and you can understand why dynasty league owners were getting skeptical. But Crawford has assuaged some fears by hitting 15 homers in Triple-A this season and by reaching base at a high clip in the second half. It gives us hope that maybe Crawford can hit for some average and power from the shortstop position, and hey, maybe he’ll get good enough on the bases to swipe 10 bags a year, too.

Crawford isn’t going to help you much this season. His second-half surge in Triple-A aside, there’s not a lot that suggests he’s going to hit the ground running in the majors. If he starts next year in Philadelphia, he’d be worth a flier in deeper mixed leagues, but nothing more as of yet. Crawford is still very young (22) and raw enough at the plate that I think his fantasy impact ETA is probably closer to 2019 or 2020, even if his real ETA is now and early/mid 2018. —Ben Carsley

You need to be logged in to comment. Login or Subscribe
ironcityguys
The timing of the promotion seems odd as Lehigh Valley just secured the wild card berth in the IL playoffs yesterday. Is this just a case of letting Crawford get a taste of the big leagues to see if it will boost his game to new heights after some serious question marks at AAA (a la Nick Williams and Rhys Hoskins)? Would making a run at the Governor's Cup instill a winning attitude that might overshadow a few weeks of big league time?
Reply to ironcityguys