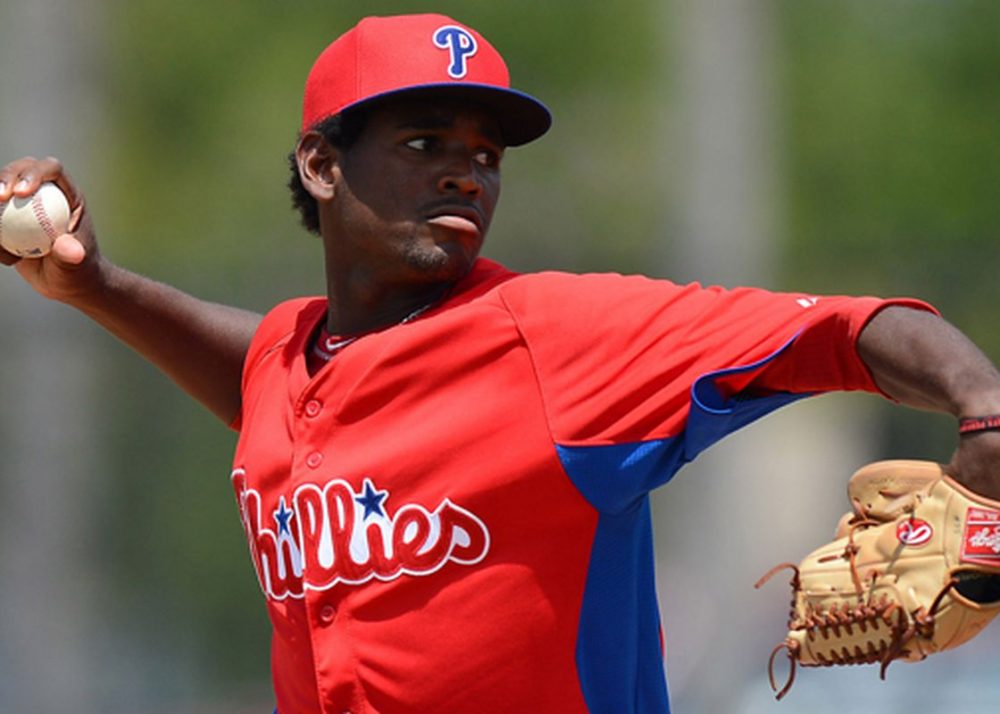 “Sixto Sanchez was on various drafts of our 2017 Top 101” may end up the epitaph on my tombstone. I think he finally ended up getting bumped by Walker Buehler, and hey, that doesn’t look so bad right now. Still, Sixtoi not being on the list looks…less good. It’s easy to handwave the strong GCL reports as (1) it’s the GCL, and (2) he was a short righty with a big fastball but not a ton else. Well, he still a short righty, but this isn’t the GCL, and there’s…a lot…else…now. The fastball is still big. He touched 100 for me, hit 99 a few times, and the four-seamer sat 96-98 deep into his outing. He also will cut it at 94-97, running it in on lefties, and there’s a two-seamer at 92-95 with good sink and run that can shatter lumber. He threw all three for strikes and showed present above-average command. Sixto manipulates his breaking ball similarly. It ranged from 77-86 mph. The upper-70s version was used to spot for a strike. The lower-80s one showed late, hard 11-5 action. The mid-80s version functioned more like a slider with late depth. He’d throw it in any count, and ripped off his best one of the day as a patently unfair 3-2 wipe out pitch. It’s a potential plus-plus offering. There’s two distinct versions of the change—we are verging on leitmotiv now—A harder one around 90 with split action, and a more traditional circle type in the mid-80s. The Kannapolis charters suspected it was the same grip for both, with the split version just thrown harder. I preferred the split, although he threw it sparingly, but the regular version would give him a fourth (or seventh?) average or better offering.

Sixto is still short, and his three-quarters slot means he is never gonna get a ton of plane on his stuff, but there’s little else to quibble with in his mechanics. He is a premium athlete with a simple, slightly uphill delivery. One of the advantages of being a shorter pitcher is everything is more compact, and he repeats well. He generates his velocity with less effort than you think, just a bit of torque and a wicked fast arm. His pitchability is precocious. He’ll shift to the two-seam with runners on base to try and get ground balls. He manipulates all three pitches—which can function as seven different offerings—and is confident to throw any of his secondaries in any count. And oh yeah, he doesn’t turn 19 for a couple more months. Sixto may be short, but so is the list of pitching prospects in baseball I’d take over him right now.

To make our theme even more transparent, I might be able to find six.

I think Sixto ended up getting bumped off the 101 by Walker Buehler, but it is entirely possible that on one of those bleary-eyed midnight conference calls to finalize the list that it was actually Alec Hansen who took his spot. Alec Hansen is a very good pitching prospect. I know this because I saw him pitching opposite Sixto. Hansen’s exactly the type of OFP 60, no. 3 starter type that I bemoan having to find new ways to describe every year in the Annual. There’s a plus fastball, a potential plus curve, questions about the command and change, etcii. Jarrett covered Hansen in-depth last week, so I don’t mean to duplicate work here. But what stood out to me is just how clearly Hansen was the second best pitcher in this game. Putting him in the Top 101 was a bit of a gamble, given how divergent the 2016 reports were, but he looked exactly the part of the 97th best prospect in baseball or thereabouts—a reason to go to the ballpark in and of itself. Still, I found myself agitating for quick innings—which he was more than capable of providing against an A-ball lineup—just to get Sixto back on the mound again. That’s not a particularly scouty definition of an OFP 70, but…iii

4. A Beethoven symphony, played at the later marked tempos

6. Any seven-minute sequence from one of the better Michael Haneke films

4: a reduction to six pitches

1. A 91 mph split-change to end the first inning (Sixto spent most of the first inning establishing the fastball. That is pretty commonplace at this level. He also works incredibly quickly, hence the Beethoven compv. So there is a pop-pop-pop to the proceedings. He touched 99 in the first and the fastball made a heckuva first impression on its own. Then he punctuated the frame with that split. It was at that point you started to reckon with what you were really looking at on the mound.)

2. A 94 mph two-seam fastball under the hands for a strikeout (You will see bad swings at this level on all varieties of offerings, good, bad, and indifferent. Some of the worst swings I ever saw in the South Atlantic League were off Dario Alvarez‘s fringy slider. So it’s not necessarily the best way to judge the stuff of the pitcher. This swing wasn’t all that bad, because the hitter didn’t realize the pitch was going to end under his hands until it was far too late to even flimsily adjust. We talk about pitches being “unfair at this level.” This would have been unfair at most levels.)

4, 5. A 78 mph curve and a 85 mph change (I don’t want this piece to read as pure puffery. I do think Sixto is one of the better pitching prospects in baseball, but he is also 18 and in A-ball and there are things to work on. Jarrett noted the first time he saw him that he appeared to be throwing a bit of everything, perhaps to figure out what worked for him. And as I wrote earlier, you could categorize his repertoire in this look into seven different pitches if you were so inclined. The slower curve and the more traditional change are the works in progress here. If you can cast a change, Sixto will do it at times, and the pitch can lack tumble despite the large velo separation. It’s the kind of offering that will get A-ball hitters out, but won’t fool higher level bats. The harder breaker and split-change are sharper and better allow him to maintain his lightning arm speed.)

6. The pitch he didn’t throw to start the sixth inning (Sixto got lifted after five innings and 58 pitches. He has yet to pitch into the sixth or throw more than 80 pitches in a start this season. The Phillies have given him extra days and even skipped him on occasion. At the time of reporting, they’ve paper moved him to Williamsport and TBD’d his scheduled Saturday start. He is 18, and you are going to manage his innings this way. There’s a target to hit here—maybe 20 starts and 100 IP—but it does inject more uncertainty into the profile. If we had perfect knowledge that he could handle a starter’s workload, he’d be one of the best prospects in baseball. We don’t, because he is also a pitcher.)

Six years from now Sixto will be 24, roughly the age by which we expect good prospects to be good major leaguers. Six years ago we would have said similarly glowing things about Arodys Vizcaino, Jenrry Mejia, and Manny Banuelos. Demography isn’t destiny in the prospect world. So there is always the risk this will get shame-peached to me in 2023 if for some reason I am still in this Sisyphean gig, but we were always headed to this point. There is always one final reference in the coda.

i I have discussed this topic before, but every style guide I know of would concur that after using his full name at the outset, subsequent mentions within the piece would call him “Sanchez” (or Mr. Sanchez if you are the Times). Sure, but his name is Sixto.

iv This is a dangerous comp and not actually one I came up with myself. I will not out the source.

vi I am disappointed we didn’t come up with some crazy faux-futuristic BP logo hats or something like that.

You need to be logged in to comment. Login or Subscribe
sclem21
Enjoyable
Reply to sclem21
jmistretta
Great piece, thank you. I was very disappointed to not see Sixto in the 101 but this more than makes up for that!
Reply to jmistretta
jfranco77
Very enjoyable piece. Which of these things would we NOT have said about Anderson Espinoza last year?
Reply to jfranco77