Jon Singleton signed a long-term contract with the Astros before he’d even played a major-league game, inking a five-year, $10 million deal one day ahead of his June 3, 2014 debut. At the time Singleton was a 22-year-old consensus top prospect, cracking both the Baseball Prospectus and Baseball America top-100 lists in four consecutive seasons. Other prominent prospects—including Astros organization-mate George Springer—had turned down similar pre-debut offers, and some critics believed that Singleton was signing away his future too cheaply. 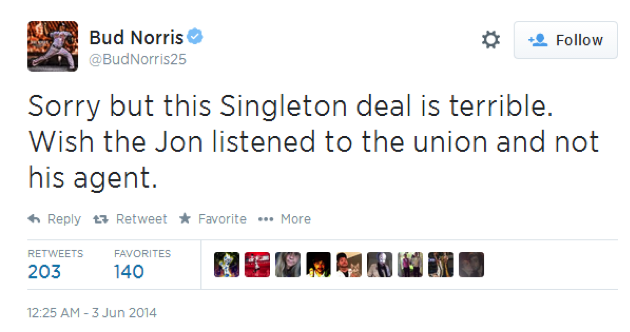 Whether or not it was a sound decision for the Singleton of mid-2014 to trade as many as eight seasons of team control for a guaranteed $10 million payday at age 22 is still debatable, although perhaps not for the reasons Norris was worked up about back then. What’s not debatable, two-and-a-half seasons later, is that things have gone about as poorly for Singleton as possible. He hit .168 in his 95-game debut, hit .191 in 19 games in 2015, and didn’t see the majors at all in 2016. He’s still just 25, but Singleton was dropped from the 40-man roster, passed through waivers unclaimed, and is currently at Double-A.

He’s so far out of the Astros' plans that general manager Jeff Luhnow explained the decision to send him to Double-A by saying that it’s “simply a matter of at-bats … it was just going to be hard to get everybody playing time at Fresno without making a couple moves like that.” In other words, the Astros don’t want him taking playing time from Triple-A prospects they actually have some hope for. Here’s what Singleton told the Corpus Christi Caller-Times about returning to the Double-A Corpus Christi Hooks, for whom he was the team MVP as a 20-year-old in 2012:

Obviously, over the years I’ve worked my way to the higher levels, to the big leagues and whatnot. It’s a disappointment to come back to Double-A. But there’s obviously things I need to work on, just being more consistent as an everyday player. It’s definitely frustrating. It’s just something you just kind of have to face, just tackle. You’ve got to take it day by day, beat the day pretty much; be productive and make progress, make strides.

It’s impossible to say for certain if things would have played out the same for him in an alternate universe where he’d passed up the long-term contract, but in this universe Singleton would have earned less than $1 million in the majors if not for the pre-debut deal. This season alone he’s being paid $2 million to play at Double-A, where he was demoted because he hit just .202/.337/.390 at Triple-A last season (while also being paid $2 million). Singleton surely isn’t happy with how his career has gone, but signing that contract in mid-2014 will likely earn him an extra $9 million. I’ll bet his grandkids appreciate that some day.

For contracts like Singleton’s, in which an inexperienced-but-promising player accepts much less than his maximum future earning potential in exchange for a much higher guaranteed amount, there are basically three ways it can go. At one extreme is the prospect becoming a star and providing value far beyond his salary, in which case the team is thrilled. Evan Longoria signed a six-year, $17.5 million contract with the Rays one week after his debut in 2008, immediately established himself as one of the best third basemen in baseball, and provided Tampa Bay with the kind of crazy value that enabled winning with low payrolls.

In the middle is the prospect topping out as a useful role player, in which case the team still probably gets somewhat more value than it paid for. And at the other extreme is a Singleton-like worst-case scenario, in which the player benefits by pocketing, say, $10 million for 114 awful games. Singleton isn’t alone, so I’m not trying to just pick on him. For instance, Jose Tabata signed a similar six-year, $15 million contract with the Pirates two months into his debut season and was finished as a regular by age 24. This season, two years removed from his last big-league action, Tabata received a $250,000 buyout.

But here’s the thing: There isn’t really a worst-case scenario for the team. Sure, the Astros have been hurt by Singleton’s lack of development and would gladly take a mulligan on the deal, but realistically having to pay him $2 million per season to play in the minors has zero impact on their plans. Singleton would be the 17th-highest paid player on Houston’s roster this season, sandwiched between middle reliever Will Harris at $2.2 million and backup outfielder Jake Marisnick at $1.1 million. Singleton is a drop in the bucket for a team with a $125 million payroll.

Think of sitting at a poker table, realizing the odds are stacked in your favor, and loosening your starting range. Instead of waiting for pocket pairs and ace-king, splash around with suited connectors because losses in small pots will easily be canceled out by wins in big pots. If teams were to loosen their starting range for pre-arbitration contracts—adding prospects and recent debuts to the usual mix of players with 1-3 years of service time—nearly every team would have multiple candidates. Connecting once pays for itself and a handful of others. Connecting more than once sets teams up for a decade of success.

In a way, the Singleton contract going as poorly as possible makes me think that teams should actually be even more aggressive signing players with little or no service time to long-term contracts. St. Louis should see if Alex Reyes wants $15 million in security while he’s rehabbing from Tommy John surgery. Minnesota ought to approach Byron Buxton while he’s hitting below .100 and see if he’ll sign away options to his first few seasons of free agency for less than Joe Mauer makes in 2017. After all, Houston signing Singleton couldn’t have gone worse and the negative effect on the Astros is nearly nonexistent.

Teams signing pre-arbitration players to long-term contracts is nothing new. John Hart and the Indians did it repeatedly and with tremendous success in the 1990s, and just last week the Cardinals signed Stephen Piscotty to a six-year, $33.5 million contract after one full season in the majors. The arbitration process is designed to increase salaries constantly, so teams crave cost certainty, but the big motivation is the ability to delay free agency. It won’t matter for Singleton, but imagine if teams had been able to cheaply secure 1-3 years of free agency from other mid-2014 debuts like Mookie Betts, Jacob deGrom, and Springer.

If, say, Betts had signed a Singleton-style contract with Boston in mid-2014, the Red Sox would likely be looking at a total savings of around $50 million along with the ability to delay his free agency from 2021 to 2022. Tabata’s deal with the Pirates included team options for his first three free agent seasons, so if the Red Sox had signed Betts to that type of deal their total savings could surpass $100 million and they’d be able to breathe easy regarding his free agency until 2024. For teams, the risk is very small and the payoff is potentially massive, both in terms of money and player retention.

MLB’s service-time system gives teams six years of pre-free agency control and all of the leverage, allowing them to repeatedly apply pressure to players who have just one bet to make on themselves. Until that changes, there’s a sweet spot where the guaranteed money can change a life—and the lives of a family for generations—while barely appearing on a billion-dollar organization's radar. Given rapidly growing revenue, the current sweet spot is probably between $5 million and $50 million. That’s a large enough zone for all kinds of players to be included, all kinds of lives to be changed, and all kinds of teams to brush off the worst-case scenarios.

You need to be logged in to comment. Login or Subscribe
Grasul
This ad box that keeps making you scroll back to the top of the page makes the article unreadable. I get you guys need to make a living, but please stick to ads that let us actually read the content on the page.
Reply to Grasul
NYYanks826
Agreed, it is very frustrating trying to read an article, and then having the paragraph you're reading suddenly fall to the bottom of the page because a video ad pops up right in the middle of the page that ALSO slows down your computer significantly.
Reply to NYYanks826
kathywoolner
Customer Service is available to help you (CS@baseballprospectus.com). We will contact you for more details so we can resolve this. Thank you for your feedback!
Reply to kathywoolner
Grasul
Thanks for following up.
Reply to Grasul
lmarighi
Appreciate your take, Aaron, but one thing you didn't mention that I have seen elsewhere is the bonus issue. For players who did not get significant bonuses (perhaps those under $1 million, although that's just a guess at the tipping point), signing away a bunch of years for a guaranteed $10/15/20 million dollars can be irresistible. However, if you were a high-level draft pick and made $4 million already as a bonus, you might be more willing to bet on yourself, and forgo that guarantee. So I think the list of players would be willing to take those kind of deals is more limited than was perhaps implied.
Reply to lmarighi