Welcome back! It’s been a few turbulent months, but BP's Free Agent Watch has finally returned. I’m warning you right now: We’re going to have a brand-new, fresh look this season. Unfortunately, I’m still not quite sure what, exactly, that looks like. For now, we’re going to remain in beta mode, just to tweak the look and feel of the piece. However, our focus remains the same: identify the premium free-agent targets left on the market. This column will focus primarily on players relevant to 12- and 15-team mixed leagues. If you’re looking for an even deeper dive into the free-agent pool, my esteemed colleague Scooter Hotz has you covered every Wednesday with his Deep League Report. Finally, don’t forget about The Stash List produced by Greg Wellemeyer every Thursday. It’s your one-stop resource for the top prospects, closers-in-waiting and speculative pickups worthy of a roster spot, regardless of fantasy format.

As a brief reminder, the Free Agent Watch does not include:

Without further delay, let’s dive into the Week 1 edition.

The Mayor of Ding Dong City wasted no time endearing himself to the Milwaukee faithful by taking a sledgehammer to the Rockies pitching staff earlier this week. Not only has he cemented his status as an everyday player, but also it appears that he will be a mainstay in the heart of the order. There are some lingering questions regarding his ability to hit left-handed pitching, which could ultimately sap his playing time, and limit his overall fantasy ceiling. However, he’s relocated to a fantastic home park, and clearly deserves to be owned as a three-category, corner infield option in standard mixed leagues. The incredible depth at the position and playing time concerns were his lone detractors coming into the year, but if he’s going to continue to receive full-time at-bats vs. right-handed pitching, he should remain a viable starter in a mixer.

Given the dearth of stolen-base specialists in the fantasy landscape, it’s somewhat mystifying that the 25-year-old remains this widely available. He’s solidified his status as an everyday player, splitting time between shortstop and the outfield, and was one of just 28 players to steal 20-plus bases last year. There’s very limited power potential, but the multi-position versatility and speed make him a legitimate mixed league asset moving forward.

The 33-year-old southpaw opens the 2017 campaign with a tasty matchup against the left-handed heavy Tampa Bay Rays lineup. I’ve spilled plenty of ink on the electronic pages of BP touting Liriano as a viable back-end fantasy starter this offseason. You shouldn’t need me to sell you on him at this point. If for some reason he’s available, you know what to do.

The 24-year-old right-hander spun seven sterling innings against Toronto, allowing just one run on four hits with eight strikeouts in his 2017 debut. His stuff looked incredible, especially the curveball.

The raw physical talent has never been in question with Bundy. We saw flashes of brilliance a year ago. The major concerns in his profile center more on his long-term health and immediate workload. I’d be hesitant to confidently project anything more than 150 innings, but he needs to be owned in fantasy leagues moving forward. He takes the ball again Tuesday night in Fenway Park. It’s another brutal matchup, but given the way he’s pitching, it might not be a bad idea to roll the dice.

I’m not entirely sold on DeShields garnering enough regular playing time in left field (barring injury) to make a substantial fantasy impact this season. The constant presence of Jurickson Profar, Ryan Rua (and potentially Joey Gallo) has turned the Rangers left-field situation into a legitimate quagmire moving forward. To DeShields' credit, he did put together an impressive performance in spring training, can fill-in at center field, and has the raw talent necessary to make an impact in the stolen-base department when if the opportunity presents itself. The 24-year-old is still out there in the vast majority of leagues and has enough stolen base upside (25 steals in 121 games in 2015) to warrant a roster spot for the immediate future.

In one of the more surprising developments of the spring, Toles not only won the starting job in left field, but he also ascended to the leadoff spot versus right-handed pitching for Los Angeles. This could be a temporary situation, but the 24-year-old slashed an impressive .326/.382/.511 in 102 plate appearances against righties last year. If Toles sticks permanently atop the Dodgers lineup, he could be in line to score 80-plus runs this season. The time to invest is right now, especially in leagues that allow for daily lineup changes.

The hot corner is raging with talent right now, but that shouldn’t deter fantasy owners in deeper formats from plucking Freese out of the free-agent pool. With Jung-Ho Kang out of the picture for the immediate future, the 33-year-old veteran should be in line for everyday at-bats in the Steel City, making him a viable option in deeper mixed leagues. Freese doesn’t possess tantalizing fantasy upside, but there is legitimate value in his consistency and guaranteed playing time. 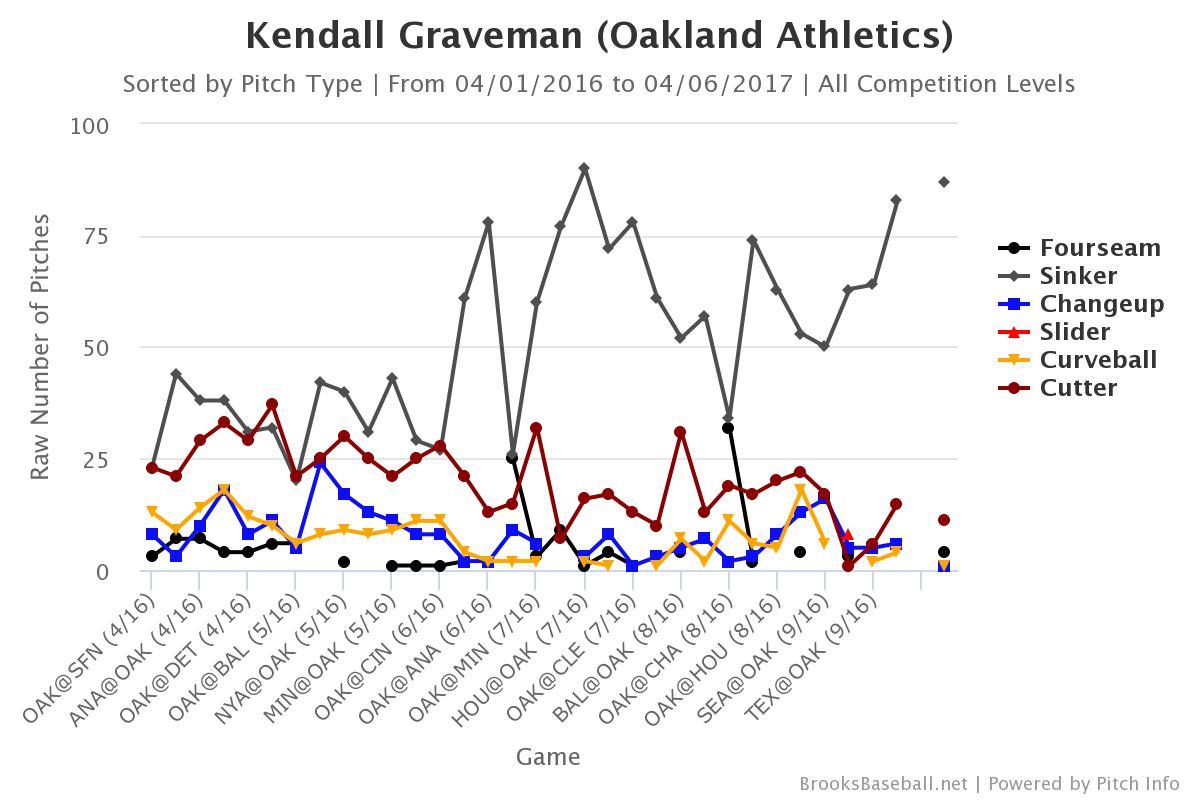 Eighty-seven. That’s how many sinkers Graveman dialed up in his 2017 debut. It’s a revamped approach that takes a page straight out of the Matt Shoemaker or Rich Hill playbook. Why not just throw your best pitch as often as possible? Clearly, it worked for the 26-year-old right-hander, who limited the Angels to just a pair of runs on six hits and two walks, while striking out seven.

I know the velocity is up significantly on the sinker but this Kendall Graveman thing… pic.twitter.com/I7XclbRxNk

My initial reaction to the recent velocity bump and pronounced change in pitch selection was to be dismissive on Twitter. That might end up being a mistake. The limited-strikeout upside (5.6 K/9 in 312 1/3 career innings) puts a dent in Graveman’s tangible fantasy upside, but if this revamped approach continues to work, he’s going to be a viable streamer in deeper mixed leagues in select matchups. I’d be hesitant to throw him out there this weekend on the road in Texas (even in deeper formats) but I’m willing to at least keep Graveman on the fantasy radar moving forward. He’s one to monitor.

The 33-year-old veteran spun six solid innings in his Astros debut, allowing just two runs and five hits with four strikeouts and a pair of walks. The only blemish in an otherwise-stellar outing came when he hung a breaking ball to Jean Segura, who muscled it out to the opposite field for a two-run homer in the fifth inning.

It’s been a minute since Morton, who made just four starts a season ago before a going down for the year with a torn hamstring, has had a shred of fantasy relevance. The velocity uptick on his sinker, which began with a 2-mph jump during his brief Philadelphia stint, is what makes Morton an intriguing fantasy pickup. 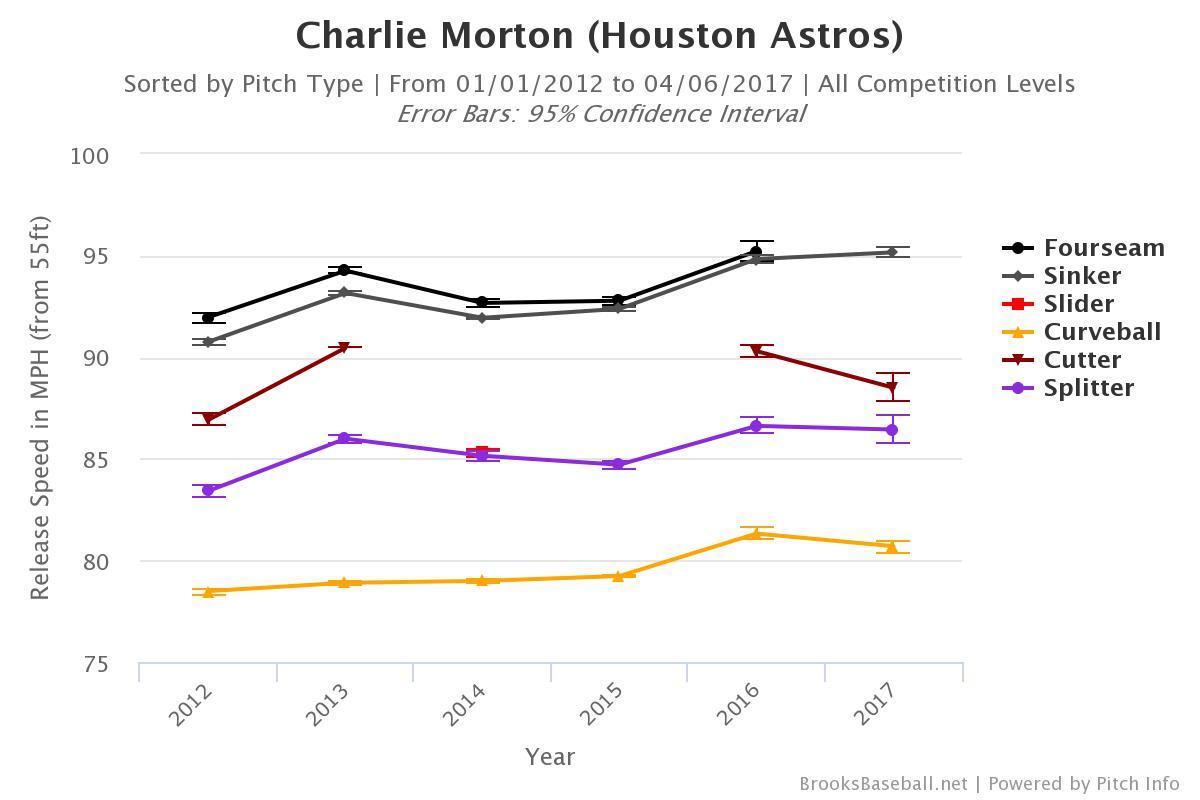 He is never going to strike out more than a batter per inning, which limits the potential fantasy ceiling, but if he can throw 160 innings (armed with a 96-mph sinker) in front of Houston’s tremendous defense, he’s going to be extremely valuable in deeper mixed leagues this year.

There’s a strong possibility that he’s been scooped up in the vast majority of AL-only formats already. If he’s still available, the 25-year-old, who hit .325/.399/.461 with seven home runs and five steals in 95 games at Triple-A last season, is worth taking a flyer on until Jason Kipnis returns from injury in mid-May. Diaz is extremely unlikely to provide enough power or speed to morph into a five-category contributor (or hold down an everyday role after Memorial Day) but he makes a ton of contact and should provide a decent boost in batting average.

There’s not a ton to get excited about from a fantasy perspective with Frazier. However, he hit for average at every rung on the minor-league ladder (career .299 average over 350 games) and more than held his own (.301/.356/.411 in 160 plate appearances) during a brief stint in Pittsburgh last season. Given that the 25-year-old led off against reigning AL Cy Young winner Rick Porcello in the Pirates season opener, it stands to reason that he’s going to occupy that spot versus right-handed pitching moving forward. Frazier, who was caught stealing an International League-leading 15 times in 2016, isn’t a very efficient base-stealer. That hasn’t deterred him from running against major-league competition. Given his propensity to put the ball in play and newfound spot atop the lineup, he should be squarely on the fantasy radar now (even in deeper mixed leagues.)

You need to be logged in to comment. Login or Subscribe
GBSimons
Frazier started in LF on Opening Day for PIT because they had the option in Boston to DH Gregory Polanco. I doubt Frazier will be out there all that often if Pittsburgh's top 3 OF are healthy.
Reply to GBSimons