We’ve long recognized Didi Gregorius as a deft hand in the field. The question was always how much he would end up hitting. It’s a question that wasn’t asked too often, given the low baseline for meaningful contribution, set cleat-high due to how good he was at one of the most difficult positions.

But last year Gregorius demonstrated hitting ability well above the ankles. He posted the best offensive season of his career, smashing 20 dongs en route to the fourth-most valuable season of any non-pitcher on the Yankees (2.2 WARP). While Gregorius wasn’t a league-average offensive performer, he was close enough, and likely would have managed that feat if he hadn’t seen a reduction in an already thin walk rate. Still, the relative explosion in power more than made up for a more aggressive approach at the plate, as he stroked a career-high in doubles to go with the aforementioned home runs.

That doesn’t make him a key to the Yankees’ 2017 season by any means. It does, however, make this is a potentially crucial season for his career, as he begins to get more expensive in arbitration. The question has shifted, then, from “how much will he hit?” to “can he replicate his success?”â€•or, perhaps, “where did that power come from and is it sustainable?”

There was a league-wide boost in power in 2016, with many players seeing a significant rise in fly-ball percentage, leading to more extra-base hits, including more home runs. This was true for Gregorius as well, as he bumped his fly-ball rate six percentage points:

That lends credence to the power outburst, even if we wouldn’t expect 20 home runs again. But wait, let’s expand our look at his fly-ball rates:

OK, so maybe the fly-ball rate doesn’t explain it all, as Gregorius was routinely over 40 percent with the Diamondbacks but failed to crack double digits in home runs, albeit in fewer plate appearances. Even without a career-high fly-ball rate, it’s possible that more of those fly balls came via optimal launch angles, right? Well, when measuring the number of balls off of Gregorius’ bat between launch angles of 22 and 30 degrees, Baseball Savant tells us there was the exact same number in 2016 as in 2015. So … guess not.

Still, we’re not out of possible explanations just yet! There’s that short porch in right field at Yankee Stadium, and maybe Didi just did a better job of lifting the ball to right, resulting in the uptick in long balls. Worse theories have been floated. Unfortunately, the data doesn’t support the notion. To wit, the following table features Gregorius’ production on pulled fly balls:

That data includes home and away games, but even limiting it to home games, Gregorius roped four additional home runs in three fewer at-bats on fly balls to right field. Last time I checked, more production in fewer chances without an accompanying process change isn’t sustainable. Even if you want to focus on pulled fly balls on the whole, Gregorius saw a six-percentage-point decrease in that batted ball outcome, which expands to a seven-percentage-point decrease if you limit it to pulled fly balls at home.

Another point of emphasis for Gregorius entering the season was to improve his production against lefties, something he did markedly, posting reverse platoon splits for the first time in his major-league career. Still, he makes the point that to achieve this success, he’s worked on “[staying] closed and hit the ball where they pitch [him].” None of this really makes Gregorius more of a power hitter, with only four of his 20 home runs coming off of southpaws, though it could lend credence to his ISO jumping up to .170, outperforming the American League average of .166 on the strength of a career-high 32 two-baggers (10 against LHP).

If we gander at where he tends to hit his home runs, we’ll note that the reduction in pulled fly balls is a bad omen for his power output, given that all of his homers were hit to his pull-side (this holds true for 2015, too): 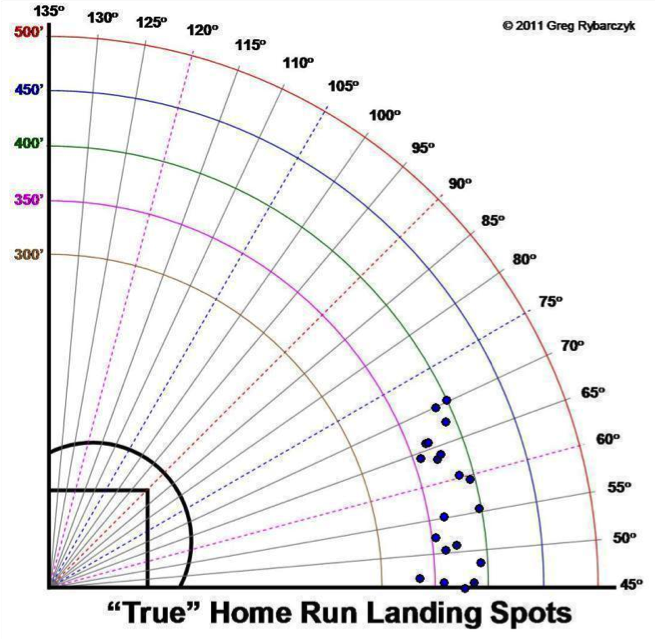 Given that pitchers overwhelmingly attacked Gregorius low and away in 2016, and are likely to continue doing so going forward, it’s difficult to see how he could sustain his career-high power output, or even come close to matching it. Marrying this with his own statement about his approach (hitting it where they pitch him), it doesn’t seem that the successful improvements against lefties were instrumental in the power outburst.

If you do want to allocate a modicum of credit to this alteration, I won’t fight you. Opposite-field singles do count in slugging percentage. But it does not account for the majority of the uptick in homers. Ultimately, this likely comes down to what—at this point—appears to be a one-time spike in HR/FB rate (4.5-point increase), and there are no underlying reasons we can find to support that bump.

PECOTA takes a bit of a rosier view of Gregorius’ power, tabbing him for 14 home runs, but ultimately takes a dimmer view of his season, anticipating a 1.5-win year. It’s not unreasonable to suspect that Gregorius can outperform this tepid suggestion—he’s surpassed two wins each of the last two years—but it’s likely that he’ll do so in a different way than he did last year, relying more on defense going forward, which is mostly how he was thought of heading into the 2016 season.

All in all, we have an adjusted approach against southpaws that bore significant fruit, but also numerous peripherals that underscore how unsustainable this power production—especially in terms of home runs—truly is, without further refinement in his approach. Pinstripe Alley noted further differences in Gregorius’ approach and how that cocktail of peripherals tends not to result in more power.

For a guy who relies on pulling the ball to right field for home runs, the willingness to hit the ball where it’s pitched (low and away) may result in a better offensive profile overall, but almost assures a reduction in home runs. Provided that comes to fruition, then the only constant about our perception of Gregorius will be that we have to keep changing it.