It’s been about eleven months since the Dodgers plunked eight figures into Diaz’s then-19-year-old lap, and by season’s end things were really starting to come together for the kid. That signing bonus represented the third-largest ever given to a Cuban player subject to pool restrictions, and it paired him with right-hander Yadier Alvarez as the faces of Los Angeles’ massive international outlay during the 2015 signing period. Come spring time, the club made an aggressive decision to assign him to High-A after the briefest of cameos in Arizona. He spent the entire remainder of the season as the second-youngest regular in the California League.

That’s a lot to handle for any young player, let alone a kid coming to America for the first time and trying to learn a brand new language and set of cultural norms. The challenges he’d face certainly weren’t lost on those in the organization charged with helping him navigate them. “Baseball is all interconnected,” philosophizes Drew Saylor, Diaz’s precocious first-year manager at Rancho Cucamonga. “What we do off the field affects what we do on the field, and vice-a-versa. The primary growth opportunity at the beginning of the season was for him to get to be comfortable inside and out of the clubhouse.”

While the off-field transition was the early focal point, the talent on the field was evident immediately, if a bit raw. His very first professional plate appearance turned out to be a nice microcosm of his inherent strengths and initial weaknesses.

It’s a fun battle. He expands repeatedly above the zone, including a couple over-swings (and misses) at early velocity. But then he’s cognizant of the pitcher’s plan of attack once he’s got two strikes, he shows quality recognition and discipline in laying off junk away, and he’s got the quickness into the zone to foul off a bunch of tough velocity in the upper quadrants even as he’s protecting for soft stuff and benders.

Diaz put up some numbers initially, with a monstrous .308/.356/.596 tally in April as the league’s pitchers got a sense of what they were dealing with. But the underlying process wasn’t quite there, and the landscape shifted quickly. He appeared to make some mechanical tweaks at this point as well, lowering his hand position and parking his weight further onto his back side.

The combination made for a rude awakening, and just as he was starting to settle in off the field the ensuing couple months marked a period of significant adjustment on it. A nagging shoulder injury derailed him for over a month in the middle of the season, but before it did his numbers had come crashing back down to Earth. Still, his whiff rate remained impressive at just 14.6 percent before his DL stint, pointing to a highly intriguing innate approach.

“Seeing guys who had a little bit more velocity, sharper breaking balls than he’d seen, it took him a little bit of time to get accustomed to that,” notes Saylor. “But from the start he was a very good two-strike hitter. He was swinging out of his shoes early in counts, but you could see there was a psychological change that led to a physical change in his swing whenever two strikes happened.”

Diaz’s best attributes as a hitter are natural bat speed driven largely by lightning-quick wrists and impressive plate coverage to the outer-third. He’s able to stay back well on spin, in part because he’s quick enough with his barrel that he can flick balls out to right even when he’s beaten away. But there’s also enough present strength to where he can drive the ball to right-center, too. Here he is in May just getting under one, but still putting a decent charge into it despite not getting a ton from his legs.

More often than not his at-bats during this middle stage of the season ended this way. The theory to work the ball towards the right side, and the instincts to get to pitches…both of those things were present. But he wasn’t quite able to keep up with the caliber of stuff he was seeing, and he certainly wasn’t showing much inclination to turn on the ball or drive it with any consistent authority.

His return from the DL coincided with a nice run where he started taking better advantage of his hand speed by stringing together base hits back up the middle. It wasn’t an accidental development either, as the coaching staff made sure he came back with a plan. The goal? “Let’s try to find a way to get him to control the swing, and not sit there and over-swing,” recalls Saylor. “The way they pitched him in Cuba, it actually helped him, because it got him to understand how he was going to get pitched to behind in the count. It was like ‘listen, they’re gonna be off the plate, they’re gonna bury balls, elevate, try to get you to chase.’ With any type of adjustment you try to get the player to make there has to be buy-in from that player, and he bought in.”

Reminding him of his strengths helped establish a more consistent level of baseline comfort, and it was Phase One in his growth as a hitter this year. With confidence in his ability to find hits against pitchers’ pitches, Phase Two involved getting him to feed his aggressiveness more consistently, and start driving balls he could handle with greater authority. That’s when things really started clicking.

“From a mechanical standpoint,” offers Saylor, “for him to use his lower half more is always going to be imperative. Worrying too much about your hands, that’s when you lose your legs and your leverage in the swing. But when you approach it from ‘okay, how can I get my big muscles to deliver my little muscles to the ball,’ that’s when we see guys able to execute swings more consistently and barrel balls. And that’s what [Diaz] was able to develop over the course of the season.”

Sure enough, the shift in approach started to pay dividends in his results, and he closed with a .287/.330/.491 line across his final 26 games. While there was some High Desert inflation involved in the production, the process evolved notably. Take a look at his before-and-after spray charts on both sides of his DL stint: 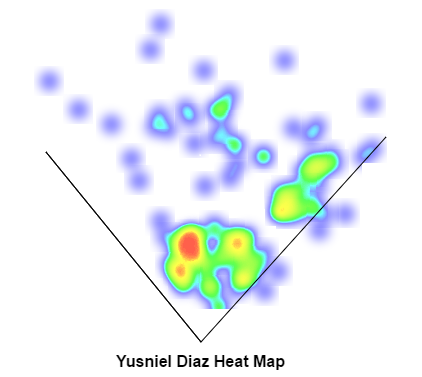 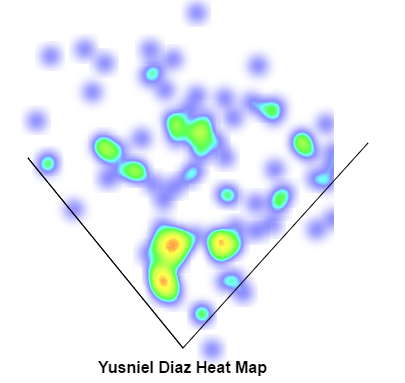 Those pitches he’d been content to push into right field earlier in the season he started pulling with some power and elevating to center through the second half. That’s the kind of progress you want to see from any hitter in a minor-league season, but to see it from a 19-year-old in his stateside debut? That’s the stuff, right there.

“He’s a grinder,” concludes Saylor. “He’s a guy that likes to go out there and play. He has some flair and some energy, and as he learns who he is you’re really going to see him come out and be a bigger personality.”

Not that they needed more good news down on the farm but, in Diaz, the reigning top team in our organizational rankings has another good young player on its hands.

You need to be logged in to comment. Login or Subscribe
derekdeg
Great article. Link to the scouting report is broken though
Reply to derekdeg
TheArtfulDodger
That should be fixed now, thanks!
Reply to TheArtfulDodger