Last year, Magneuris Sierra got dropped from Peoria midseason, the rare case of a good prospect moving backward. It stalled what had been an encouraging rise for the slender center fielder, who is back in Peoria with the St. Louis Cardinals Low-A affiliate this season. The Cardinals signed Sierra out of the Dominican Republic back in 2012 for just $105,000, and he quickly found favor with evaluators and prospect writers. But leaping from the rookie league to Peoria in 2015 may have been too much too fast for the 19-year-old.

“Last year, you know, I was a young guy when I came here,” said Sierra. “I didn’t have a plan when I go to the batters’ box.”

Getting called into the manager’s office on June 7th last season may have slowed the momentum on his development, but Sierra learned what so many promising athletes have learned before him: Success is about adjustments, and prospects all have flaws.

"He’s undersized and offers little in the way of power, even when he barrels the ball up," Jeff Moore wrote early in the 2015 season. "Don’t get me wrong, he’s good, with a strong hit tool matched with plus speed that can make him a top-of-the-order threat. But there’s a long way to go."

After a strong second half in Johnson City last year, Sierra earned a return to Peoria this season, and it’s gone much better. He’s hitting .303/.338/.381 in 479 plate appearances and has really taken off in the last month, hitting .363/.414/.431 in 112 trips to the plate. He’s third in stolen bases in the Midwest League with 29—despite being first with 14 times caught stealing—and is the youngest regular on his team.

But the stats don’t tell the story of his adjustment.

“He’s been pretty consistent. He’s done a much better job of putting the ball in play, he uses the whole field,” said Peoria manager Joe Kruzel. “It doesn’t appear like he’s chasing as much as he used to in the past, so I think his maturity level is really moving in the right direction. I think he’s just becoming a little more confident in himself.”

A major part of using the whole field has been Sierra’s work against left-handed pitchers, according to Sierra’s hitting coach, Jobel Jimenez, who has worked with him in both of his stints in Peoria.

“You know, he was struggling last year, especially against lefties. So this year we focused more against lefties,” said Jimenez. “It’s difficult to play every day in the big leagues. So our goal this year is to stay focused against lefties, more left-center, let the ball get deep into the zone and try to put the barrel on it.

“Don’t try to do too much, just be aggressive in the zone but stay focused on left-center.”

In 2015, Sierra rarely hit the ball to left field off of left-handed pitchers, and collected just five hits that way. 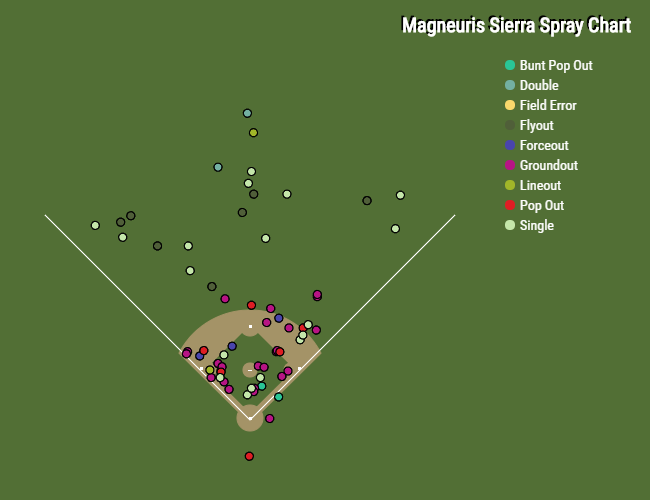 In 2016, the results paint a complete picture of his work in changing his approach against left-handed pitchers. 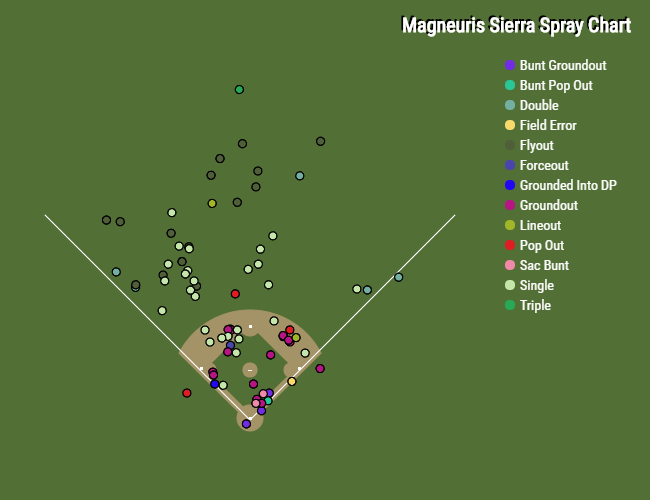 Lefty on lefty; working on staying inside the ball, going the other way. Sierra has improved upon this aspect of his game in a big way.

For a player who struggles, the ability to stay positive—or to find a way to stay positive—goes a long way. For Sierra, it was encouraging to have strong defensive tools, so he could keep contributing to his team and still feel like a prospect.

“When I was in spring training, Yadi Molina talked to me about the counts, the hitters, and playing with the counts to get better jumps and stuff,” said Sierra. “He was a really big help. I learned a lot from Yadi.

“He said I can play in the big leagues right now on defense, because I’m a really good outfielder. And he said in the minor leagues not every hitter can drive the ball deep. So I can learn to play shallow, I can play deep, depending on the hitter.”

Kruzel’s eyes lit up at the opportunity to discuss the kind of talent Sierra has flashed. He’s made several dazzling plays in center field, utilizing his speed and showing off a surprisingly strong arm for his frame.

“He’s very talented out there. He gets extremely good jumps, he’s got a knack for going and getting the ball,” he said. “He’s got that little extra gear when he gets going, to track those balls down. He’s got an above-average arm with accuracy. He plays somewhat fearless out there, which you like to see in your outfielders, but especially your center fielder.”

It has also helped that Peoria has been winning. While developing the player on the field and at the plate is the most important part about the experience in the minor leagues, the Cardinals also focus on making "winning ballplayers." How they do that has a lot to do with achieving on-field success, and how the players react to it.

“I think that, don’t get me wrong, we all want to win, but the development and what’s right for the player is most important thing,” said Kruzel. “Sometimes winning, from the perspective of the players, helps the development move quicker.”

Jimenez took it one step further, talking about how winning affects the attitude in the locker room.

“When you win, you know, you develop better,” he said. “The guys are going to come back to the field and enjoy it, and have fun in the clubhouse, and it’s different when you’re losing. But when you win games, it’s different. The energy is different.”

The next step for Sierra would be playing at High-A in Palm Beach, and then possibly Double-A not too long after, but Sierra will continue to develop no matter what level the Cardinals send him to. He has the talent, the work ethic, and the winning attitude that they cherish in their young players. It seems like only a matter of time before he’ll be displaying it—along with his speed and defense—at the big-league level.

You need to be logged in to comment. Login or Subscribe
noone99
Good stuff
Reply to noone99
mdthomp
This is awesome Ryan! Thanks
Reply to mdthomp