I must confess: I have not thought much about Keon Broxton lately.

I was vaguely aware, I think, that Broxton was in the running for the Brewers Opening Day roster. Logically it must have come up during my research for Milwaukee’s Effectively Wild preview. He had been dealt this winter from Pittsburgh as part of the Jason Rogers trade.[1] As it happened, he did actually start Opening Day, beating out fellow former sort-of prospect Kirk Nieuwenhuis for the honor. He started the season 0-for-16 before being sent down to Colorado Springs.

I don’t expect you to recall Keon Broxton in similar detail, but you may have seen this[2]: 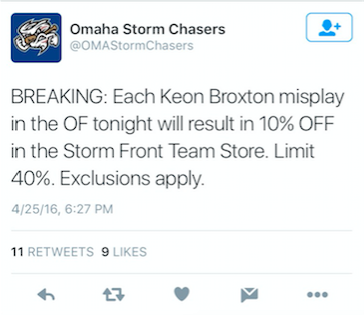 My title is nominally “prospect writer” but a lot of what I do involves interacting with “the minor leagues.” It often gets overlooked that these teams are only very tangentially a vehicle for me or anyone else to see top prospects. The business of putting on an actual baseball game is more in their lane, but they are primarily (and many of their GMs and owners will tell you this) in the entertainment business. They compete for families’ dollars with movie theaters and mini golf and zorb soccer[3]. They want to beat out the local bowling alley or karaoke bar for your corporate outing. They are driven by sales, not scouting.

So you are a Minor League GM of…oh, let’s say the Knoxville Mountain Chickens. You have no idea how good your team is going to be in any given year. And you can’t really bank on a fan relationship with the players, since you will rarely have any of them for more than one season, if that.[4] You still want to recreate the atmosphere of a baseball game though, a little bit of us-versus-them to go along with the de rigueur Thirsty Thursdays and an in-between inning entertainment like a bluegrass band mascot race and some sort of “chicken dance” dance off.[5]

I’ve seen different organizations take different tacts here,[6] but one of the most common forms is some sort of giveaway if an opposing batter strikes out. It’s an easy marketing gimmick and inspires a bit of family-friendly ribbing of opposing batters. For example, Rochester has the “Taco Bell K Man of the game,” which inspires good-natured “Taaaaaaaco” catcalls every time the batter falls behind 0-2. Broxton may have even worn that crown himself a couple times when he was with Indianapolis. He’d be a logical pick to increase the odds of sending the fans home happy given his swing-and-miss issues, but it is also the kind of thing that just blends into the background noise of the game.

The Storm Chasers tweet, however, just felt weirdly mean-spirited. Your immediate reaction is to wonder what Broxton might have done to the social media intern. Did he grab Broxton a few rounds too early in his re-draft league? It was personal in a way that the minor leagues never really are. It was jarring. “Defensive misplays” is a weird standard too. I guess we never did find out what exclusions apply, so maybe that would have explained further. Regardless, it feels boorish to ask your fans to root for a player to muff a ball or overthrow a base, all to save a few bucks on a pair of fleece sweatpants.

This is the point where we run the risk of veering into treacly Rick Reilly territory, wherein I talk about how Keon Broxton is 0-for-18 in his major league career, and how baseball is hard, and we don’t appreciate how good you have to be at baseball to be a bad major leaguer. And all those statements are true. I could drone on about how Broxton isn’t all that different from Garin Cecchini, Josmil Pinto, or Travis Snider, all of whom shared the field with him that night. A (probably) cold night in Omaha, long sleeves, steaming breath in the air, smell baseball, and what not. There’s even a pat ending, as Broxton hit a go-ahead home run in the game where all eyes were supposed to be on him in the left field. But this being the Pacific Coast League, you get a PCL ending rather than a Hollywood ending. And wouldn't you know it, Broxton did muff a ball in the sixth.

But still, I did get to thinking about Keon Broxton. I’ve written before about what my editors termed the people that make baseball happen. Broxton falls into that category nowadays, but once upon a time he was a prep pick full of projection. And that's the name of our game. Everything is a projection. But when the image doesn't quite come into focus, like it didn't for Broxton, we still want to project. People on Twitter rushed to his defense shortly after the tweet went up. A cursory search indicates that unlike a large percentage of his cohort[7] Broxton does not have a Twitter account. So he may not have even known this happened. He went off for the rest of the series, hitting another home run the night after, two doubles the night after that. This was probably not a response to a Minor League team's violation of Rule 1, just a guy trying to get back to the majors. But now I'm projecting.

The guys good enough to get 18 hitless at-bats in the majors are so far to the right end of the bell curve as to be alien. I can't know what motivates Keon Broxton. I watch baseball players. It's what I do: in games, in drills, in the dugout. He's a little flashy in infield, what does that mean? How does he handle failure? And sure, why not, it's 2016: How does he handle criticism on Twitter?[8]

Now things have been set in motion. It's a redemption story. #BaseballTwitter is paying attention for at least as long as their attention span usually lasts. Broxton will likely get another shot in the majors. The Brewers are bad and he still has useful tools. He will get more major-league at-bats and a major-league hit along the way.

[3] I may have included this as an example just so Craig would have to fact­check its existence.

[4] Players that do spend multiple seasons at an affiliate inevitably get tagged with the nickname “mayor,” which is one nickname you absolutely do not want as a minor leaguer.

[6] In Norwich, they play “embarrassing” walkup music for the opposing batters, a playlist seemingly curated by an over­caffeinated tween from 1994.

[9] As I read this over one last time, a few days after starting the piece, I finally noticed that Omaha's team store is called “Storm Front.” Again, my consulting rates are very reasonable.

You need to be logged in to comment. Login or Subscribe
treadmill
Nice MM reference, Jeff.
Reply to treadmill
CraigB
I hope Keon makes it. He really seemed to be making progress at Altoona and Indy. And he just looks like he is having fun. Bryce Harper and the Nats, take note.
Reply to CraigB
lloydecole
A really well-written and affecting piece. Thank you.
Reply to lloydecole
newsense
I noticed the Storm Front thing before I saw the twitter handle. It made me wonder if the White Power guys were starting a campaign to bring back the color line in baseball.
Reply to newsense