Joc Pederson was selected in the 11th round (352nd overall) of the 2010 draft, but it wasn’t until midseason 2013 that Joc Pederson found himself on a top-100 fantasy prospect list here at Baseball Prospectus. Although Pederson was given second-round money to sign with the Dodgers out of high school, many scouts were unsure of the totality of his physical tools and felt that he may struggle to hit left-handed pitching at higher levels. The lack of a plus hit tool scared away many, despite quality bloodlines. Joc’s father Stu was drafted by the Dodgers higher than he was (ninth round, 229th overall), taken four picks ahead of noted Tom Emanski product endorser (and borderline HOFer) Fred McGriff in 1981.

Fantasy owners certainly care about physical tools when evaluating a prospect, but they care more about the prospect getting the most out of them and consistently translating those tools into results on the field, which Pederson did at every minor-league level. Another reason why Pederson was slow to rise up the prospect rankings was that the Dodgers only gave him 60 plate appearances in a neutral hitting environment (the end of 2011 in the Midwest League, as a 19-year-old) before he reached Double-A Chattanooga in 2013. Many were quick to write off Pederson’s production in the Pioneer League and California League because of the great hitting parks he called home in Ogden and Rancho Cucamonga, respectively. After Pederson produced at Double-A in 2013 to the tune of a .878 OPS paired with 22 home runs and 31 steals, it was too late for many dynasty league owners to scoop him up and reap the rewards that he is currently providing in the majors.

Pederson’s ascent to fantasy cornerstone-dom has been rapid, and his classic power/speed combination has left dynasty owners scrambling to make sure they don’t overlook a player who fits the same profile. Pederson was one of six minor leaguers to hit 20 homers and steal 20 bases in 2014, joining prospects of various statures in Michael Taylor, Teoscar Hernandez, Alex Glenn, Jared Hoying, and Chris Dominguez. Let’s take a closer look at five prospects who have a chance to make up this year’s 20/20 club, which could lead to a similar rise up the Dynasty 101:

A former sixth-round pick in 2012 from a Florida high school, Phillips struggled to hit for power in his first two years of pro ball, which led to him making a minor mechanical adjustment aimed at generating more loft and saw him take a big step forward with the bat in 2014. Phillips started the 2014 season in the Midwest League, where his .302/.362/.521 line with 13 home runs and 18 steals in 103 games earned him a promotion to the California League to finish the season. Predictably, his numbers did not suffer in the hitters’ haven that is Lancaster, and Phillips finished the year with 17 home runs to go with 23 steals (in 37 attempts), good for a .905 OPS, which earned him Astros Minor League Hitter of the Year honors. Phillips was assigned to Lancaster once again to start his age-21 season and has continued to make hard contact, as evidenced by his .225 ISO in 139 plate appearances, adding five home runs and three steals to start the year. “Maverick” will likely earn a promotion to Double-A Corpus Christi at some point in 2015, and his power will certainly be tested at that point, but look for his solid on-base skills (.368 career OBP) to help ease the transition.

Fisher was a popular target this winter in dynasty first-year player drafts, and rightfully so, as the former Virginia Cavalier swiped 17 bags in 21 attempts in his first taste of pro ball after being selected 37th overall in last June’s draft. With Brett Phillips manning center field in High-A ball for the Astros, Fisher was assigned to Low-A Quad Cities of the Midwest League to begin his age-21 season, and he has clubbed five home runs in his first 107 plate appearances, chipping in three steals and looking dominant at the plate with a .340/.421/.596 line. Fisher looks ready to be challenged at a new level, which likely won’t happen until Phillips is promoted to Double-A. As dreamy as Fisher’s fantasy ceiling may end up being, he’ll certainly never surpass the no. 1 D-Fish of all-time in many hearts.

Ervin battled a wrist injury throughout 2014, which caused his power to evaporate (seven HR in 561 PA) and saw his OPS fall all the way down to .680, down from the .989 mark he posted in his draft year of 2013. Ervin didn’t stop running in 2014, stealing 30 bases at Low-A Dayton of the MWL. The former 27th-overall pick was waiver-wire fodder in many leagues to start 2015, which also saw him assigned to a more difficult hitting environment in the Florida State League, but Ervin has responded to the challenge, already surpassing his home run total from 2014 in 144 plate appearances. Ervin has six steals to go along with his eight home runs and has added over a hundred points to his ISO from 2014, checking in with a .248 mark in the early going. Ervin’s .283 BABIP is line with his mark from last year, and he is showing an improved approach at the plate this season, raising his walk rate and lowering his strikeout rate from 2014. With continued health, Ervin should find himself back on top-100 fantasy lists in short order.

Opinions are divided on Zimmer’s ultimate ceiling as a hitter, but low-double-digit numbers in home runs and steals at the big-league level should be attainable for the younger Zimmer family member.
Zimmer has done nothing but hit and run since signing last summer, and has already stolen 15 bases (in 16 attempts) in 33 games at High-A Lynchburg in 2015, adding five home runs. The Indians had Zimmer essentially skip Low-A, only playing him in three games to end 2014, and will likely be aggressive in pushing the 22-year-old, who could see the majors at some point in late 2016 or early 2017. There is a roughly zero percent chance that the Indians will let Michael Bourn get the 550 plate appearances in 2016 needed to trigger his vesting $12 million option for 2017, so Zimmer may be an option to supplant him at that point.

Story jumped onto the radar of dynasty league owners in 2012, tearing through the friendly confines of Low-A Asheville by slugging 18 home runs to go with 15 steals as a 19-year-old. He was looking like the next middle-infield beast to be powered by Coors. His 2013 season was a source of bewilderment that saw him lose over 100 points off of his slugging percentage, despite moving to one of the best hitters’ parks in the minors, Modesto of the California League. Story managed to steal 23 bases in 2013, but he was sent back for another go-around at High-A in 2014, when he posted a much-improved line of .332/.436/.582 line in 218 PA, adding 20 steals before being moved up to Double-A Tulsa to finish out the year. Story struggled mightily once again in his first taste at a new level, looking lost at the plate and cobbling together a .683 OPS in 56 games while striking out 34.6 percent of the time. He was predictably sent back to Double-A to start 2015, this time to the Rockies’ new affiliate in the Eastern League. 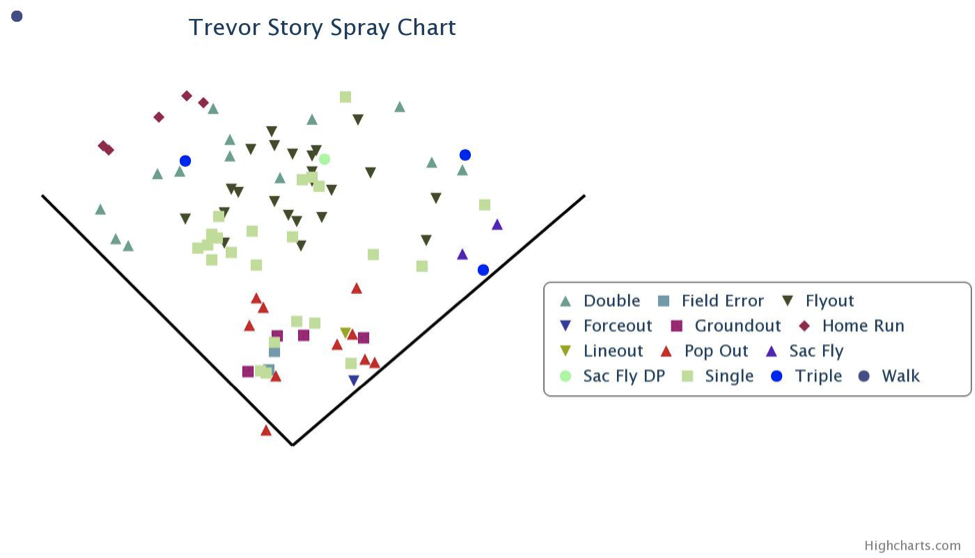 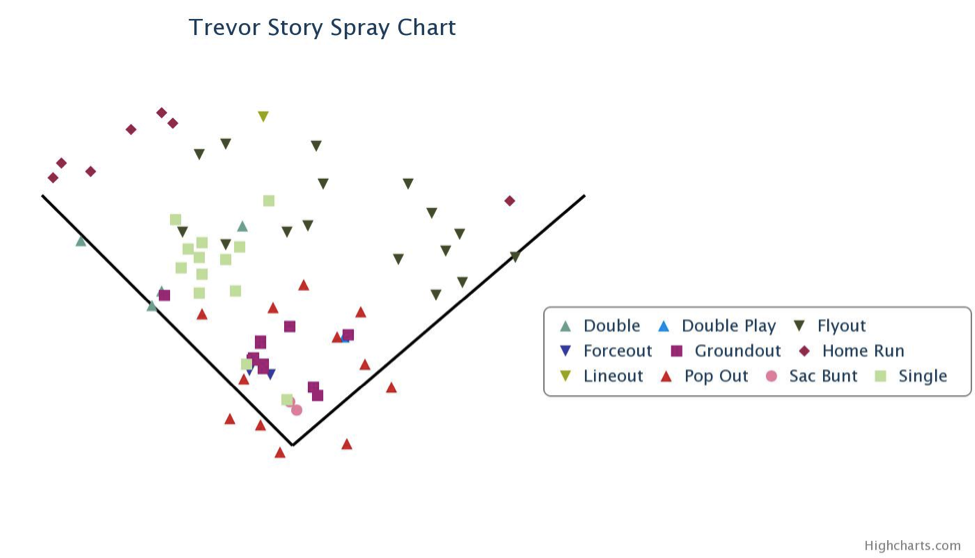 Story has been crushing virtually everything pitched his way in 2015, putting up an obscene .348/.453/.616 line,and adding five home runs and six steals in his first 31 games. Story’s .459 BABIP will obviously come down, but his walk rate of 14.6 percent would be a career best mark if it holds and his 25.5 percent strikeout rate would be his lowest since his 2012 breakout. As indicated by the spray charts above, Story is making more hard contact overall in 2015, seeing his fly-ball rate soar to nearly three times his ground-ball rate, as opposed to an almost equal occurrence in his first look at Double-A pitching in 2014. Story will likely struggle for an extended period when he reaches the big leagues, so be wary of cutting bait too soon. He certainly has the look of a prospect who takes time to make adjustments at a new level.

You need to be logged in to comment. Login or Subscribe
Schere
thanks. I own Story...any thought on when he might see the majors? Any chance they use him to fill their dismal 2B spot, or am I waiting on something to happen with Tulo?
Reply to Schere
Dodger300
Could you please explain the reason you characterized the Rockies as having a "dismal 2B spot?" D. J. LeMahieu has played every game but one there and is hitting .315/.372/.396. His OPS is .768 and his WAR is .4, which is currently a bit better than Tulowitski's .740 and .2. In addition, LeMahieu won the NL Gold Glove at second base last year. So why do you call his production "dismal?"
Reply to Dodger300
Schere
eh, because I'm an idiot.
Reply to Schere
Schere
though, you know LeMahieu just had a hot April (.968 OPS) and a terrible May (.536 OPS) and has a lousy track record at the plate. So, he's not the future.
Reply to Schere