Craig and I went to Arizona again this year. We drank beer and stared into Jeff Quinton’s eyes and watched baseball. Here’s how we feel about some players we saw, because #scouting:

Given my fetish for short, right-handed pitchers who throw hard, it should come as no surprise that LeClerc was already on my radar. Dedicated listeners of TINO might recall me dropping his name a time or two, even though he was a pure relief prospect, thanks to his dynamic fastball and hammer curveball. What I was aware of but couldn’t firmly grasp made itself known during his multi-inning appearance in a backfields game against the Dodgers.

The Rangers are stretching LeClerc out to be a starter, and as you might image, a key piece of this is developing a third pitch. Or maybe I should say a second pitch, because the pitch he showed in my viewing might well be his best offspeed—better than the curveball that Tucker Blair put a future 60 on last season. LeClerc throws what he calls a cut-changeup, but scouts will often refer to as a slider. Most of the time it does show glove-side run, but occasionally it will just drop straight down, and even more rarely it will show arm-side run and cut in on right-handed batters. No matter what the pitch does, we know it generates swing-and-misses.

Add the pitch that Jordan Gorosh refers to as the “deathball” to a low to mid 90s fastball that shows significant life, and a hammer curveball with big, sharp break and LeClerc has a starter’s toolkit in a reliever’s body. It’s an open question as to whether he’ll hold up over the course of a full season, but to nobody’s surprise, I’m higher on him than I have any right to be.

Renfroe is listed at 6-foot-1, 215 pounds. You read this and you probably think “okay, Renfroe is a decent-sized guy.” Then you see Renfroe in person, and your thoughts quickly change to “that is a large, large human being.” I’m a bit biased because I saw Renfroe hit a ball approximately 5,000 feet in Arizona, but even before that majestic swing, I was impressed with his bat speed, size and approach, and he’s fast becoming a prospect crush of mine.

It’s fairly obvious that Renfroe has some holes in his swing, but based on what I had read before seeing the right fielder, I thought they’d be more apparent. For a power hitter–and make no mistake, Renfroe has 70 raw—Renfroe’s plate coverage is fine, and he has better bat speed than I had imagined. He also spat on some pitches outside the zone and refrained from swinging at some enticing, but ultimately unusable, strikes, and while it’s just spring training, I walked away encouraged.

Renfroe’s above-average speed wasn’t on display when I saw him, but when you consider that he received a 5+ run tool grade from the fantasy team before the season began, it’s pretty clear that Renfroe’s got an enticing package of fantasy tools. Renfroe doesn’t have to rake to be a fantasy factor. He just needs to hit .240 or .250, and his 25-plus homer power, 15-plus steal speed and strong OBP skill should lead to a strong OF3 and borderline OF2 in his prime.

While it’s always unfortunate not to get to see someone in game action, the guy I regret only catching in BP the most is Harrison. While I wasn’t necessarily down on the second-round pick heading into spring training, I was wary of the risk involved.

Harrison showed impressive speed pre- and post-signing, but there was question about whether he’d gain enough weight to hit for a worthwhile amount of power. Those questions are answered, as Harrison looked like he belonged on the football field—which Milwaukee was smart enough to sign him away from.

The ball flew off Harrison’s bat thanks to plus bat speed that compensates for his load. He barely involves his lower half at all, but still generates power. Once the Brewers get him to incorporate his legs into his swing, he could start to hit the ball with real authority. Assuming his additional weight (which appeared to be good weight) didn’t significantly impact his speed, Harrison could be a five-category contributor down the line. He’s still a raw prospect, but seeing how well he drove the ball despite unneeded limitations gives hope that with anticipated corrections, he’ll become even more proficient at doing so.

Okay, okay, I’m speaking more about Brinson than Craig is about Mazara as of late, but the heart wants what the heart wants. Craig and I both became attracted to Brinson in Arizona in 2014, when we saw him go home to first in 1.4 seconds (unofficial time) as well as rip a few balls in B games. This year, my lust turned into love, as I saw Brinson continue to actualize his tools before mine (beautiful) eyes, hitting at triple and zoom around the bases all while sporting the body of a Seahawks defensive back.

The knock on Brinson coming out of the draft was that he was all tools and no refinement, and elements of that criticism still ring true today. But the 20-year-old demonstrated a better approach in 2014, even if that still included striking out in 25 percent of his PA, and it’s hard not to be seduced by what Brinson could become of he keeps progressing at this rate. Except for the hit tool, everything is there.

And let’s be clear: Brinson doesn’t need to hit .280 to be a fantasy asset. He just needs to hit enough to matter. He’s got the power to challenge for 20-plus homers and enough speed to challenge for 30-plus steals, and while he’s a longshot to reach those marks, he’s got very, very high upside. Investing in Brinson isn’t for the faint of heart, but if you don’t do so now and he succeeds again in 2015, it will be way too late to buy in on him at the ground floor. You know, like Craig and I did last year.

Craig, before we left: “I was just talking to Chris Mellen and he says to be prepared because Mejia is a lot smaller than you think.

Me, before we left: “Ya ok whatever Craig u r dumb.”

Me, on the field: “Damn, Mejia is really small.”

Listen, I didn’t come away with any great scouting conclusions from my time seeing Mejia. But holy crap is he a lot smaller than I thought he was, and he exhibited a lot of #slack when we saw him take live BP. That is in no way a comment on his makeup, because I think anyone this side of a Cardinals middle infielder would slack off in spring training live BP from time to time. But the overall “meh” feeling (scouting term) I was left with after seeing Mejia did make me think about his fantasy profile as a whole.

Mejia has been a sexy name in deep fantasy leagues for a while now, thanks in no small part to Mr. Goldstein, but what does he truly represent? He’s a 19-year-old backstop without any experience beyond Low-A. He’s at least three years away from the majors, and while there’s legit reason to be optimistic about the hit tool, he doesn’t look to have the type of power that could transform him into a consistent top-five fantasy option at the position.

Once again, this is less about any sort of “scouting” of Mejia as much as it’s about the way this trip made me think about his fantasy profile. We know how investing fantasy catching prospects generally turns out, and given Mejia’s distance from the majors and modest-ish upside, I’m suddenly of the opinion that he really doesn’t belong anywhere near a dynasty top-150 list. He’s a great name to keep in mind if you’re a fan of baseball or the Indians, but he’s a poor investment for our purposes.

Francisco Mejia is a beautiful, tiny person who moves like a baseball playing rodent behind the plate… in a good way. Because of Carsley’s callous, wrongheaded words above—and the extended period of time spent with him in a place that doesn’t observe daylight savings time—there’s no possible way he could have improved his stock. That being the case, he still fell short.

While he does approach baseball with a positive attitude, Carsley is easily distracted and could be a problem in the clubhouse. When it comes to offense, too often he’ll swing big, when his game is really death by a thousand papercuts. He needs to use his speed to his advantage. Defensively, he’s extremely quick but often overshoots his target.

I’ll admit, my expectations were high going in, and his eyes remain an 80-grade tool. Still, it was a disappointing performance overall. Perhaps a bit of fatigue is setting in and this is more about me than it his Carsley… but that seems unlikely.

Guy We Couldn’t See Because of The Bad Head: David Dahl, OF, Rockies 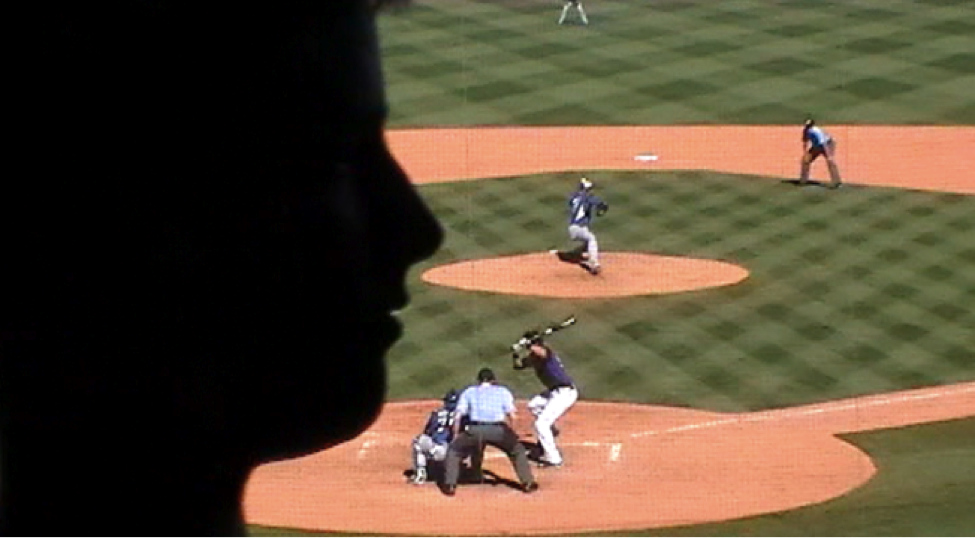 Ben: This man has The Bad Head. It is not good.

Craig: I’ll never forget the time I could have seen David Dahl. What do you think is going through this guy’s dumb head at that precise moment?

Ben: It’s about to be (what I assume is) Dahl’s sweet, left-handed swing. Or, as Mauricio Rubio would say, “look at Dahl’s ass.”

Ben: In real life, as on Twitter, you deserve to be blocked by nameless faces.

Both informative and entertaining.

A welcome addition to my favorite website.
Reply to buckoneil
Muboshgu
I'd like to hear Ben and Craig go at it on the next TINO about Mejia.
Reply to Muboshgu
fawcettb
Why on earth is BP sending nine-year-olds to scout Spring Training. I don't get it. Oh, wait...

Reply to fawcettb
TheArtfulDodger
I've had enough of your creative writing school comments. More analysis and fewer jokes.
Reply to TheArtfulDodger
Muboshgu
How dare you, Craig. Don't you know you're not supposed to enjoy your job?
Reply to Muboshgu