Fantasy analysts often focus on post-hype players—guys like Brett Lawrie, who entered the league as future stars, but haven’t yet lived up to their potential. Post-prospects are the young players who no longer have rookie status and who were never highly hyped prospects. Players who may have been top-10 prospects in their respective orgs, but were never seen as program-changers like post-hype prospects.

We’re focusing on the National League today. Here are five post-prospects to watch as we cruise into fantasy draft season:

The left-hander rocketed through the Reds’ farm system in 2012 and 2013, before starting 18 games and striking out 28.6 percent of the batters he faced in the majors. He posted a 2.92 ERA and was a popular upside pick heading into the 2014 campaign. Unfortunately, Cingrani imploded—along with the majority of the Reds’ roster—with a 4.55 ERA and a 12.5 percent walk rate. His strikeout rate dropped, the homers remained a problem, and the BABIP regressed to .292. It was all bad.

For Cingrani to progress and become a viable fantasy starter in mixed leagues, he must figure out a way to consistently retire righties. The most prevalent criticism of the 25-year-old has been that he relies on his fastball too much. He threw a fastball 81.5 percent of the time in 2013. That number decreased as he tossed more sliders and changeups a year ago, but those pitches still weren’t effective against opposite-handed hitters. Righties hit .267/.359/.503 against Cingrani. As a lefty, he’s on the wrong side of the platoon advantage, and unless something changes, he’ll continue to get blown up.

Some have suggested his success in ‘13 indicates an ability to retire righties. That’s not really true. He benefited from a .234 BABIP against righties that year, and while a low BABIP occasionally indicates weak contact more than bad luck, his ballooned 11.9 percent walk rate and 1.55 HR/9 against righties quickly dispels that rumor. Cingrani has never been good against righties. If the results were there, the underlying peripherals were not. For him to find success over the course of a season, then, fantasy owners are banking on sustained luck. That ain’t a safe bet on draft day.

Gyorko is only 26 years old. He has roughly two pro seasons under his belt, but remains a post-prospect in many ways. He launched 23 homers in his rookie season; however, a foot injury sidetracked his 2014 after he was pitiful to begin the year. The 2015 campaign feels much like his true sophomore season. The former second-round pick seeks to prove his .210/.280/.333 slash line a year ago was an aberration, rather than a harbinger for things to come.

It’s perhaps notable that Gyorko rebounded a bit in September, hitting .267/.365/.378, after spinning his wheels following his return from the DL in late July. But, really, the question that preoccupies fantasy owners centers on his power production. Even when his average and on-base percentage climbed back to a reasonable level in September, the power was still absent. Where did it go?

I think the answer lies in the sophomore-slump cliché. That is, the league got a chance to study tape over the offseason and exploited his weaknesses. Pitchers started to pound him in on the hands, from the waist and up. He couldn’t handle it. 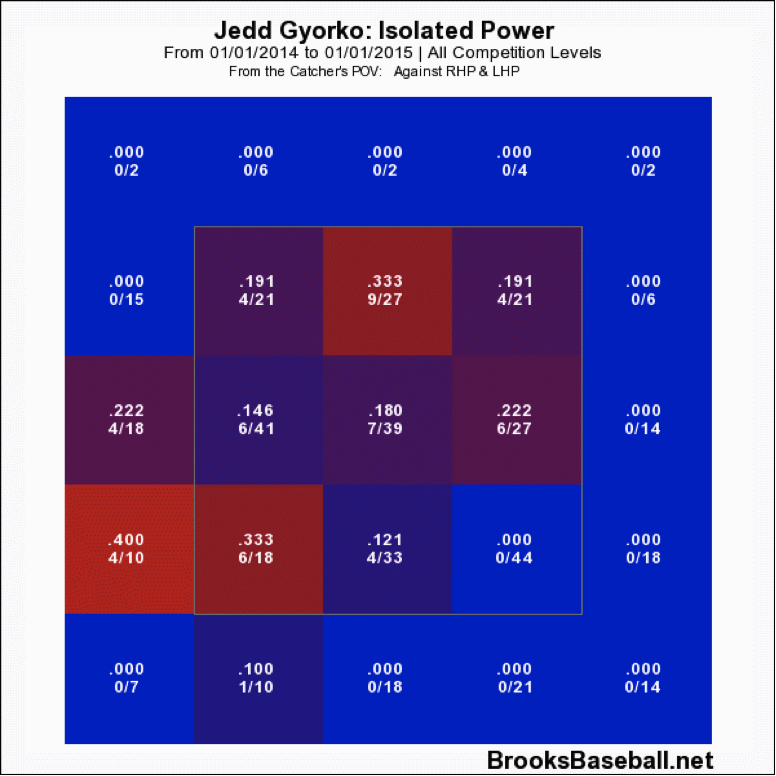 While that doesn’t look particularly putrid, check out the difference from his ‘13 heat map: 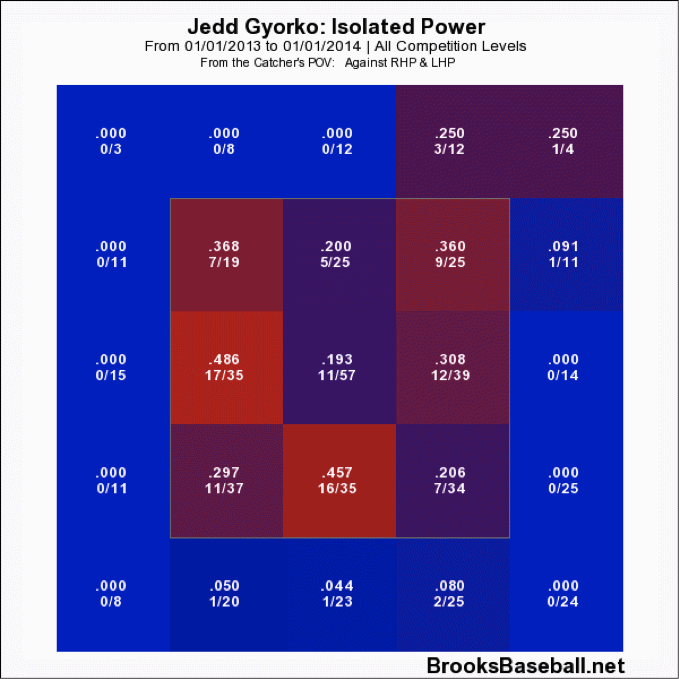 Gyorko crushed the baseball on the inner half in 2013. Furthermore, he was able to take pitches up-and-away and hit for power. While the latter still declined a bit, the most notable dropoff happened on the inner half. Lefties, for example, pounded him on the inner half and held him to a .215 batting average on fastballs with a .077 ISO. Gyorko has to adjust.

I’m sympathetic to his extensive track record in the minors and his past power production in the majors; however, he’s currently going ahead of Rougned Odor, Brandon Phillips, Scooter Gennett, and Aaron Hill. I’m not willing to gamble that Gyorko’s limitations last year were a fluke or will somehow be solved, just because it’s a new season. Hell, if I needed a low-average, high-power guy at second base, I could take Jonathan Schoop 100 picks later—even with Everth Cabrera in the mix in Baltimore.

The 5-foot-10 shortstop no longer has rookie eligibility, but considering he only has 393 big-league plate appearances under his belt, he sits comfortably on this list. I wrote about him a few weeks ago, noting he could provide sneaky value. However, he was going anywhere between 16th and 20th in fantasy drafts. ESPN had him ranked 22nd. Now, according to NFBC’s average-draft position, Owings is going 15th overall amongst shortstops.

That doesn’t change my opinion about Owings’ core skill set. He could hit 10 homers with 20 stolen bases and a .260-.280 batting average. The R/RBI stats won’t be pretty, but considering the dearth of offense at the shortstop position, getting a 10/20 guy is gold in the later rounds. I like Owings. I think he’ll be underrated in fantasy drafts because he has a low walk rate and owners tend to forget that a low walk rate with a high average isn’t a negative (unless you’re playing in an OBP league, obviously). If he hits his PECOTA projections—.261 average, 11 homers, 12 stolen bases—fantasy owners will be dancing. To put it differently, I think he can be Erick Aybar, circa 2013-2014.

At 27 years old, he doesn’t feel like a post-prospect. The injury last season, though, kept him under the 300 PA mark. He effectively has a season-and-a-half of big-league experience, and the young man is a divisive player. Fantasy owners who don’t care for him see a fourth-outfielder type and point to his 2013 season, in which he hit .269 with eight homers and 12 stolen bases. Those who believe in Pollock, however, look to his blistering start to 2014 and his .302/.353/.498 slash line.

Which one is it?

I believe Pollock is more the player he was in 2013 for two reasons: (1) the power appears likely to regress, and (2) his .302 batting average was bolstered by a .344 BABIP. His ground-ball rate hovers around the 50 percent mark, and he’s not much of a line-drive hitter. Furthermore, his average-batted ball distance ranked 146th in the league in 2014, which is actually lower than his 142nd-place ranking in 2013. Neither of those suggest his lack of line drives hides a strong fly-ball distance.

He’s a solid hitter. He doesn’t swing-and-miss too often, nor does he chance many bad pitches. The walk rate is acceptable. Pollock will also steal double-digit bases, which is obviously helpful in fantasy leagues. It’s just important that fantasy owners aren’t expecting more than what Pollock can provide. He’s currently going just behind Melky Cabrera and Wil Myers in drafts. There’s a large gap between Cabrera/Myers and Pollock for me.

Mejia has been on the prospecting scene for ages, but injuries have largely kept him from getting a chance at the major-league level. He finally cracked the 50-inning plateau last year. He saved 28 games, struck out more than a batter per inning, and posted a decent 3.65 ERA. Not to mention his hair is elite on its own.

Two questions surround Mejia this season: (1) will he close, and if so, (2) can he throw enough strikes to be more than a back-end closing option for fantasy owners.

The closing question is hard for obvious reasons. The team has suggested Bobby Parnell is the leading candidate and it’s his job to lost this spring. That doesn’t bode well, especially in a bullpen that possesses other closing options, such as Vic Black and Jeurys Familia. If he does close, though, he’s a bottom tier closer. He walks too many batters and doesn’t back it up with an elite strikeout rate. The 23.5 percent strikeout rate is nice, but his 10.7 swinging-strike rate is marginally better than the 10.5 percent league-average mark. Mejia isn’t a reliever to anchor a fantasy pitching staff. If one projected a quarter of the league’s closers to lose their jobs by the end of the year, Mejia would be one of the first I would point to.

To be anything more than a back-end closing option, a guy has to do something special. He doesn’t limit runs, miss enough bats, or avoid the free passes enough to be special. Fantasy teams need elite relievers. I’m afraid he’s just a late-round flyer for those owners chasing saves.

You need to be logged in to comment. Login or Subscribe
huztlers
Interesting to read something where everyone is not touted as a breakout. Well done.
Reply to huztlers
SJLedet
Ha, I have Owings and his comp, "I think he can be Erick Aybar, circa 2013-2014" in one my leagues. Can likely only keep one. Luckily, they're only $2 and $1 respectively. Decisions, decisions!
Reply to SJLedet
markpadden
"Cingrani has never been good against righties."

Never? In 223 IP in the minors, his FIP was 1.72 vs. righties and 2.94 vs. lefties. Yes, it's the minors, but that's a massive *reverse* platoon split -- pretty rare for any LHP over 200+ IP. Considering he hasn't even logged 200 IP in the majors, it may be a bit premature to label him a LOOGY in the making.
Reply to markpadden