Kevin Whitaker never met a school assignment he couldn’t turn into something baseball-related. His research on the MLB Draft was published at the 2013 Sloan Sports Analytics Conference and adapted into the article below, and he writes about college basketball at Beanpot Hoops. Follow him on Twitter at @whitakk.

Two of the top left-handed pitchers available in tonight’s MLB Draft, Sean Newcomb and Kyle Freeland, will represent colleges whose names are not usually announced on Day One. Newcomb, a late-rising junior projected at no. 7 in Perfect Game’s mock draft, will be the first University of Hartford draftee since 2004. Freeland, slotted one spot behind Newcomb, hails from Evansville, which hasn’t produced a first-round pick in 25 years.

If history is any indication, however, those two stars may not be the only players drafted from their colleges this weekend. Scores of scouts flocked to the southpaws’ starts throughout the spring, but Newcomb and Freeland weren’t pitching in a vacuum; they played alongside the other Hawks and Purple Aces, many of whom have their own dreams of playing professionally. Although they weren’t the main attraction, these teammates still had opportunities to impress scouts and cross-checkers, giving them a leg up when major-league clubs choose from hundreds of long shots near the end of the draft.

Freeland’s coach, Wes Carroll, knows the benefits of having a superstar teammate firsthand. As a senior shortstop for Evansville in 2001, he had frequent exposure to scouts while playing alongside second-round draft pick Preston Larrison. Four Aces in total were drafted that summer, including Carroll in the 37th round.

This year, Evansville players who could follow in their coach’s footsteps include the team’s leading hitters, catcher Kyle Pollock and center fielder Kevin Kaczmarski. When their good games came during Freeland’s well-attended starts, Carroll says, “There’s no doubt more questions came my way.”

Hartford coach Justin Blood has also had a firsthand look at the exposure generated by top college prospects. He was a pitching coach at UConn in 2011, when first-round talents George Springer and Matt Barnes drew dozens of scouts to the cold Connecticut spring; a program-record 10 Huskies were drafted that year. According to Blood, this attention particularly helps players who demonstrate consistency—including, perhaps Hartford catcher James Alfonso, or pitcher Brian Hunter, who often followed Newcomb in double-headers.

How big is the “coattail effect” of top prospects?
Because the value of picks declines steeply throughout the draft, it is rational for teams to spend most of their resources optimizing their first few selections. With relatively little at stake in the late rounds, teams may favor players with whom they are already familiar, including teammates of top prospects. This can be described as a “coattail effect,” a term adapted from political science. In politics, a strong presidential candidate will turn out more voters, who may also vote for his partisan “teammates” in down-ballot elections; in baseball, a star prospect attracts more scouts, who will see his teammates and may recommend drafting them in later rounds.

To test this theory, I analyzed 25 years of draft data from 1987-2011, obtained from Baseball Reference’s database. Only players drafted from four-year colleges were included; I expect that the effect holds at all levels, but it’s likely harder to see in high-school data, because players are spread thinner across many more schools and because much high-school scouting happens at showcase events anyway.

In those 25 drafts, 16,005 players were selected from 851 different four-year colleges. I separated these into “top prospects”—defined as players drafted in the top five rounds—and all other draftees, who are the players assumed to benefit from the coattail effect.

Because players self-select onto college teams, however, the strength of baseball programs is a major confounding factor. Louisiana State is more likely to have a top prospect than Louisiana College, and the former also has more players capable of being drafted in late rounds. I account for this bias by using a panel data regression with fixed effects, which compares the number of teammates drafted from a school when a top prospect is drafted to the number players drafted from the same school in all other years.

The regression output is shown below (standard errors in parentheses): 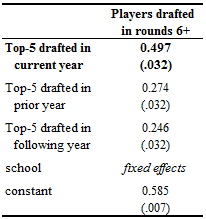 When a college player is drafted in the top five rounds, an estimated .50 extra teammates are drafted from his school (not counting the top prospect himself). This result is statistically significant at the p<.001 level, and it is substantial in a practical sense as well—across the entire sample, an average of .66 players per year were drafted from each school, so the coattail effect nearly doubles the number of expected draftees.

If there is a coattail effect for players drafted in the same year as a top prospect, you might expect the same pattern to carry over into other years—evaluators may spot draft-eligible teammates while scouting a top underclassman for future drafts, or they may remember overlooked freshmen or sophomores they found while scouting top prospects in prior years. Indeed, the coattail effect appears to carry over into other years at a diminished rate: About .25 additional players are drafted from a school one year before or after a top prospect is selected.

And although the proliferation of independent scouting services and video might seem to give players new means of exposure, the coattail effect isn’t going away anytime soon. In fact, it has been slightly stronger in recent seasons. “I think it comes down to players you see in person,” one area scout says. “If you’re in a position where I can see you, there’s a greater chance that I have interest in you.”

Does the “coattail effect” create inefficiencies in the draft?
In theory, a team’s goal in each round of the draft is to pick the most talented player still available (or, more precisely, the one who will provide the most value above his expected signing bonus). However, we have seen that clubs are more likely to draft teammates of top prospects. Thus, players of similar talent who do not have star teammates may be undervalued (drafted in later rounds or not drafted at all), and if so, this class of players should yield higher returns relative to draft position.

On the other hand, teams have a limited set of scouting resources, especially for late-round players. From this viewpoint, it might be advantageous for clubs to favor teammates of top prospects because they have better information about such players, having already seen them play several times.

The following regressions measure the value of draft picks in two ways: first, by whether or not they play a game in the major leagues; and second, by their career Wins Above Replacement (per Baseball Reference). As in Rany Jazayerli’s analysis on age and the draft, the baseline value for each pick is assumed to be a function of 1/SQRT[Pick #]. If teammates of top prospects are overvalued, they should perform worse relative to their pick number than other players. (Only four-year college players drafted after the fifth round are included.)

Instead, players who benefit from the coattail effect are actually more likely to reach the major leagues, relative to their draft position, though the estimated effect is only marginally significant (p = .08) and not very substantial (about a one-percentage point increase). (Technically speaking, a linear regression is not the best way to model a binary outcome such as the probability of reaching the majors, but a logistic regression yields nearly the same estimated effect and significance.) By WAR, “coattail” players do not return significantly more or less value than all others.

At the very least, there is not yet any evidence that the coattail effect leads to inefficient draft choices. With no clear downside, teams will likely keep drafting teammates of top prospects — and those teammates are very much aware of that possibility. “Scouts stick out like sore thumbs, and you're gonna know if it's a big crowd,” Carroll said. “There’s some added pressure, but it’s also a confidence booster. It's an opportunity.”

You need to be logged in to comment. Login or Subscribe
psugator01
find the school near you with a top prospect so you can get 'seen' by the scouts
Reply to psugator01
mdthomp
A good example of this is Greg Garcia. The Cardinals saw him when they were scouting Kolten Wong.
Reply to mdthomp
jpaternostro
Alternatively, you could also play with the son of a team's farm director, that is how Daniel Murphy got drafted.
Reply to jpaternostro
walrus0909
Dirk Hayhurst agrees:
"For the amateur player hoping to get noticed, it can be a bitter pill to swallow when you find yourself in a game with a super prospect being treated like royalty by all manner of pro-labeled, radar gun-toting henchmen. But you swallow that pill because you want to play in a game with that kid -- he's your ticket to a free audition."