Back in the fall of 2007, I was sitting with a few scouts and various team officials at an instructional league game, and I was open-eared to some their criticism of the scouting and player development coverage found on the internet. Specific to my work at the time, the Rangers prospect content I was producing offered very little substance to anybody outside of casual minor league fans, and the opinions I put forth on my boutique site weren’t taken seriously by the industry. I always wanted to write scouting reports—the kind of reports that my heroes in the stands would construct and submit, the kind of reports that offered far more significance than the surface player interviews or simple field observations I was producing. But I lacked the necessary skill-set to pull off such a scouting endeavor, so I chose not to fake it and continued with the primitive prospect work I was familiar and comfortable with.

Fast-forward a year and those backfield criticisms of my work still hung around my neck like a noose of inadequacy, and I wanted to prove to myself and to others that I could identify talent on a field and document those findings to an audience. With the help of the same scouts that had chopped me in half the previous year, I started to produce scouting-scale reports on the prospects I was watching on the backfields, first sending them to industry sources to stand on their firing line and then dropping them on the readers of my site. I was sashimi-level raw and over my head with the proper application of the scale and the terminology involved, but I had found my true passion in life, and I knew how I wanted to sculpt and deliver minor league content going forward.

In my first year at the helm of prospect content at Baseball Prospectus, I was finally in a position to implement my long-held objectives, a scouting-heavy approach that was based on eyewitness views and delivered in an esoteric industry style, free from common narratives and mass-audience tailoring. I wanted to put a network of eyes on the prospect prizes and produce quality scouting reports that would offer more substance and significance on the scouting front than anything else previously offered on the internet. We had grand plans built on modest means, and the original eyewitness series that first appeared during the 2013 season only scratched the surface of our intent and ultimate design. The reports were rudimentary and aesthetically dull, basic word documents that weren’t user-friendly, reader-friendly, or easy to navigate, sort, search, or store. The scouting itself was sound, but the structure left a lot to be desired, and we were far from satisfied with the overall product.

Thanks to the pressure and perseverance of Baseball Prospectus President Joe Hamrahi, a new technological approach was made a priority for 2014, and the eyewitness series received special treatment on that front. Along with Dave Pease and database wizard Tim Collins, we slowly chiseled the amorphous block of content from 2013 into a well-defined body made of bronze, an ongoing project that I’m proud to tease you with today.

As of last week, each member of the Baseball Prospectus Prospect Team has access to a specifically designed internal scouting editor, where applicable players can be selected, report templates created, filled out, and submitted for approval. My job just got cooler than words can express, as I get to read over each submitted report, go over the grades and conclusions with the evaluator in question and then clear each report for HTML generation. After each report is generated, we will have the flexibility to link to these reports as stand-alone articles, to place individual links on social media platforms, and to link the reports directly to the existing player cards on the site for easy access and reference. 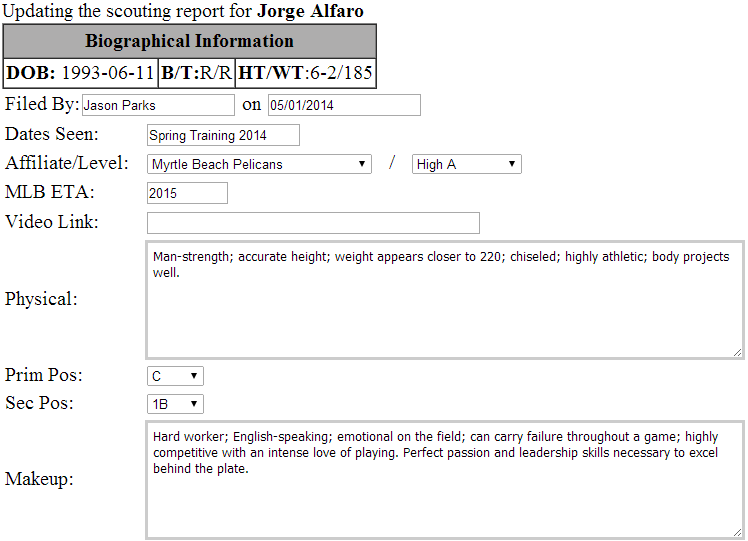 Going forward, every scouting report created for this series will be in front of our paywall and free to all comers. The bulk of our non-Eyewitness Acccount prospect content will remain subscription-based and will be even more enhanced as we add sophistication to our product, but due to the specific nature of the reports and upcoming projects using the scouting information, you will be able to read every report we write during the 2014 season without paying for the service. For current non-subscribers, it’s our hope that these reports drive you deeper into the Baseball Prospectus community and encourage you to sign up with us long term, and for current subscribers, we hope this fortifies your investment in our services and keeps you on board for the foreseeable future.

Our scouting process has been documented in the past, but I will relay it again for the introduction of this series. We have talent evaluators spread out over talent-rich environments throughout the country and will try to put eyes on as many prospects of note as possible. We won’t pretend that our work stands above the scouts we have the privilege of sitting with, but after sending four staff members into industry scouting positions in the last year alone, we feel confident in our ability to recognize and document the talent that we see, and that the reports we create are up the standards set by those on the inside of the game. We aren’t interested in being weekend warriors, sitting on a game and then making bold proclamations about players, throwing around grades like it’s a bar hobby like darts or alcohol poisoning. We have very specific standards when it comes to writing reports, and anything less than those standards will not find a home on our site.

Before a report can be filed on a position player, a minimum of 10 at-bats and two pre-game looks (batting practice/fielding) is required, and a full series of games is preferred. Games will be evaluated cover-to-cover, regardless of the talent on the field and circumstances involved, as we won’t fall victim to big-game hunting and just writing up the names you know—we will also be writing up the names you don’t know, the role 4 types who populate the minor leagues.

On the pitching side, the sample size requirements will obviously shrink depending on the quality of the look, but we will accurately document the velocity reading from vantage points behind home plate, the arm slots, and other mechanical distinctions of note, and this will be true if it’s a two-inning pop from a reliever or a seven-inning look from a starter. If we file a report on a prospect, you will know that our intent was to evaluate that prospect to the best of our ability, with opinions formed in an honest manner, and not just to be seen at the fields or to play scouting sensationalists to generate interest in the product.

In the coming weeks and months, we will be adding to our capabilities with this endeavor, creating a searchable database using scouting classifications to identify similar prospects, using older reports to highlight developmental progress, and eventually putting the entire package together in order to make Baseball Prospectus your one-stop shop for all things scouting and player development. While we continue to develop this project to its potential, please allow me to tease you with these scouting reports, the likes of which will soon be found on the site in great abundance.

You need to be logged in to comment. Login or Subscribe
teddywolvesevelt
Today was a good day, sayeth Cube.
Reply to teddywolvesevelt
Rockshu
This is borderline orgasmic.
Reply to Rockshu
DWrek5
I share the same sentiment as the 1st 2 commenters, just not creative!
Reply to DWrek5
hegglund
Excuse me for a second; I need to get the lotion.
Reply to hegglund
ChrisHopcroft
Put the lotion in the basket
Reply to ChrisHopcroft
Digitalbob
Love your work, BP team!
Reply to Digitalbob
speedchaser9
Game changer.
Reply to speedchaser9
Muboshgu
Excellent progress! This series was useful last year, and I'm glad to see it taking a step forward.
Reply to Muboshgu
kozysnacker
I'm not sure if it germane to this post, but how often do catching prospects fail due to the language barrier? Do you know of any specific guys?
Reply to kozysnacker
jparks77
Being able to communicate with the pitcher is paramount, but some can make it work without a shared language fluency. That said, its always a positive developmental attribute when a catcher can learn to communicate in both Spanish and English, and this is true of all catchers, not just Latin American born players. I can think of numerous catchers that received below-average marks for their communication skills, but it didn't prevent them from performing their other duties behind the plate.
Reply to jparks77
jalee121
::Opens wallet:: Here, just take my money. All of it.

(And yes I realize this feature is free for the most part, but it's reason number 5467984648794546 why I will continue to subscribe.)
Reply to jalee121
joechris96
Thank you. We really appreciate it.
Reply to joechris96
jparks77
haha. Awesome. Many thanks
Reply to jparks77
kcheaden
As someone that has subscribed to Baseball America for 20 years and BP since day one, I'd like to say that you guys are on the verge of overtaking them on the prospect front. They still have the edge just due to the sheer volume of prospects they cover but in terms of quality the edge goes to you guys. Every year you up your game. Kudos.
Reply to kcheaden
danrnelson
This is incredible and awesome. I think these reports should be sponsored "Brought to you by Lubriderm."
Reply to danrnelson
bumphadley
Bath time.
Reply to bumphadley
SaberTJ
This announcement nearly leaves me speechless. Can't wait to see where this goes.
Reply to SaberTJ