Earlier this week we got our first look from a pitch tracking system at Mark Appel, the first overall selection in the 2013 draft and one of Houston’s (and baseball’s) top prospects. The data come from a preseason exhibition contest that was played on the final day of spring training—but because it was played in Houston, and because the PITCHf/x cameras were operational and outputting information, we got some stats to supplement the scouting reports we’ve read.

Appel showed three pitch types: a fastball that ranged from 92-97 mph, a slider/slurve at 86 mph, and an 84 mph changeup with decent fading action. [These data have been reclassified by Pitch Info / Harry Pavlidis and corrected to account for systematic biases in Houston’s PITCHf/x system, and velocities have been slightly increased to reflect a 55’ release point]. 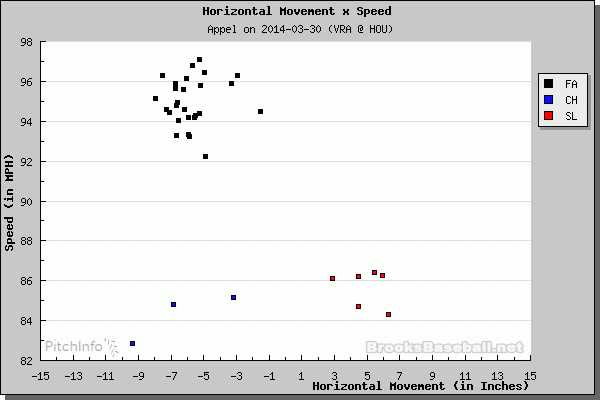 One notable aspect of the outing was how jazzed Appel was to start the game: 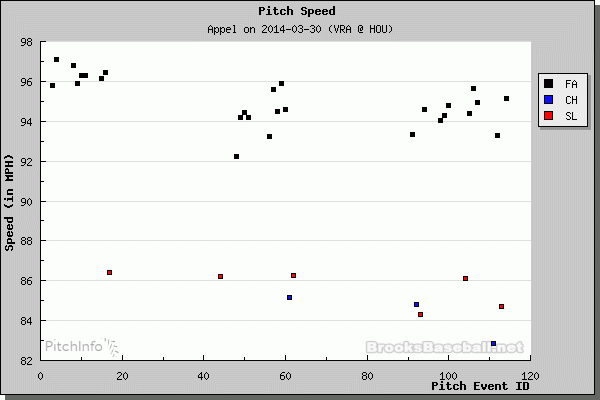 This plot, which shows velocity as a function of Event ID (every pitch/pickoff play/etc. for either team is an event) shows that in the first inning (on the left side of the graph), Appel came in throwing nothing but 96-plus mph heat (and one slider). By the third inning, he had backed off considerably, sitting more at 94-95. Hard to say if the first-inning jump was because he was finally excited about getting PITCHf/x data and really wanted to impress us all, or if it was just because he was pumped to be pitching in a big-league stadium.

Pretty strong stuff from the kid in our first look. It will be interesting to see what changes by the time we see him next.

The overview of Appel’s data can be found here, with pitch plots and inning-by-inning breakdowns here.