Because you enjoyed the inaugural Baseball Prospectus Futures Guide so much, we decided to publish another similarly named volume this year. 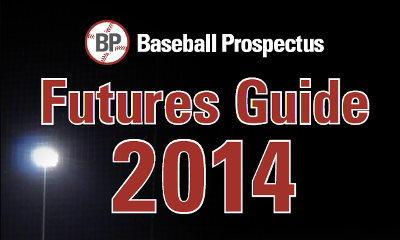 The Baseball Prospectus Futures Guide 2014 is built around the best of Jason Parks and the BP prospect staff's preseason Premium prospect material and is full of prospect goodness. It's like the Futures Guide 2013, but with even more stuff:

How to Get It
Futures Guide 2014 will be available in paperback and e-book formats next week. We will have more information then.

You need to be logged in to comment. Login or Subscribe
Rockshu
Okay, yeah, I want this.
Reply to Rockshu
andtinez
I have a better idea for the cover. A little dated, but still gets the point across. https://pbs.twimg.com/media/BSh6_QWCQAAiiR8.jpg:large
Reply to andtinez
UTRMHefferan
Will you again offer the guide through Amazon Kindle?
Reply to UTRMHefferan
dpease
Yes we will. You can buy it from us directly or it will be available on Amazon. Thanks.
Reply to dpease
sam19041
Hope you'll have it before opening day!
Reply to sam19041
kolbotn
Which day exactly? About to start dynasty minor league draft. Need this book asap! Haha. But seriously - which day next week?

Reply to kolbotn
dpease
We'd have told you which day if we knew! But we're going to get it done asap.
Reply to dpease
dpease
Futures Guide 2014 is now available! You can click the linked book name, or visit the front page and click the left sidebar to get to Amazon. Thanks for your patience.
Reply to dpease
MaineSkin
#BPTakeover
Reply to MaineSkin
hannibal76
A great idea. As I said last year, I would buy this in a heart beat if it included UPSIDE/10-year projections and was released before March 1st (i.e., before most fantasy drafts).
Reply to hannibal76
kcheaden
This looks like a great product and I'd buy it except that all fantasy drafts will be done by the time it's released. A better time frame for next year would be the beginning of March.
Reply to kcheaden
dpease
We're a month and a half ahead of where we were last year for this book and we hope to continue improving our timetable. Thanks.
Reply to dpease