Welcome to the inaugural post of Feature Focus! We've spent years building useful baseball products, and we've found that some readers and subscribers are unaware of some of the many great offerings available at Baseball Prospectus. In this series, we'll be highlighting some of those features as a reminder of what you may have been missing. We're kicking things off with a fairly new addition to the site: Prospect Tracker, which gives BP users a convenient method of monitoring the progress and performance of baseball's top prospects.

Prospect Tracker was announced early in 2012, and some new features were added this season to make it even more powerful.

The screenshots above are taken from the 2012 top 101 prospect lists. If you go to the Prospect Tracker page, you'll see leaders (across all levels) in various stats: 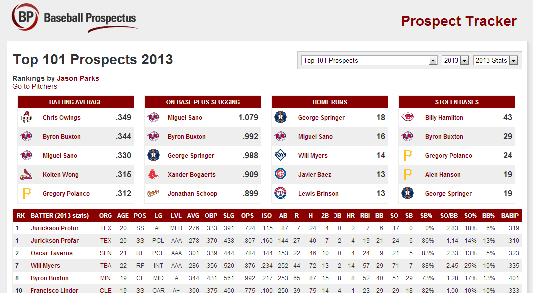 Also available are each team's top 10 list from 2013 (and all previous years): 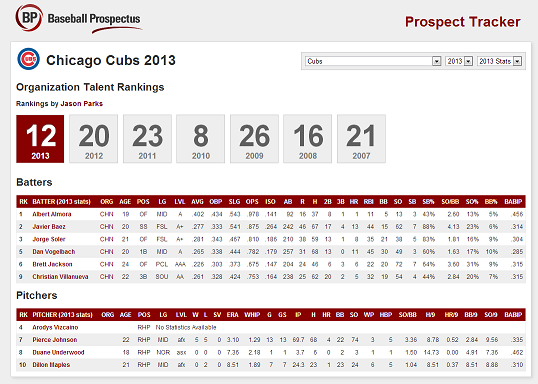 Further, for those with teams in dynasty league formats (or who just like following a set group of players), Team Tracker teams are now available. Just select them from the dropdown menu when logged in: 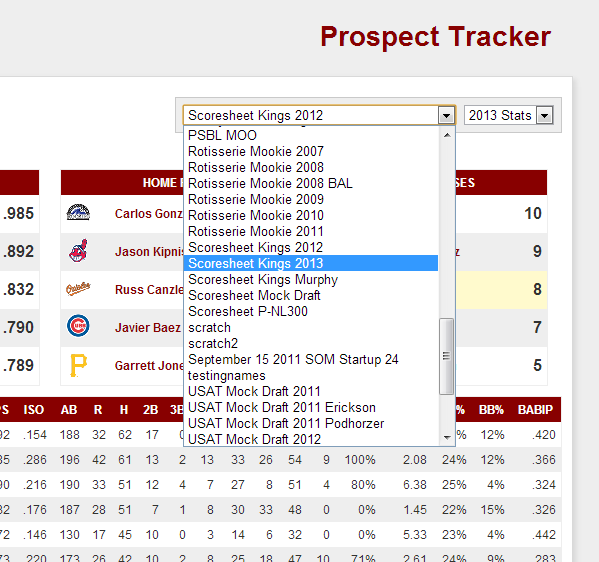 The clean-up hitter of Prospect Tracker features, though, has to be the ability to look at any season's stats for any group of prospects. Simply select the year of prospect rankings in one menu, and then the year of stats in the other menu: 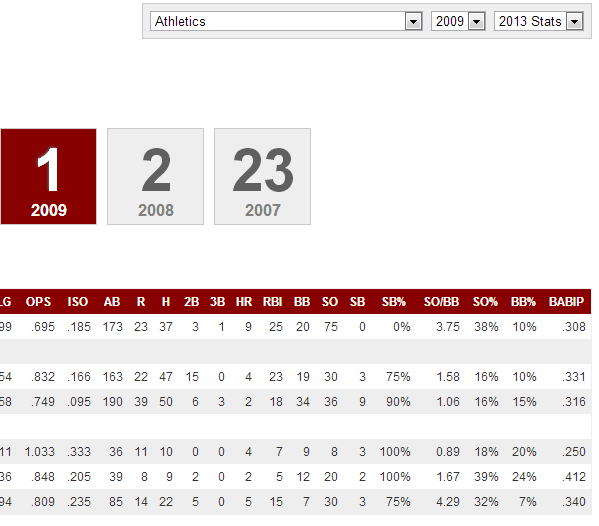 That's a quick walkthrough of Prospect Tracker, which really could be called "Prospect Tracker and Team Tracker for Minor-League Stats." Whatever alias it takes, readers have made it popular. If you haven't been aware of it until now, we hope you'll check it out and incorporate it into your regular BP routine. You can access Prospect Tracker through this link and through the dropdown menu accessible by mousing over the "Prospects" navbar button at the top of any BP page.

You need to be logged in to comment. Login or Subscribe
boards
Does it only include those players in the Top 101?
Reply to boards
mcquown
The team pages include all the top-10 or top-11 players ranked, not just the ones in the Top 101. And, obviously, the Team Tracker pages include whoever you choose.
Reply to mcquown
Clooch14
I got kind of excited about this because trying to track your minor leaguers on Firstinning.com can be hit or miss. I loaded up all my prospects in the team tracker but it appears to show only MLB results and not MiLB results. Amy I doing something wrong or does the Team Tracker only cover major league stats?

If so, any chance that BP can include minor league stats in the future? It seems to me that you can track your major league players pretty much anywhere but tracking minor leaguers is a bit trickier. The only place I've found to be able to track just the minor leaguers you want to track is firstinning.com and that site is pretty unreliable.
Reply to Clooch14
mcquown
Thanks for the good suggestions.

Right now, we don't have plans to put MiLB players into Team Tracker, but - as noted above - you should be able to see season totals for ALL your Team Tracker guys using the Prospect Tracker! For instance, I just pulled up my Scoresheet team and see that Tyler Austin is slugging a disappointing .396 in AA this season.

You can also see your (MiLB or MLB) season splits on your Team Tracker players, if that's of interest to you, on the sortables reports (which also have a Team Tracker team selector pulldown).

Team Tracker takes a while to generate the "past N days" stats - perhaps if there's enough response from people requesting that data, we could add it in the future, but for now, you can use Prospect Tracker to get season totals.

Reply to mcquown
mcquown
I should clarify my first line - of COURSE you can add your MiLB players in Team Tracker (over 9000 players are available, and you can always request us to add more names to the menus if you don't see someone you want to track), we just have no plans to make the Team Tracker interface display their stats for the reasons I mentioned.
Reply to mcquown
randolph3030
It is very possible that I'm just blind, but it appears that Taijuan Walker isn't appearing in the 101 Prospects - he was ranked 9th but doesn't show up in the Top 101 stats page.

Sorry to nitpick, this is awesome. I didn't realize it was so cool, thanks for bringing my attention to it.

Reply to randolph3030
dianagramr
Trying to load/add my team from my scoresheet league, and it just keeps cycling back to the same page, with no team loaded. :-(
Reply to dianagramr
paulfrancke
Right, no Taijuan Walker. He should be around 2nd or 3rd in ERA and WHIP.
Reply to paulfrancke
teaaker
So you have to add / remove MiLB players under "Team Tracker" and then look at their stats under "Prospect Tracker"? Several of my pitchers are not showing up under my team name in the prospect tracker tool, even though they are within my team tracker tool.

I also don't see any stats at all under the Team Tracker tool...
Reply to teaaker
teaaker
Just saw this note, "Data Updated Through Batters: June 18, 2013, Pitchers are currently undergoing maintenance" so maybe that's the variable. I'll check later. Thanks for the article, excited to start using the tool!
Reply to teaaker
joechris96
Yes...sorry...we needed to make a repair to speed up some data processing. We should be back to normal on Thursday. Rob will respond once everything is updated. Thanks!
Reply to joechris96
mcquown
I fixed the missing Taijuan Walker problem. Sorry for the inconvenience.
Reply to mcquown
randolph3030
Taijuan has gone missing again. It's not an inconvenience, just thought that you'd like to know. It's really no big deal.
Reply to randolph3030
mcquown
All fixed, sorry for the inconvenience.
Reply to mcquown
randolph3030
STOP APOLOGIZING ROB! It's totally fine.

Have you ever seen the Louis CK bit about the guy in the seat next to him who gets pissed when the wi-fi on their plane doesn't work? Everything is Amazing & Nobody's Happy.

This is amazing and I'm totally happy! I swear!