The projected Super Two window closes in the coming weeks, marking a joyous occasion. In addition to freeing mindful teams to promote their top prospects, it allows fans to enjoy the young talents and mad season the whole mess entails. Any injury, stretch of poor play, off day, or in-game removal is grounds for promotion chatter—especially when it involves top prospects like Zack Wheeler or Wil Myers. Another well-regarded prospect deserving high-alert status is Oscar Taveras—known as OSCAR around these parts.

On the surface Taveras, who is currently on the disabled list with a sprained ankle, faces an easier path to the majors than Wheeler and Myers do. Unlike Wheeler's Mets, Taveras' Cardinals are competitive, and unlike the players in front of Myers, those in front of Taveras are underperforming. Taken together those variables would point toward a promotion in the near future—except there's a reasonable chance Taveras may not see the majors anytime soon.

The holdup starts with the aforementioned player ahead of Taveras on the depth chart: Jon Jay. Depending on the defensive evaluation Jay falls somewhere between an okay and a good player. He's older than his service time suggests, having gone to college and then spent parts of five seasons in the minors. Yet Jay might be a better hitter than his once-meager prospect status suggests. He entered the 2012 season with a career .300/.359/.414 line. Not bad for a flexible outfield defender under control through the 2016 season.

Unfortunately for Jay, and the Cardinals, his early-season struggles have caused wandering eyes. At the start of play on Tuesday, Jay's line sat at .241/.316/.347, thanks in large part to a poor April (.213/.293/.337). Manager Mike Matheny did something natural by moving Jay down in the lineup, from the top spot to the sixth or seventh slot depending on the day. But hitting coach John Mabry took an unusual approach to fixing a career .300 hitter coming off a bad month: he overhauled Jay's mechanics. 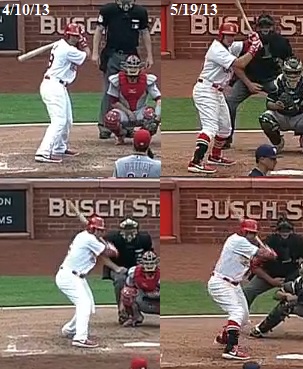 Jay's pre-swing setup has always included a lot of moving parts. He'd rest the bat on his shoulder, where it teetered up and down, before he'd form a circle with his hands by bringing them down to his belly button and then back up back his head. These changes have altered his original hand placement, the style of bat waggle employed, and the hand movement leading into his load. He still moves his hands before the load, but now his hands don't go below his chest. The second frames of those images are almost identical, so this is about what happens before that point. The idea is, presumably, to help Jay get into his hitting position quicker.

A return to form in May suggests the changes have helped, or at least not harmed Jay's ability to play like his old self. That's good news for the Cardinals in more ways than one. Changing a batter's mechanics in-season is dangerous business, especially when the batter has as much success to his name as Jay does. It took guts for both parties to go along with these changes. If the conviction pays off and Jay is back to hitting then that'll alleviate some of the pressure to recall Taveras. But there's an aspect independent of Jay worth mentioning, and that's how the Cardinals go about their player development.

Part of what makes the Cardinals interesting is their self-sufficiency. A recent article by the Pittsburgh Tribune-Review noted eight of St. Louis' 25 active players were drafted by the team since 2008, the highest percentage in the National League Central by a reasonable chunk. The Cardinals' seemingly evergreen farm system has helped them overcome a slew of setbacks and hurdles. Keep in mind that since the end of the 2012 season the Cardinals have not seen their longtime staff anchor, closer, or shortstop play in a regular-season game. They lost their rotation's leader in wins, ERA, innings, and strikeout-to-walk ratio to free agency, and their top set-up man to ineffectiveness. Through it all St. Louis owns the best record in baseball.

Naturally the Cardinals' ability to find and develop talent receives credit. To make this into a farm analogy: St. Louis knows what kinds of seeds to acquire, where and how to plant and nurture those seeds, and when to pluck the finished product from the vine. The last part is minimized in relation to the other two areas, but the Cardinals do a bang-up job of letting their players develop before pushing them into action. Consider the key homegrown position players and how many games they spent in Triple-A through the season in which they played in their 50th big-league game (this is an admittedly arbitrary number, used only to separate spot duty from a prolonged stay in the majors):

A season in Triple-A typically lasts around 140 games, depending on rain-outs and the like. Taveras is at 31 games now. There are two caveats worth mentioning, however. One is how the aforementioned ankle injury suppresses Taveras' total by a few. The other is how Taveras is on another plane as a prospect than those listed—they were commercial passengers, he's piloting a G6—and as such a quicker arrival is expected.

Still, it wouldn't be a surprise if the organization's internal plan has Taveras becoming a full-time presence in the lineup beginning next season. Combined with Carlos Beltran's expiring contract, the Cardinals could move Jay to a corner in favor of Taveras without alienating a productive player who has helped them win in the past and should continue to help them win in the future. Decision making is one of the Cardinals' strengths, so it's hard to see them doing anything rash when it comes to Jay or Taveras—even if it means missing out on the post-Super Two fun.

You need to be logged in to comment. Login or Subscribe
Turn2Tribune
Is it pretty set in stone that Taveras will stay in center long term? Not being too informed on the Cards, I saw him in center as a way to get in the lineup, then going back to right when Beltran is gone. Does Jay profile better to the corner OF spot?
Reply to Turn2Tribune
KJOKBASEBALL
Most of the Cardinal talk has Jay staying in Center with Taveras in Right Field long-term.

Reply to KJOKBASEBALL
salvomania
If Jay continues to falter, and Taveras does get the callup and see time at center, a possible scenario would be for Alan Craig to play right if Beltran isn't resigned and to have Matt Adams at first. Adams has far more upside than anything Jay is likely to produce.

But Jay has always been extremely streaky, and although he's in the midst of a huge tailspin now, just two weeks ago, even after the poor April, he was sitting at .286/.358/.422 for the season; since then he's gone 4-for-48, and those putrid two weeks are the only reason we're having this conversation.
Reply to salvomania