The Royals and the Rangers share the facility in Surprise, while the Padres and the Mariners create cross-league harmony in Peoria. This arrangement provides a near-daily flow of data from at least one of the parks. All four host teams and their visiting foes are using plenty of pitchers in these early games. We'll take that as an opportunity to review some new arms.

At least 20 pitchers produced their first PITCHf/x data in the first week or so of games. That's a lot to choose from, so I turned to our prospect rankings and found three ranked pitchers—none from the top 101, but each in their respective team's top 10.

With the list picked, the next challenge is getting something out of the minimal data that you get in these early spring appearances. Just be glad new-arm candidate John Lamb isn't ranked; he threw one pitch that was actually recorded. It was a curveball, thanks for asking.

Let's compare the PITCHf/x sample, limited as it may be, to the scouting reports compiled by Jason Parks and our great scouting staff.

Maurer's sample includes only seven pitches, which is about 17,000 fewer than some of the pitchers we have in the database. We'll do what we can.

PITCHf/x shows a relatively low, three-quarter arm slot. The righty is 6-foot-5, so he's still able to get tilt from that angle, turning the delivery into an asset.

The “effort” applies here, as Maurer's outing was short. His four-seam fastball was 95-96 mph, and his sinker came in a couple of ticks below that. Once again, the arm slot comes into play: His four-seam runs with a little sink and his two-seam shows enhanced movement with a few inches of added sink.

“Slider flashes plus with sharp slice”

He threw one (85 mph) that didn't have slice, but it did show nice depth. There are two caveats to keep in mind here. PITCHf/x and sliders can be a little funny—with the wrinkles being spin axis and camera orientation—and, again, the arm angle factors in. The “slice” may be an effect of the tilt and angle generated by Maurer's size and delivery.

None in the sample, so we’ll need to wait and see.

“Changeup can get firm”

Just one here, but it was a hair above his slider speed at 86 mph. That's not too firm, but this sample is insufficient to gauge that aspect of the report. In this case, he's roughly eight mph under fastball speed, which is just fine.

Moving down the coast to the first of a pair of Angels, Alvarez brings 11 PITCHf/x dots to the matrix.

“Fastball works 94+; can touch 97+; creates good angle on the offering; shows impressive late life … plus-plus fastball that can work in the mid-90s with wiggle and a two-plane slide”

We've got 10 fastballs in the 11-pitch sample, so it's appropriate that most of the scouting notes address it.

Alvarez averaged 96.6 mph with his heater. It doesn't drop very much, despite his armslot not being particularly upright (look at the shoulder angle above). The fastball is a bit like Maurer's, in terms of arm-side, run but with a few inches of hop to it.

“Slider flashes plus; thrown with good velocity and can achieve depth”

The breaking pitch Alvarez threw had more of a curveball velocity (78) and a ton of depth, to go with two-plane movement. I'm guessing this is not the pitch mentioned in the scouting notes. It's just one offering, but I'm intrigued.

After those rather meager data pools, here, we get 21 pitches! Sappington is ranked below Alvarez, but he is also further down the Angels system and has a chance to remain a starter. 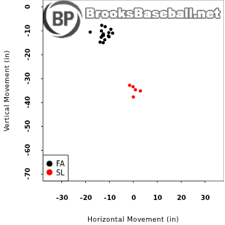 “Fastball will work from low-mid 90s”

This was true for Sappington's outing, as his hard stuff came in at 95.6 mph. The action on the ball is in between Maurer's and Alvarez's. Not as much sink or run as Maurer’s shows, not as much hop as Alvarez’s enjoys. The trio all scored well on their fastballs, with Maurer's 6+ being outpaced only slightly by the 7 assigned to both Alvarez and Sappington.

Sappington threw five sliders, averaging just under 86 mph. The pitch is a little shorter than Maurer's, but overall, it has the same scouting score (5+).

“Changeup could be average offering with more work”

Well, he better get on that, since he didn't throw anything but fastballs and sliders in our snapshot.

You need to be logged in to comment. Login or Subscribe
sahmed
Plus plus article (including format).
Reply to sahmed
mschieve
R.J. Alvarez's arm slot example image does not come up on the site that is linked.
Reply to mschieve
dpease
Thanks--this is fixed.
Reply to dpease