The first day of the Perfect Game World Wood Bat Championship in Jupiter, Florida was abbreviated Thursday because of Hurricane Sandy, but the initial four hours provided some highlights:

•  Eighty-five teams have converged on the 13-field complex shared by the Cardinals and Marlins, with hundreds of college coaches and about 400 scouts in attendance.

•  Touki Toussaint, a 2014 right-handed pitcher from Coral Springs (FL) Christian Academy, was impressive in his outing for the Atlanta Blue Jays. Toussaint, a 6'2" University of Miami recruit, displayed why he is among the elite prospects in his class, showcasing an athletic delivery and an easy 91-94-mph fastball with a plus curveball. 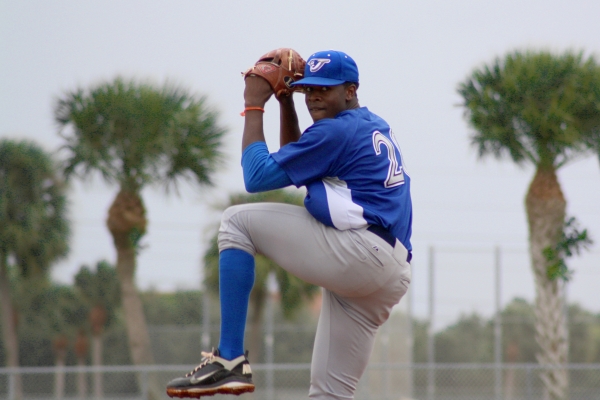 •  Tom "Flash" Gordon pitched for 21 years in the majors, but he might be remembered by this generation as the father of Dodgers shortstop Dee Gordon and his exceptionally talented younger brother, Nick Gordon, a 2014 shortstop/pitcher and left-handed hitter from Windemere, Florida. I have seen Nick, whose Olympia High School produced two high 2012 selections in RHP Walker Weichel and OF Jesse Winker, excel since he was a freshman, and he continues to improve, flashing excellent middle infield tools and fanning all three batters he faced. I predict stardom for him, and he is playing on the Cardinals Scout Team/FTB Chandler here. 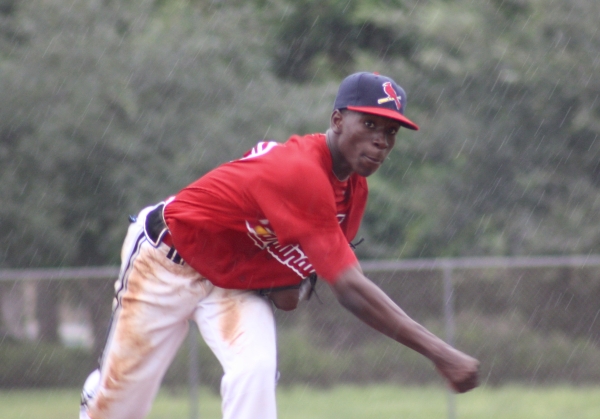 •  Mets Scout Team's Devin Williams, a 2013 RHP from Hazelwood West High School in Florissant, MO, showed plus velocity (90-93) with an above average slider at 81-82 while working from the first-base tip of the rubber. He's all legs right now, but once he adds bulk to his current 6'3" 165-pound frame, he will elevate his game. Great recruiting by the University of Missouri.

•  The Atlanta Blue Jays' Deric Boone, a switch-hitter who crushed a double to the CF wall batting from the left side, displayed a lot of athleticism. He’s a 2013 middle infielder from Atlanta, GA's Druid Hills High School.

•  I liked the Evoshield Canes’ Connor Jones, a 2013 RHP from Chesapeake VA and Great Bridge High School who’s committed to UVA. He tossed a shutout without walking a batter and hovered around 90 mph for most of the contest.

•  The highlight of the day was seeing Zach Suarez, a 2013 catcher from Austin (TX) Westlake High School, working on his swing in the cage as the final player in the complex more than an hour after the games were postponed. Suarez, a right-handed hitter with a solid 3.5 GPA, has not made a college commitment, but displayed a great work ethic as darkness covered the complex.

Hurricane Sandy will likely wreak havoc with the tournament schedule on Friday, but the system should be out of the area for the final three days, and we will be there to cover it.

You need to be logged in to comment. Login or Subscribe
chabels
Do the "teams" for which the prospects play at events like these offer any insight into their likely MLB future, or is it far to speculative for that?
Reply to chabels
DanE
The teams definitely examine the participants very closely before selecting and inviting the players, so just being with a talented group of players on a team is a positive move for a young prospect.

Playing with a highly visible team like East Cobb, Marucci Elite, Louisville Slugger, Ohio Warhawks, etc guarantees the players that he will be seen by scouts and college coaches, but it also necessitates some performance and "looking the part" since the player is exposed to so many people within the industry.

Therefore, the kids on the better-known clubs get a little bit more early attention, but MLB teams and good college coaches work all 85 teams to make sure no one slips through the cracks.
Reply to DanE