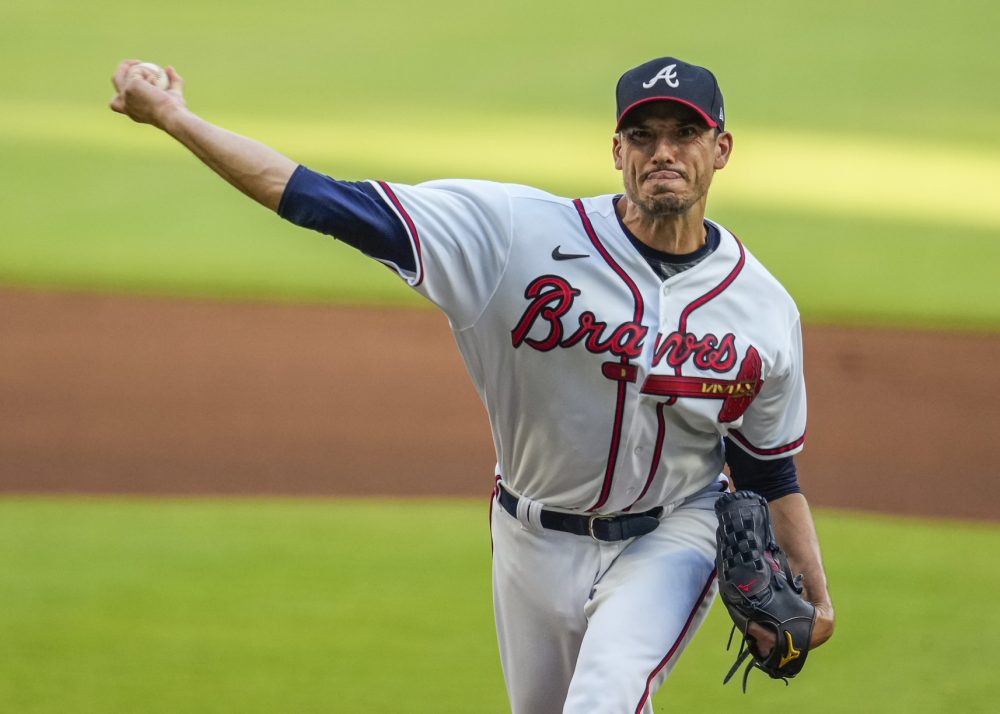 Charlie Morton’s career arc is one that has truly fascinated me. I remember reading ‘Big Data Baseball’ back in 2018, when I was still in the beginning stages learning sabermetrics and was reading pretty much any book I could get my hands on. In the book, which documents Pittsburgh’s adoption of analytics that lead to the end of its 20 year playoff drought, there are roughly 12 pages dedicated to the reinvention of the then Pirates starter.

There are a few things from those pages that stick out to me. First was that, despite what pitching failures the Pirates organization has come to be known for in recent years, they deserve the credit for, in a lot of ways, shaping Morton into the pitcher he is today. They reworked his delivery, lowered his arm slot, and helped him rediscover his sinker. He doesn’t throw the sinker as much as he used to, but Morton continues to pitch with the tools he acquired when he was there.

The second thing is that, while they did get Morton’s career back on track, they got some things wrong too, and that may have foreshadowed what was to come. Here is a passage about the conclusions drawn by Morton and the organization about his pitch arsenal in 2011.

“PITCHf/x Also told Morton an important data-based story. In 2011, his curveball wasn’t good, his changeup was a nonfactor, his cutter wasn’t cutting, and his four-seam fastball was flat.”

It is wild to me to think that at any time in Morton’s career, his curveball was not a good pitch. To be fair, he wasn’t throwing as hard back in those days, and his curveball was not the firm, sweeping pitch it is today. But while the Pirates coaches were on the right track when they lowered Morton’s release point, his career could have had a far different trajectory had they made discoveries along the lines of, say, what the Houston Astros had in mind, where they re-revived his career.

The 2018 season was the first time Morton’ curveball was his most used pitch, and he has followed that model ever since. He was a Cy Young finalist in 2019 as a member of the Tampa Bay Rays, and had another stellar 2021 season (as a 37 year old) that earned him an a lucrative extension in Atlanta. For a team with an exciting young core of pitchers, throwing down that kind of cash for a veteran – one who was still pitching at a high level at that – seemed like a no-brainer.

Things were not looking good to start the 2022 season though. Atlanta got off to a slow start, and Morton was flat out bad. Though his first 12 starts, he was pitching to a 5.67 ERA. He was still striking out plenty of hitters, but something was clearly off. John Foley of Pitcher List pointed out that his curveball was the root of the issue, and that the pitch just was not quite moving how it used to, despite not losing any spin of velocity from a year ago.

The results support Foley’s hypothesis, as in those first 12 starts, hitters were slugging a whopping .500 against Morton’s curveball. It was at that point that he made the change he needed to turn his season around. 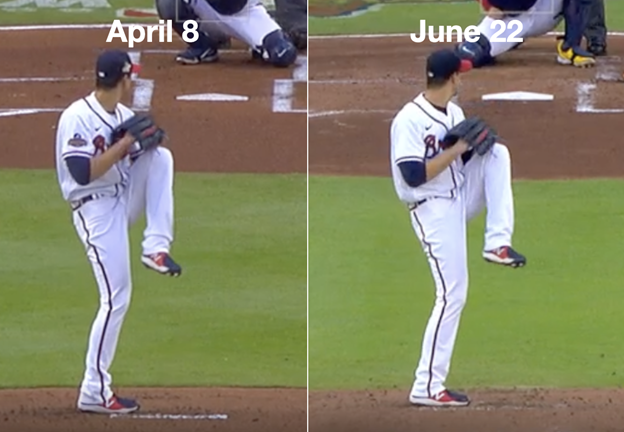 To start the season, only half of Morton’s right foot was on the rubber. In June, he moved over so that his heel is now flush with the end of the rubber. This in turn moved his release point about six inches toward the third base side. 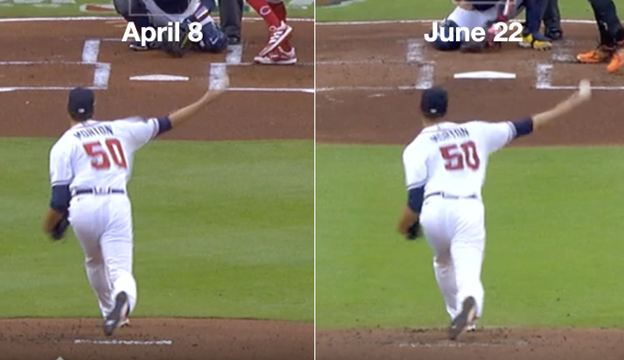 It was a small change, but Morton has been a different pitcher. Since June 17, the day he made the adjustment, Morton has cut his ERA by nearly half, and is eighth among starters in strikeout rate.

If you’re wondering how the curveball is doing after the change, I have good news! With the new release point, Morton has made the pitch lethal again. As a result, hitters have had much more trouble even making contact, let alone good contact. The transition has been so drastic that the pitch went from being one of the sport’s worst pitches by run value to being tied for sixth best.

The shift has also created a much different view for the hitter. Over the past few years, Morton has lost some horizontal movement on the curveball, and while he has gotten some of it back since the season started, moving on the rubber has also created some synthetic break in the form of a higher horizontal approach angle. Before Morton made the change, his curveball HAA was still well above the league average. After making the change, however, he now has one of the steepest in the game.

There are few pitchers, especially starters, who have gotten better with age the way that Morton has, and even fewer that have been able to reinvent themselves so many times with continued success. Surely, this has a lot of that has to do with his willingness to study himself and make adjustments when he needs to rather than be set in his ways. What was such a simple move has paid major dividends, and now Atlanta is in a position to make a run at the division behind Morton’s lead.