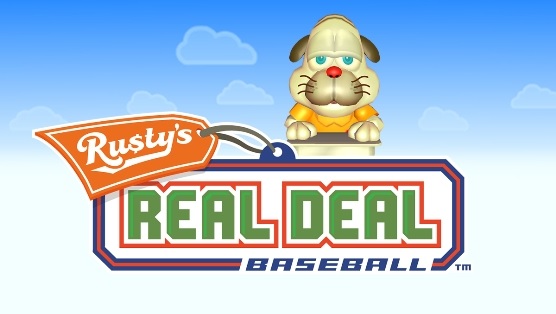 Current availability: Until March 27, 2023—when the entire digital shop shuts down—you can download it for free on the Nintendo 3DS eShop, and make the necessary in-game purchases (totaling all of $16 if you do it right) through the game itself.

Why This Game?: As you saw when you read the above section, there isn’t much time to get your hands on Rusty’s Real Deal Baseball and play it the way it was meant to be played. The digital shop on your Nintendo 3DS is shutting down next spring, but you can play most games you buy before then no problem. Rusty’s Real Deal Baseball, however, is a game that’s free to start, where a significant part of the game itself is the process of purchasing the game. This will take some explaining that I’ll get to eventually, so in the meantime, just know that the end of the 3DS eShop is also the end of this game, and therefore, you should experience it while you still can—there’s nothing else like it out there.

If you’re reading this after March 27, 2023, and you haven’t played Rusty’s Real Deal Baseball, just know that you missed out on an extremely odd little cult classic that’s still worth reading about. 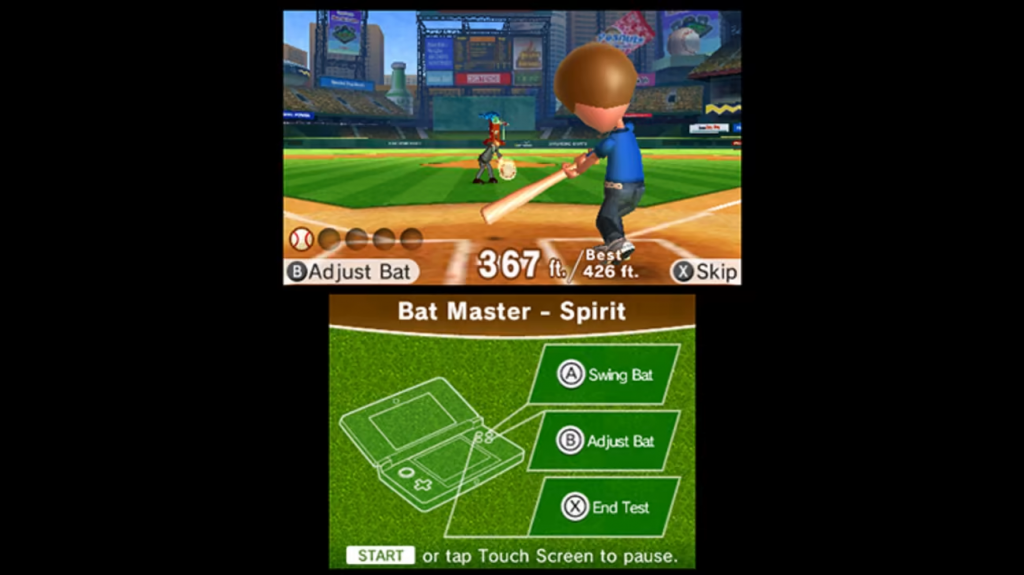 How Does It Play?: The answer to that depends on what part of the game you’re talking about. Rusty’s Real Deal Baseball is actually a series of baseball minigames that will test your ability to hit for contact, power, and accuracy, as well as your defensive skills and fielding. There’s even a game where you get to be an umpire, calling balls and strikes. There are 10 of these games in all, and while the quality of them can vary—the various hitting games are where Rusty’s Real Deal Baseball is at its strongest, minigame-wise—they range from good to great.

For something like the minigame Bat & Switch, things start out simple enough, with you attempting to hit fastballs and curveballs, but the more advanced portions of this minigame have you trying to not just hit these pitches, but hit them at specific targets—some of them moving, like UFOs across the sky, or bombs that, if you swing and miss, will explode and end your game. Don’t you hate it when that happens to your favorite baseball players?

Everything has these kinds of enjoyable escalations, where enjoyable refers to both how the minigames actually increasingly challenge your skill level, and in the odd ways they manage it. Each of the 10 games has five different difficulty modes within it, and a pair of high-score challenge modes, on top of which are an endless mode to see how long you can, for instance, keep up swinging at those bombs before missing one.

Rusty’s Real Deal Baseball also utilizes the 3DS-specific features of the system, and not just the fact the system has stereoscopic 3D. The touch controls are used for certain games, just like the buttons are used in others, and the motion controls powered by the handheld’s accelerometer also get some play. Mixing things up like this, in addition to the ever-increasing challenge and additional modes, is an excellent way to keep Rusty’s Real Deal Baseball from feeling stale as you progress.

And then there is the acquisition of the 10 minigames: that, too, is part of the actual game experience. It involves haggling. Rusty is a dog, and also a former pro baseball player, who is a bit down on his luck in life and love. He’s 56 (in human years). His hair is thinning, except for what’s growing out of his nose. He doesn’t know how to cook, how to dance, how to keep his wife happy, and he fears his life is soon to be upended when she realizes she is far too good for him.

He decides that the way to save his business and marriage is to sell baseball video games to kids. Kids like video games, and will surely purchase them from him. The 10 games Rusty has on offer cost $4 each… until you negotiate him down. Each game can actually be knocked down to $1.50 each, but you have to work to get it. You acquire special items by showing a certain level of competence with each game, and when given to Rusty, he’ll take a big chunk off of the listed price for you as a thank you. After that, you can use coupons you’ve earned by mastering the minigames to knock it down even further—you need to figure out how to balance your available coupons to get the most out of them, too. The game will helpfully tell you that you’ve hit the rock bottom price, and also warn you about how it’s not necessary to pay full price, because the haggling is also part of the game.

Rusty’s Real Deal Baseball has an excellent, amusing script that’s as solid as the minigames you’ll play in between the adventure-based bits. I’ll say it again: there really is nothing like this out there.

What This Game Does Better Than The Rest: The baseball portions of Rusty’s Real Deal Baseball are interwoven with the non-baseball portions—they feed into each other, until you’ve managed to unlock and master the entire game. It’s those non-baseball portions that truly shine, however: the actual baseball minigames are tons of fun, not just to play but to progressively improve upon until you’ve been awarded all kinds of medals and awards and McGuffins for your play. But they’re somewhat secondary in terms of what you’ll remember about Rusty’s Real Deal Baseball, which is to say, you will mostly remember Rusty.

You will remember that he’s a very sad dad, who fears that his failures as a businessman are going to lead his wife to leave him. You’ll recall how, despite knowing that he’s struggling financially and is desperate to prove his worth to his wife, you continually haggled him down in negotiations for those in-game purchases, slashing the prices again and again with coupons and hairpieces and nose hair trimmers that Rusty sees as a way to make himself feel and look attractive to his wife again. You will also recall how his young son is right there in your corner, not his father’s, helping you negotiate your way down to the lowest possible price for each of the Nontendo 4DS cartridges for sale in Rusty’s shop. Hey, the kid just wants to play some video games with you, even if it means he and his nine siblings will only see dad on the weekends from now on. 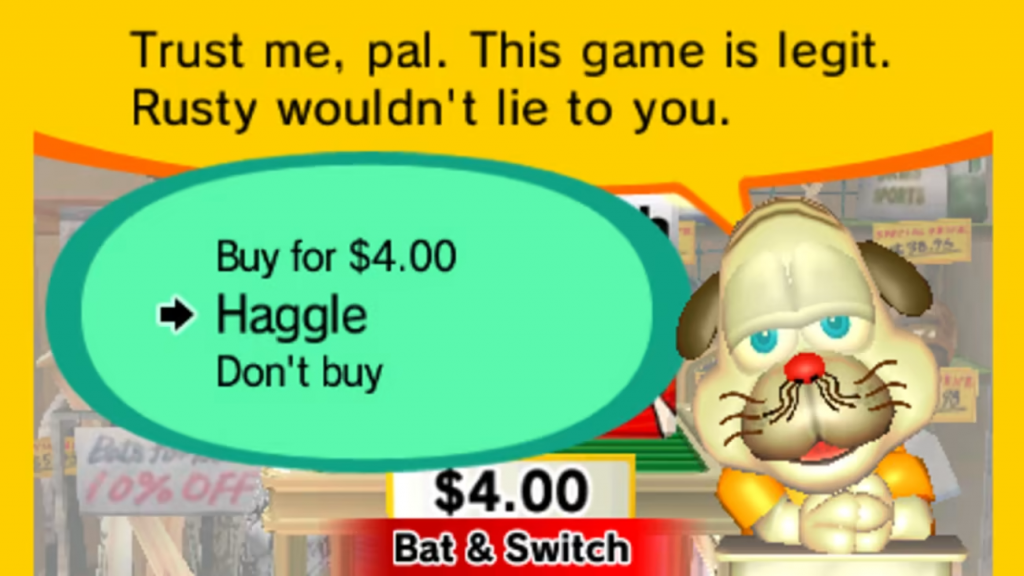 It’s also all a commentary on the endless downloadable content and free-to-start model of games that can both be pretty exploitative, although in very different ways: Abnormal Mapping had a worthwhile piece on this back when the game first released:

The whole game is a breezy hand-waving affair about what’s actually happening, the same kind of broken capitalism narrative that Animal Crossing indulges in with Tom Nook’s constant strong-arm real estate tactics. … [T]he journey of purchasing the various parts of the game is what sets it apart and makes it something special. It’s a game about our relationship with paying for games in a world of in app purchases, seen through the lens of an outdated mode of commerce (who haggles for anything in 2014?), presented through the most superficially cynical way we engage with video games.

Who knew you’d get all out of that out of a game featuring a dog encouraging kids to play baseball video games? Then again, who knew Nintendo would end up selling 40 million copies of a game about a raccoon convincing you to do mineral extraction on colonized islands as a fun vacation activity? Sorry, Tolkien, sometimes allegories are neat. Maybe he would have agreed if he had ever seen a tanuki.

Its Industrial Impact: Well, the exploitative free-to-play model full of microtransactions and gacha purchases and endless downloadable content that preys on people and their excitement is going even stronger than it was back in 2014 when Rusty’s Real Deal Baseball smartly lampooned the practices, so I’d say the industry largely ignored it.

Fungo: Rusty’s Real Deal Baseball was from a very specific era in Nintendo’s history, where they were letting basically whoever had an idea in their various studios roll with it, even if they weren’t usually someone who directed or designed a game. The director of Rusty’s Real Deal Baseball was Katsuhiko Kanno, a graphic designer by trade and in his lengthy employ with Nintendo, a man who spent quite a bit of time on the 3DS working on various system software—like, actual software, not necessarily games—and graphic design for other Nintendo projects. Rusty’s Real Deal Baseball, though, is Kanno’s game, and the only time in his 26-year career that he’s been the director. It’s obviously experimental, and quirky in all the right ways: the kind of game and concept that really can only be released digitally, and not just because it’s built on a foundation of in-game purchases.

Nintendo still produces smaller, digital games, but the era of true experimentation and oddness and “hey let’s see what happens when we hand the keys to someone who doesn’t usually have them” that existed during the lifespan of the 3DS and its predecessor, the Nintendo DSi, is clearly over. Games like Rusty’s Real Deal Baseball might never have attracted a massive audience, but this title, and dozens of others published by Nintendo out of the spotlight over the course of much of a decade’s time, were a significant part of the appeal of the DSi and 3DS systems, to speak for myself. It’s a bit of a shame that the focus now is on larger projects nearly exclusively, hunting for that next Animal Crossing, especially as a hidden treasure like Rusty’s Real Deal Baseball nears its final sunset. Those larger projects are also largely good to great, some of them some of Nintendo’s best-ever work, depending on the game, but still. Look what saying “hey, what the hell” and letting someone like Kanno work on their weird idea allowed to exist? Bring that kind of spirit back—it’s the same kind of love of the game that kept Rusty going, even as his profits plummeted.

Rusty’s Real Deal Baseball Wins Above Replacement Game: As a businessman, Rusty is just awful. He’s never going to make any money with his current tactics! As a guy who just wants kids to experience baseball and learn to love it, though? As a softy who just cares about the game? Rusty is a legend off the field, too. He’s the real MVP, here, so let’s give him one WARP for every dollar you have to spend in his game: 16.0.

Marc Normandin currently writes on baseball’s labor issues and more at marcnormandin.com, which you can read for free but support through his Patreon. His baseball writing has appeared at SB Nation, Defector, Deadspin, Sports Illustrated, ESPN, Sports on Earth, The Guardian, The Nation, FAIR, and TalkPoverty, and you can read his takes on retro video games at Retro XP.

You need to be logged in to comment. Login or Subscribe
John Mayne
I never saw this game, but this was such a great writeup. I've enjoyed the series. One issue: