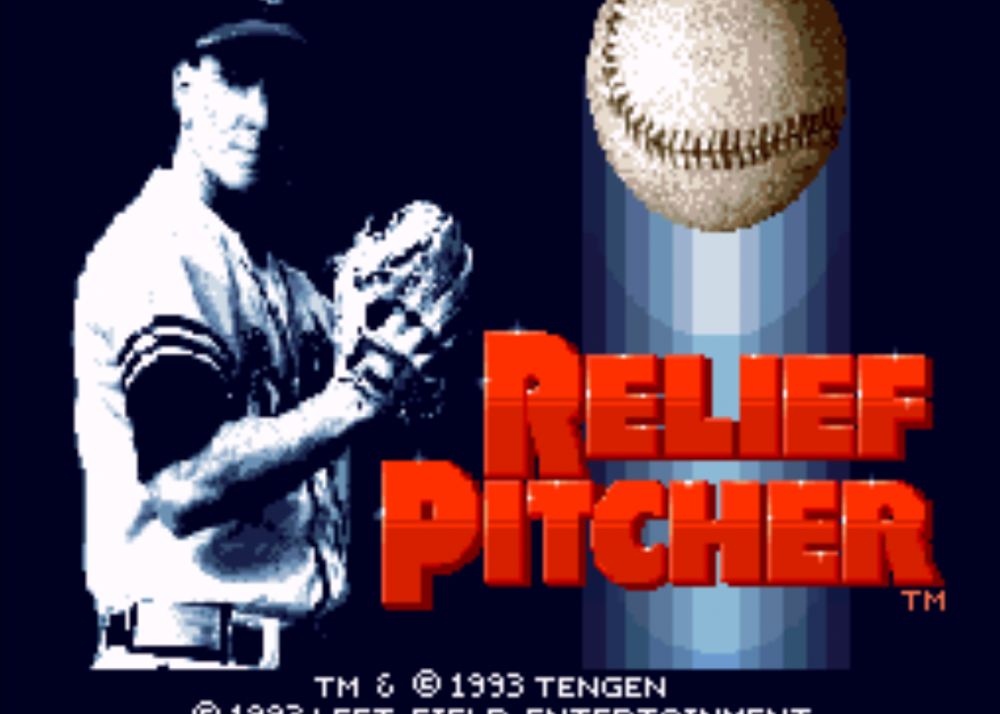 Why this game?: There are few things that mythology loves more than the punishment of hubris. Icarus, Babel, Joe Charboneau, you name it: If there’s one thing we love as a species, it’s knowing your place, and staying in your lane. Art has been primarily reactionary since the day Aristophanes review-bombed Socrates to death, and early 16-bit games development was exactly the sort of behavior our philosopher-kings have been trying to exile beyond the castle gates. Freed from all the technical limitations of the 8-bit consoles of their older brothers, the expanded graphical and sound capabilities, these mavericks looked at each other and asked: What can we not do? The answer was that they could do anything. Not well, but anything.

Relief Pitcher is an utterly forgotten baseball title in an era of forgettable baseball titles. It’s been remarked that baseball was in its silver age in the early 1990s, before the strike hit, with multiple baseball films being released each year until The Scout killed the streak. So too with video games: Every star of the age got their face slapped on the cover of a game that had no other connection to them, and nearly every one of those games was basically a rip-off of RBI Baseball.

Relief Pitcher tried to do something completely different. While allowing you to play a full game with one of eight fictional teams, the hook is a twelve-game reliever mode, in which the game simulates straight to the late-and-close innings, and tasks you with holding down the lead. It’s the first real stab at the life-of-a-guy modes that found all modern sports titles, and hints that there are more ways to play baseball than just directing all the players from the sky like a god. Unfortunately, the game couldn’t quite be what it was trying to be, and it tried to be a few things it shouldn’t have been. 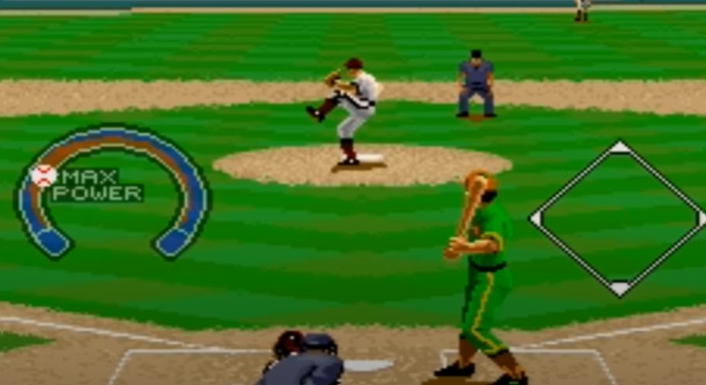 How does it play?: It plays very badly, if you were curious.

Pitching is performed through a golf-like double click power bar, asking the player to time both the control and the power of their pitch before delivery, and then steering the pitch on its way to the plate. It works well enough. Each pitcher is allowed three pitches, and in a nice bit of customization, you can select your pitching type when starting the game, selecting a signature pitch (knuckle, rising fastball, screwball, or the mysterious “sinker”), handedness, and arm slot.

The camera is pulled down tight behind the catcher, as is often the case for this era, but when the hitter makes contact, it doesn’t change. Instead it pans left or right to adjust for the path of the ball and watches it sail away into the distance. This would seem to make defense a nightmare, but suddenly you remember: You’re the relief pitcher. You don’t have to play defense. The fielders scurry off of their own accord, lining up to catch or track down the ball wherever; your only inputs are to throw or run it in. Cutting out nearly all defense seems like a weird choice for a baseball game, but given how terrible it is to play defense in most games of this era, the reprieve is welcome.

But we said it plays bad, and we’re getting to it. Unfortunately, the title “Relief Pitcher” is a bit of a lie. You also have to play on offense, because it’s possible to allow a run to tie up the game. This is where it all falls apart: The oversized sprites and janky animation are tolerable when they occur independently of your inputs. When hitting, the animation lag is so crippling that you’re best served to start your swing before the ball leaves the pitcher’s hand. And you have to aim your swing at the part of the plate you think the ball might be heading toward. And your character’s swinging motion is not going to represent that aim at all. Bases Loaded, for all its quirks with 3-D, changed the path of the swing if you aimed inside or out, up or down. In Relief Pitcher, this is a base hit: 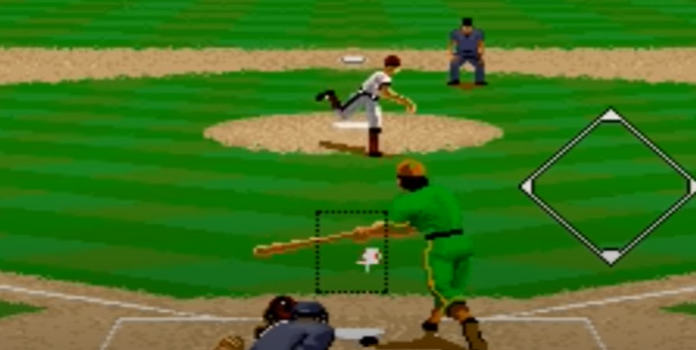 The Sony Playstation made games with men composed of tortilla chips. The ugliness of the PS1 was, in a way, a blessing: its obvious limitations kept its designers in check, asked them to think about what they were actually portraying on the screen. The Super Nintendo could digitize men to look infinitely more beautiful, more realistic than the 32-bit games were capable of outside cut scenes. It could not make them move gracefully at all.

What this game does better than the rest: Given that the game couldn’t even stick to its “control one player” premise, probably the most impressive aspect of the game is its full, continuous play-by-play audio. All SNES games incorporated at least some amount of digitized sound, but usually only sparingly, the calls of the umpires and perhaps some brief play-by-play info like the count or the outs.

Relief Pitcher not only attempts a level of description that would be in line with the Madden titles of the following generation, it employs one of the greats of the industry, Hall of Fame announcer Jack Buck, and even throws his likeness on there for the inning breaks. There isn’t a ton of variety to his calls, and they’re spliced heavily: “A line drive / to shallow left field / makes the catch.” And since the designers were clearly still tuning the game after Buck did his reads, the tempo of the action doesn’t quite match: The ball often finds a glove before he can describe it, causing his phrases to run into each other. But it’s a noble effort, despite the necessary compression of the pre-CD game format. (You can listen to a prototype of the game for the Atari Lynx, a handheld that also flew far too close to the sun, except instead of melted wings Icarus just runs out of battery life. It… doesn’t do Buck justice, shall we say.)

Its industrial impact: None. Relief Pitcher was successful in arcades but took two years to reach the SNES, which was already more than halfway through the console’s life cycle. Some of its elements were eventually incorporated into other, better-produced games, unknowingly. If Bases Loaded represents a dead end in the evolution of video games, Relief Pitcher is like hopping the guard rail over the cliff edge.

Fungo: One thing you would think you could rely on the internet for, as a service built by middle-aged nerds, is that by 2022 we’d have a complete catalog of scanned SNES manuals. Amazingly, there are 25 games that have never had their guidebooks documented for posterity, and Relief Pitcher is one of them. God knows what kind of worldbuilding has been lost.

Relief Pitcher’s Wins Above Replacement: 0.3. There’s an idea here, one that has never really fully been actualized in three intervening decades: Baseball games don’t have to encompass entire baseball games. A real baseball game is a daily ten-hour spectacle from the arrival of the stadium staff to the last coach to leave at night. There are stories, and games, to be created out of the pieces of that event instead of just representing the one we see, day in and day out, on television. OOTP, of course, plants itself in the GM’s chair, and Madden once tried unsuccessfully to gamify the trials of the NFL head coach. Now, instead, sports games have turned their eyes to making a movie out of a create-a-player, growing up with him, and including RPG elements. It’s a fine way to go, but it’s not the only way.

Relief Pitcher’s greatest flaw, ironically, is one of the few it could have actually handled within its limitations: Actually focusing on the pitcher. He isn’t given a name, or a picture, or a shot of him waiting in the bullpen. There’s nothing to tie the player to him. Go home with him after the game to the empty hotel room after a tough loss, or sign autographs at the rail. Make him sit in the bullpen, warm up, argue with his domineering bullpen coach like Jim Bouton did in Ball Four. Include a sunflower-spitting minigame. Try weird things. This didn’t have to be a baseball game, if it didn’t want to be. I wish that other Relief Pitcher was the one that got made.

You need to be logged in to comment. Login or Subscribe
Shaun P.
I just knew that the "tortilla chip" link was going to go to a picture of Cloud.

I never heard of this game and it certainly sounds interesting, despite all the shortcomings. I wonder why no one has tried to take the concept and just make it better? Seems like a great idea for a short game.
Reply to Shaun