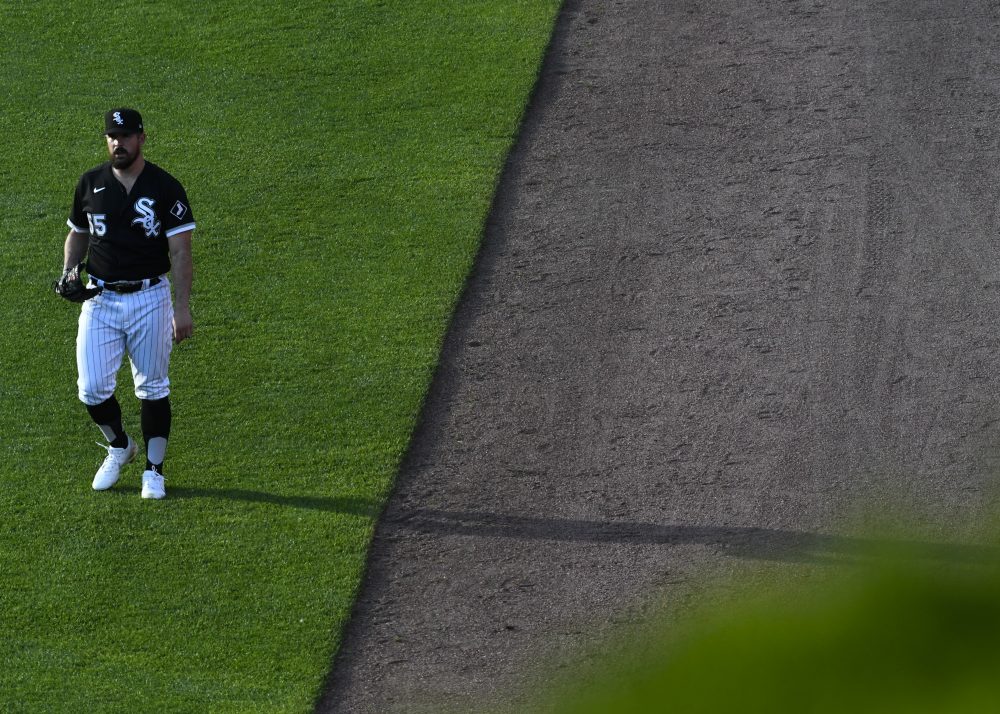 The San Francisco Giants sign LHP Carlos Rodón to a two-year, $44 million contract.
When news of the impending CBA ratification broke Thursday afternoon, it was an open question how long we’d have to wait for a free agent signing. With four weeks until Opening Day and hundreds of players still looking for major-league deals, it will inevitably be a flood of movement, but it took nearly a full day between the news of an agreement and the first free agent signing—Drew VerHagen to the Cardinals on a two-year deal. Even with the caveat no single deal is going to say much of anything definitive about the balance of power between players and owners in the new CBA, that one’s particularly obscure to interpretation. Potentially more instructive was a deal for which news broke shortly after: the Giants added the fourth runner-up in last year’s AL Cy Young voting, Carlos Rodón.

In the Giants’ offseason primer, I noted that despite the club’s liveliness in the month of pre-lockout free agency, they were a ways off from their 2022 roster lining up with the previous, 107-game-winning edition of the team. The team’s two best players by WARP, Kevin Gausman (4.5) and Buster Posey (3.9), would not return, and the rotation featured four entrenched and (recently) accomplished pitchers followed by several unknowns. Rodón made an obvious addition, his season aligning closely with Gausman’s in all but health and thus workload—Rodón had a 69 DRA-, Gausman 73; among pitchers tossing 100 innings that placed them third and 11th.

The sticking point is the big lefty’s health: shoulder issues, which first popped up in 2017, limited the 29-year-old to just nine starts in the second half, and at nearly an inning fewer per outing (5.6 IP/S in the first half, 4.8 in the second). This malady succeeded a Tommy John surgery that resulted in just 41 ⅓ innings across 2019-2020. Shoulder injuries tend to be enigmatic, but we have one time-tested barometer: his velocity dipped concerningly throughout the second half, though the rebound in his solitary career playoff start is reassuring. 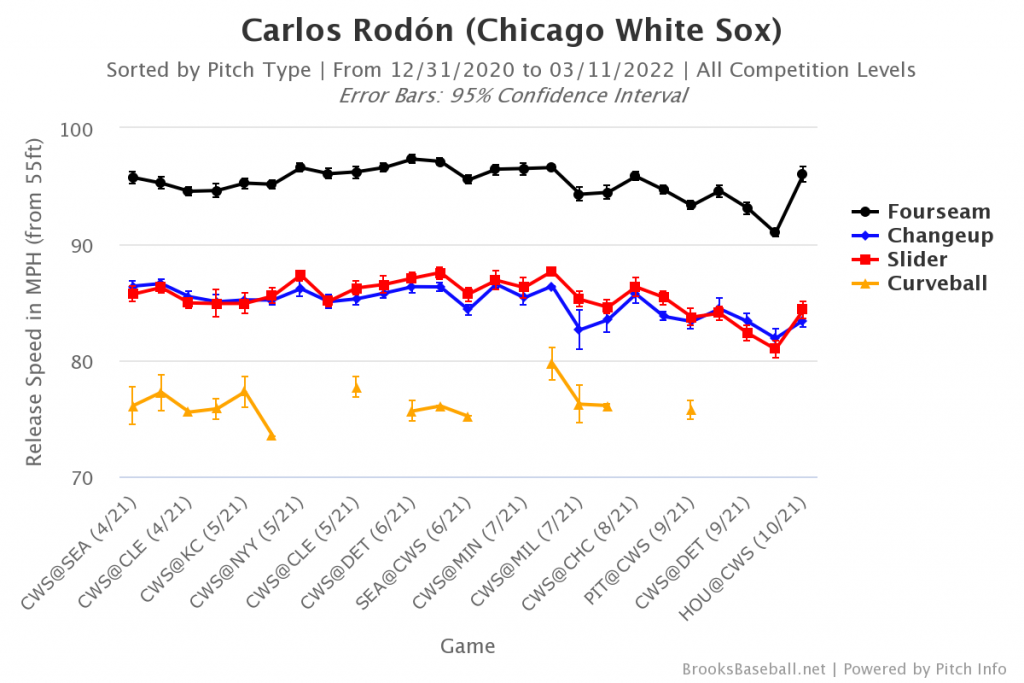 Of potentially larger concern was the White Sox’s decision not to issue Rodón a qualifying offer, which should have been something of a foregone conclusion unless they had health questions. While it’s easier to say now that the former third-overall pick has a deal, Chicago’s decision seemed questionable at the time. Clayton Kershaw, for instance, was reportedly only not a QO recipient because he requested the Dodgers not tag him with such an offer. His health concerns appear at least as pressing as Ródon’s and he’s half a decade older. Even if you have doubts clubs were saying his medicals were “actually very good,” it’s probably reasonable to dismiss the QO snub as an example of the White Sox being stung by owner Jerry Reinsdorf’s characteristic cheapness.

Despite their many successful picks on the free agent market and waiver wire throughout the Farhan Zaidi front office era, the Giants haven’t really been in the business of taking substantial risks. Most of their success stories are in breakouts or revitalizations, and there’s not really a comparable example of the club taking on this much potential dead money. There are no guarantees, but if you’re feeling pessimistic about Rodón’s health, recall you’re also doubting the team that has, of late, excelled in player health and development more than any other.

The health of Rodón’s left arm is something Giants fans and employees will be carefully monitoring over the next months, but the fatigue he experienced in the season’s waning months after so many shuttered seasons shouldn’t be weighted similarly to his previous injuries—or many of the warning signs pitchers and their teams have little choice but to cautiously ignore all the time (we’ll have that Kershaw TA soon, by the way). Given how widespread fatigue and overuse injuries were last year, 132 ⅔ innings seems just fine. The doubts given Ródon’s long-term health are more justified: his only season since debuting without an IL trip is his rookie 2015, and any recurrence of shoulder injuries is going to be a persistent anxiety throughout a player’s career. He also went on the 60-day IL each year between 2017 and 2020.

Still, you know the saying about cigars. He barely declined even with staccato usage in the season’s final months—his DRA- across August and September was 76, within a margin of error from his season-long mark. He’s a flamethrowing lefty who had a 28% strikeout minus walk rate. The Giants aren’t taking on as much risk as one might think, here, and stand to earn some of the best value among this winter’s high-profile contracts if things go their way. Fit aside, the contract’s $22 million average annual value matches what Gausman earns, barely outstripping Robbie Ray, in two-fifths the guaranteed years of those starters. This despite Rodón being younger than both pitchers and projecting better moving forward than either—PECOTA projects an 81 DRA-, 15th-best among starting pitchers and 37th overall. If Rodón performs anything like that, he’ll take the player opt-out in search of a nine-figure deal at age 30, though that would be as much a win for the Giants.

For the reigning NL West champions, a short-term deal was likely the only instance in which they’d commit this much money this offseason. The club hasn’t been cheap in the Zaidi era, exactly, but certainly deliberate—coming into the offseason, the Giants had just four players under guaranteed contract for 2022, Brandon Crawford (who extended last August), Evan Longoria, Tommy La Stella, and Jake McGee. Crawford and La Stella were the only guaranteed 2023 deals. Despite adding five contracts guaranteeing $75 million for next season, only one extends further than two seasons. The Giants have not been subtle about meticulously crafting and widening a window; five of the team’s top six prospects have a 2024 ETA.

Given that the team is a contender now, it’s clear the roster-building priority is bolstering the current squad without barring any avenues to future rosters. Since Zaidi took the helm in 2018, the team’s rarely dealt potential future contributors and has numerous times taken on money for additional prospects. In the worst case scenario, Rodón’s a sunk cost for the next few seasons, in which case the Giants still appear an incipient dynasty, if a highly compromised championship threat in the immediate-term. The best case scenario speaks for itself, but it’s a chance for which the Mets guaranteed a lot more to Max Scherzer. The likelihood of that outcome might be diminished in Rodón’s case, but his bet on himself matches the established free agent contract norm for a breakout ace, offers the Giants exactly the sort of player they require, and doesn’t preclude him from a future megacontract. It’s one signing, but it’s nice to have the first contract of the new CBA feel like a win-win. —Ginny Searle

Let’s be clear — not dramatically up, but this helps the Rodón glass half-full folks at the margins. His park? Slightly pitcher-friendlier. His new team? Better at navigating injuries to pitchers and locking in the gains of late bloomers on the mound. The defense he plays in front of goes from a bottom-three outfit last year to a top-half 2021 group this year.

Our PECOTA projection expected Rodón to retain many of the advances he’d made in 2021 already, with a 50th percentile ERA of 3.17 and comparable BB/9 and K/9 rates to his run at Cy Young contention last season. Adjusting that up slightly turns Rodón into an even better upside play at the 131 ADP he’s been at. Still, no matter the uniform, you’re betting on a guy who has never topped 165 innings pitched in a season. At least in non-keeper leagues, your bet is half as long as Farhan Zaidi’s. —Howard Megdal