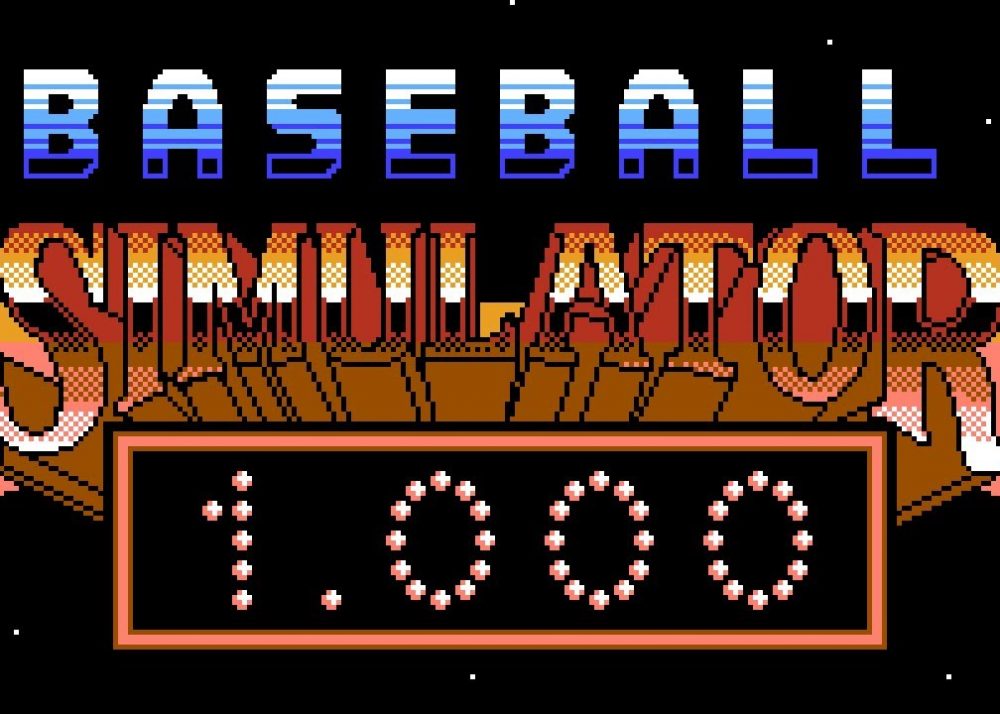 Why Baseball Simulator 1.000?: Baseball is weird enough when bound by the laws of physics, but things get particularly strange in Baseball Simulator 1.000 (BS1K), an ironically-named joyride and league-average NES baseball game that entered the Western marketplace at the close of the 80s. The title implies something of a strategy or simulation journey with little emphasis on the on-field, but in reality, this game focuses on a relatively-standard arcade-style one- or two-player standard ballgame … unless you open the forbidden gate to the Ultra League.

When playing with Ultra League teams or players, you can assign and activate Ultra Plays, which take baseball from drab to dashing. Want to give your pixelated players the ability to leap 30 feet in the air, surround balls in play by a maelstrom of broken bat particles, or freeze a pitch in mid-air a la Kylo Ren and a blaster bolt? Go for it. You’re restricted to those ultra hits, pitches, and plays that are assigned to your players and a limited number of points to use them during the game. Some are wildly effective against human opponents, some stifle the computer players, and some are just hot garbage wastes of time (see: Super Slide). They all make the game delightfully weird and quirky, alongside with other visual tics like games being played in space and, inexplicably, in the shadow of the Kremlin. 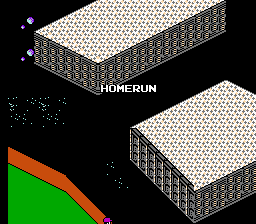 How Does It Play?: If you’ve played nearly any early-era baseball video games, this one will look familiar. You can go for one- or two-player games. There’s a batter-pitcher matchup screen. After contact, you’ll switch to a top-down, wide-angle fielding screen. Throws and baserunning align to the directional pad. Controls are… let’s say spacey? (Especially during fielding.) But a lack of 2022-appropriate responsiveness doesn’t break the game, and BS1K is pretty much in line with most of the other late-stage NES baseball games or early-stage 16-bit console offerings.

One interesting tidbit about BS1K is that when controlling one fielder, you control them all, meaning running to the left means *all* your fielders are running to the left … which can make things a little tricky when it comes time to chase down a ball in the gap and then hit a cutoff man in the right part of the field. It’s less like K-pop choreography and more like a middle-school marching band, but is charming in its own way.

Beyond standard games, you can set up leagues and seasons going up to 165 games, making this the perfect time-waster for a bored 9-year-old with an obsession with baseball statistics and customization in video games. (The number of hours logged in BS1K and Final Fantasy on that NES tells you everything you need to know about the next 30 years of this author’s life.) You could run game after game of launching missile hits that carry fielders crashing into the walls and throwing literal fireballs past opposing hitters in search of that elusive perfect season.

What This Game Does Better Than the Rest: Almost 33 years after release, the honest answer here is … nothing. Don’t get me wrong, this is a fun game that can be a blast to play, but if you want the full BS1K experience, go ahead and check out its younger brother, Super Baseball Simulator 1.000 on the Nintendo Switch SNES app. There’s a few different ultra plays and some beefed up graphics, and it will give you all the fun of the annual X-Men baseball game, chock full of superpowers and bizarre locales.

The original Baseball Simulator 1.000 has a lot going for it: an upbeat background track, the ability to customize players and their assigned Ultra Plays to create your own favorite playstyle, and the ultimate goal for any true BS1K-head: how many defenders can you line up behind the game’s infamous Missile Hit?

Let’s talk about that Missile Hit for a minute. The Missile Hit is a line drive that when caught, carries the defender who snagged it backwards into the wall, where it stuns them and drops to the dirt or, in one or two stadiums, carries the poor afflicted defender over the wall and out into the ether. I promise you that no other baseball video game allows you to hit a ball so hard that it carries an opposing fielder into space, no matter what ratings they’re putting on Vladimir Guerrero Jr. in The Show 22.

Its Industry Impact: No one would claim that Baseball Simulator 1.000 redefined the baseball or sports video game, but it absolutely added a fantastical element to the game that would so often be replicated in the future. Shortly after, you’d see robots playing baseball, mutants playing football … and the most direct through-line I see today is in the NBA Jam and NFL Blitz arcade franchises. If you could’ve added the kinetic thrill of basketball to the power-up ideals of BS1K, you could’ve had gold in the arcade baseball game space.

And for those of you who long for the days of the player challenges in the mid-aughts MVP Baseball series, where you’d have to throw the ball through rings and launch liners into targets, you might want to thank BS1K for that (at least a little) too.

Fungo: There were seven iterations in the Ultra Baseball series delivered in Japan, the first being what was localized here as Baseball Simulator 1.000. Four of the next six released in Japan have the Nippon Professional Baseball license, and near the end of the series the character models became super-deformed chibi-style representations of players, which could be construed as pretty adorable or pretty weird, your mileage may vary. (Check out the representation of Julio Franco and make your own call.) And if anybody in pro baseball has ever deserved earning the Missile Hit, it’s probably Ichiro in the ‘94 version of Ultra Baseball.

Baseball Simulator 1.000’s Wins Above Replacement Game: 1.5. I’m not sure how many people today would spend hours upon hours playing this one with the library of other, more playable baseballing video games loose in the world… but it remains a fun way to spend half an hour or so, especially two-player, as you figure out new and exciting ways to knock out opposing fielders and confuse hitters with your Snake Ball. 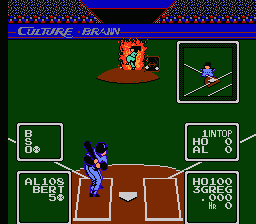 You need to be logged in to comment. Login or Subscribe
Matt Bartman
Baseball simulator and FF - sounds about right for me as well. Fun nostalgic article. Thanks!
Reply to Matt
Shaun P.
Somehow I never played this one, though I too spent untold hours on FF. I will have to check out it's SNES cousin on the Switch.
Reply to Shaun
Tony Jones
I loved, loved, LOVED this game!! I still play it sometimes!
Reply to Tony
Softy Electric
I don't think I loved anything more as a child - aside from my dog? - than Super Baseball Simulator 1.000. It was the only game that had stats-tracking. I played so much seasons, simulating or playing the games, writing down player stats on computer paper my father would bring home from work.

I never used the special powers; I was playing real baseball n my world. I would do my best to compress MLB players' names into the five characters allotted. Ryne "Snbrg", Joe "Cartr"; Chuck "Kblch" was tough.

It had battery backup to save the statistics, and one day at least a couple years' in, the battery failed. The game worked, but the stats wouldn't save. I was heartbroken.

But I wrote a letter to Culture Brain - there must have been a mailing address in the instruction booklet - asking them for help. I'm pretty sure it was the first time I ever wrote a letter or really communicated to anyone "in the public."

I don't know how long it was, but I got reply from Culture Brain with a brand-new cartridge and a thank-you for writing. I was in awe.

I wish I knew who worked at Culture Brain USA at the time so I could thank them. They made a very lonely boy very happy.
Reply to Softy
nall23
Thanks for sharing. It was the first game I can recall that had such a vast amount of statistics and I loved it for that reason. With other earlier video games, I also recall having to manually track the statistics on paper.
Reply to nall23
ccmonter
Yes! Barely a mention of the statistics tracking in the article.
I also spent endless hours playing Baseball Simulator 1.000 because of the statistics tracking and player editor. Full MLB teams entered manually and carefully curated. Real-life trades entered as quickly as I found out about them.

The statistical faults in this game led me to develop my first real computer program. A baseball simulator that would execute entire seasons with input from real-life player statistics.
Reply to ccmonter
Bryan Grosnick
The stats tracking and the ability to edit your player names was absolutely essential to my enjoyment of the game: I definitely spent a lot of time with my rotation of DOC, CONE, VIOL, SID, and RON seeing how many 20-game winners I could stack on my virtual Mets, and if I could get Dave "Missile Hit" Magadan up past a .500 batting average.
Reply to Bryan
Pete McHugh
Definitely a 5-6 WAR game. Loved it as a kid.
Reply to Pete