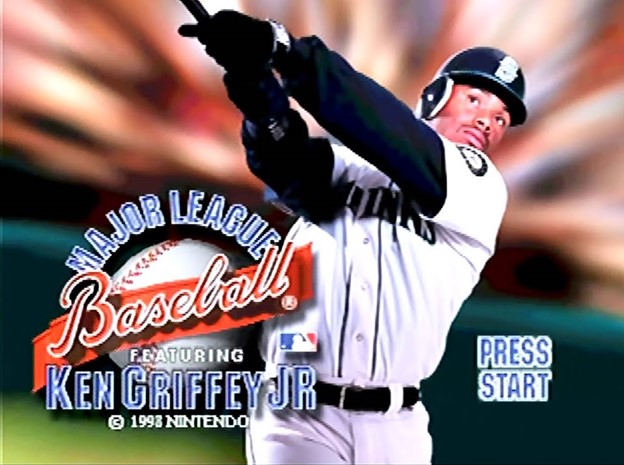 Why this game?: It’s the spring of 1998 and three baseball games are coming out for the N64. Which one should you get?

First, there’s Mike Piazza’s Strike Zone. You might recognize that name, since Mike Piazza was just in the news: 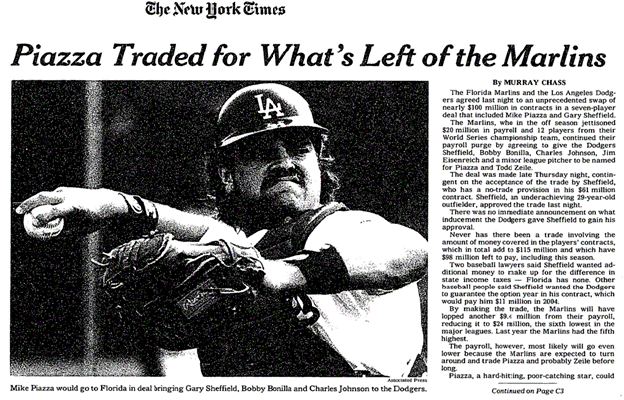 See the face he’s making? Mike Piazza’s Strike Zone has similar energy. Somehow you hit and pitch from the point of view of someone standing several feet off to the side of the home plate umpire. Somehow the graphics are Super Nintendo level. Somehow, there is a gigantic advertisement on the Comiskey Park scoreboard for Diet Lump Dog Food. No, I am not joking. 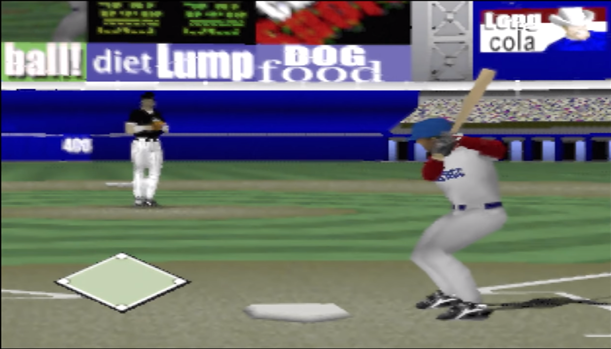 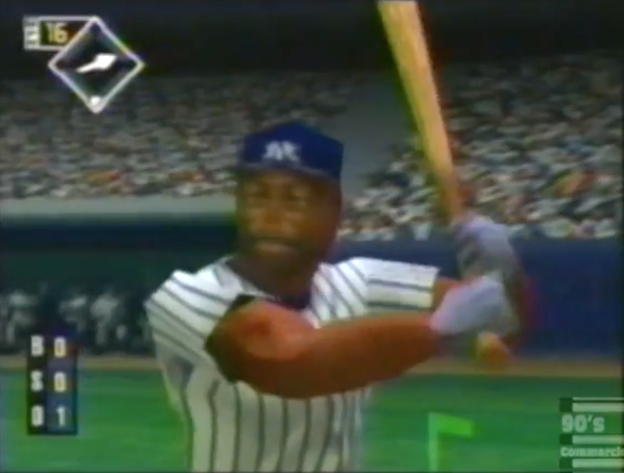 Is that the real life face of Chili Davis squished onto a potato? Maybe it’s Bernie Williams, if you flattened his head in a laundry wringer and then reinflated it.

Last, there’s Major League Baseball Featuring Ken Griffey Jr. Ken Griffey Jr. is literally the coolest person in America. He ran for president and got at least one vote. He hit 56 home runs the prior year, and on release day he’s on pace for right around 60. Unlike Larry Walker, most people seem to know who he is. Unlike Mike Piazza, most people seem to like him. So that’s the game you get.

Oddly, once you play the game you start to wonder if it’s actually an elaborate plot to make Ken Griffey Jr. seem less cool. He doesn’t wear a backwards hat or rob home runs. He doesn’t even do his signature bat drop. The only thing the game emphasizes is his reedy, high-pitched voice.

Major League Baseball Featuring Ken Griffey Jr. features the Kid in the way rap songs from the early 2000s featured Lil Jon: you hear him right at the beginning, and then every once in a while he urgently interjects to add something of no value whatsoever. Every time you turn on the game—every single time—you hear the coolest person in America carefully enunciating the words, “Hi, I’m Ken Griffey Jr. Let’s play Major League Baseball.” After the third time you start saying it along with him. After the 15th you start mocking him outright. Make a leaping catch and out of absolutely nowhere the disembodied voice of Ken Griffey Jr. will say, “Great play, kid.” And then he’s gone. Strike out to end an inning, and he’ll say, “This guy’s got some heat,” and then vanish into the ether like a dorky phantasm.

How Does It Play?: Not to get too technical, but the gameplay slaps. It rides the line between arcade and simulator styles, moving at a fast pace while still feeling relatively realistic. The pitching and hitting mechanics—the heart of any baseball game—are intuitive, with enough nuance to keep them interesting but none of the complications that tangle up so many more recent games. When playing against another person, you can absolutely sit on a curveball and spit on anything straight, or mix your pitches to throw the batter’s timing off.

Full season mode has trades, free agent pickups, injuries, and an All-Star game. While researching this article I got sidetracked several times trying to trade for Mariano Rivera.

There are also plenty of quirks to either love or hate: The music seems to have been composed by Herbie Hancock’s younger, less talented brother. Fielders grunt audibly when they dive. If you press the dive or jump button at the exact right moment, your fielder will wait until they catch the ball, and then dive or jump—at which point the disinterested voice of Ken Griffey Jr. will say, “Look at that one-handed grab.” There’s a cheat code that lets a fielder fly around the field for no reason. There’s a cheat code that makes the batter explode.

What This Game Does Better Than the Rest: Fielding is the achilles heel of early baseball games. If you can’t tell where the ball is going or which fielder you’re using to chase it down, you’ll get frustrated and quit. Griffey nails it. There’s information in the crack of the bat, in whether the batter was early or late, in whether they swung above or below the ball. The camera follows the batted ball out into the field, but in the split second before it does, you catch a glimpse of where the ball is headed. The timing is impeccable. It’s just long enough that you know who your fielder will be and where they should go, but just short enough that the decision feels instantaneous.

The game is full of these Goldilocks Zone details. The border of the strike zone appears for the slightest moment when the pitcher begins his windup. It gives both batter and pitcher a good sense of the zone without making every borderline pitch an obvious decision. Pitch movement is believable, and fielders never look awkward catching or throwing the ball, even on a dead sprint or after a diving stop. The ugly fluidity of the 8-bit era and the gorgeous-but clumsy over-animation of the 16-bit era finally found their happy medium.

Its Industry Impact: The game experienced extensive delays, and instead of being the first baseball game on the N64, it came out alongside, and was immediately overshadowed by, All-Star Baseball 99. Most reviewers rated ASB higher than Griffey, praising its graphics, which are indeed much better and smoother. However, that smoothness came at a cost. All-Star Baseball is visually much darker, and the elaborate rounding and shadowing that’s intended to make the players look more realistic instead makes them look mottled and splotchy, like long, skinny cows who learned to hit a curveball. Also, the “real life player faces” undoubtedly fueled the nightmares of an entire generation of children.

Regardless, Griffey’s designers clearly took the criticism to heart. In 1999 Nintendo released a sequel, Ken Griffey Jr.’s Slugfest, which adopted the same skinny cow graphics. It also introduced a create-a-player mode. When your custom player came to the plate, the announcer would even say his name, provided there was an MLB player who also had that name. Here I would like to offer my heartfelt thanks to Deivi Cruz and Shane Andrews.

Fungo: Amazingly, before this game Angel Studios had never made a baseball game, or any kind of video game. It had created cutscenes for two Sega Saturn games, but was best known for making the CGI effects in the movie The Lawnmower Man. Or maybe for making the 3D graphics in the music video of Kiss That Frog, by Peter Gabriel. I guess it depends how big a Peter Gabriel fan you are.

Wins Above Replacement Game: I’m going to stop myself at 8.6 bWAR—to match Ken Griffey Jr.’s best season—but the truth is that WAR is a counting stat, and Griffey keeps racking up the wins. It is endlessly playable. My friend Jared and I spent the entire summer of 1998 playing a full 162-game season so that we could meet in the World Series. I played 162 games. I watched Jared play 162 games. We won our respective pennants. Then at the end of the summer I won the first two games of the World Series and Jared refused to play any more. After playing and watching 340 games we never finished the season. Twenty-four years later I still play Griffey every once in a while, and apparently the Mets do too.

And the crowd goes moderately wild for a rain-delay Mets RBI double to open up the scoring against the Brewers in Major League Baseball Featuring Ken Griffey Jr. on N64 pic.twitter.com/mh64OYCzsj

https://www.baseballprospectus.com/news/article/58032/returning-home-to-baseball-with-the-social-distancing-baseball-league/
Reply to Noah
David Andrews
Allow me to quote the legendary Noah Frank: Hell yeah
Reply to David
Cliff Mayo
I pulled this game out of the attic when the pandemic started. It's still perfect.

You forgot to mention the guaranteed homer (if you made contact) with Griffey cheat code, though ;)
Reply to Cliff