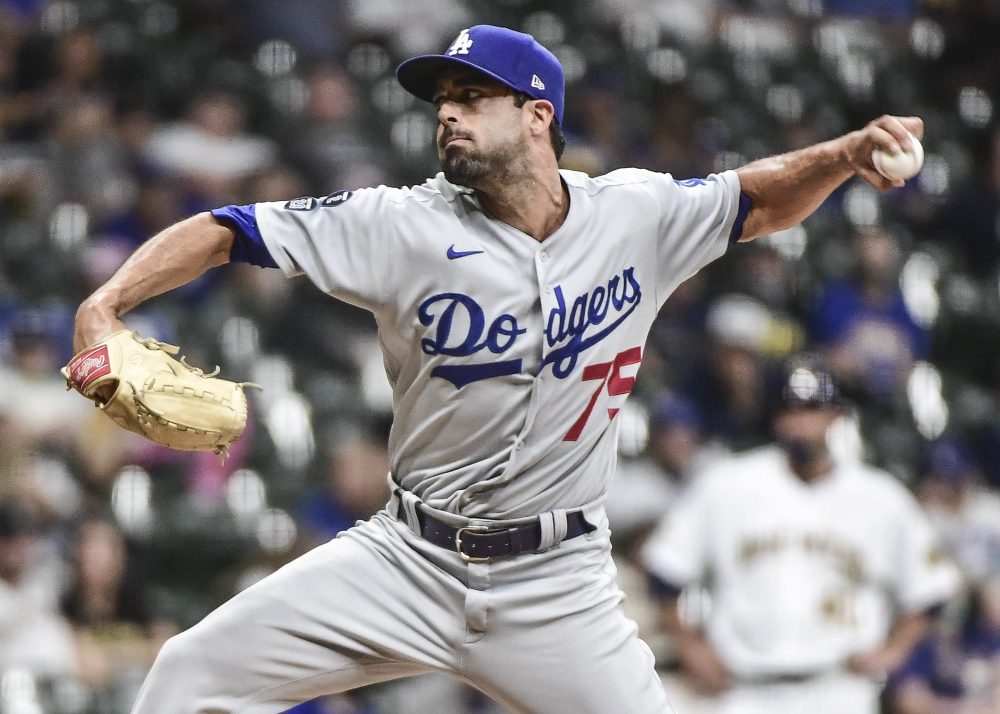 This article was originally published on May 24.

In the seventh inning of a showdown between the division-leading, defending champion Dodgers and their upstart rivals from San Diego, with the go-ahead run standing on second, Los Angeles turned to Scott Alexander. These were the two best teams in baseball, if not by record then by talent, and while it was only April, it carried the aura of a playoff environment. These titans were going to be fighting for the division all year long.

It’s a bit difficult to fathom how Alexander was the call, as he wasn’t close to the top man on the bullpen totem pole, even with the Padres sending up pinch-hitting lefty Trent Grisham (who they immediately swapped out for Wil Myers against the lefty hurler). Alexander got out of the inning with a ground ball, and faced two more batters in the bottom of the eighth, allowing one to reach base. He gave way to … Dennis Santana.

Why these two? Alexander and Santana had each received at least one day off before entering this game, while higher leverage relievers like Blake Treinen and Victor Gonzalez had pitched the night prior.

Bullpen usage appears to have undergone a dramatic change, despite the excess of arms increasingly available between roster breakdown and increased commuting. We’re using the bullpen more but using individual relievers less. Below is a chart documenting the percentage of relief appearances on back-to-back days through Mid-May, over the last two decades:

Reliever usage is just a symptom of the larger trends that have been swirling around baseball, and seemingly picking up momentum. The no-hitters that have descended upon the league like locusts have been the most noteworthy of these changes, but there are others: The Seattle Mariners dipped below the .200 batting average mark as an entire team, while starting pitchers continue to look more and more like glorified openers. After dipping below five innings per start in the delicate times of summer 2020, that number has rebounded this year … to 5.1 IP. Hell, Triple-A teams, ostensibly still part of a developmental system, are now finding there are innings even their relievers can’t make use of:

Until recently, the priority of MLB commissioner Rob Manfred has been pace of play, but the stagnation of offense and the unflagging rise of the three true outcomes has raised a growing cry for something to be done. This is not 1968; pitchers are not universally dominant, and runs per game is not dropping to 2013-15 levels. (2021 is currently running 4.35 R/G, and as the summer arrives, that number will probably reach the same rate of 2016). The problem is that pitchers are increasingly dominating a majority of hitters, and hitters are dominating a minority of pitchers and mistake pitches, in an increasingly all-or-nothing game. The runs are still getting on the board; it’s the how that is troubling.

It’s this lack of simplicity that makes solving the problem more difficult. Every action has intended and unintended consequences; we are here precisely because of those unintended consequences. Changing a baseball, after all, isn’t easy. Shrink the strike zone to reduce strikeouts, and you’re asking for more walks, which not only keeps the fans bored but also stretches the innings. Move down (or back) the mound and you’re only asking those pitchers to maximize their effort even more to compensate, demanding more arms to the sacrifice. It’s a difficult balance.

On lap 22 of the 1987 Winston 500, coming out of a turn, NASCAR driver Bobby Allison ran over some debris on the track, which caused his tire to explode. His car spun backwards and lifted into the air, tearing 100 feet of protective catch fence between the track and the spectators. Allison was unharmed, and one spectator was blinded in one eye by the shrapnel. But it proved to be a scare rather than a tragedy.

The accident wasn’t uncommon. The speed was. Advancements throughout the 1980s had led to racing speeds around 210 mph, faster than ever before, which was causing crashes to be more dangerous than ever before. NASCAR responded by installing restrictor plates on all vehicles, ⅛” thick metal designed to limit air flow into the engine and thus reduce top speeds. They remained in use until 2019, when Daytona was the last track to switch to a more advanced tapered spacer.

The restrictor plates were necessary, but that didn’t make them popular. Drivers disliked them because a lack of top speed reduced some of the technical skill of the act of driving; racers found themselves just putting their foot to the floor more often. And that same hard cap on top speed had an effect on the races themselves, creating more grouping among the cars, which in turn ironically led to more (if somewhat safer) collisions.

Baseball is in desperate need of its own restrictor plate. Players are bigger, faster, and especially stronger in an age of specialization and weightlifting. Much as contact sports like the NFL and NHL have learned with their clumsy attack on concussions, athletes have outgrown what the rules and bounds of the sport can incorporate. But we can’t simply ask pitchers to throw at 85 percent and abide by the honor system. It has to be incentivized, by carrot and stick—make avoiding maximum effort on every pitch the only way to stay on the roster on the player level and stay in every game on the manager and front office level. This is why the dip in back-to-back reliever usage is so disheartening. We know relief pitchers are eating more and more innings, but they’re also being babied because persistent usage at 100% effort will (and does) result in injury. Additional days off allows relievers to return at full health, increasing the sharpness of their stuff and further disadvantaging hitters, who can’t glean the benefits of a tired arm like they used to.

The most pernicious aspect of velocity creep is not the starters who suddenly throw 100 mph, but rather the transformation of bullpen carts into clown cars, each unidentifiable reliever emerging throwing harder than the last. The phrase “95 and a slider guy” has been around and it used to be a compliment, a bland bit of praise but praise nonetheless. It implied a future in the bullpen, but also a real future. Now it is simply generic—a qualifier to reach the majors, and perhaps reach it half a dozen times in a season, not an indication of a career there.

The question of a restrictor plate for pitchers isn’t one of actually limiting their physical prowess, but applying pressure to it. To take the ability to throw 95-97 miles per hour, and say “maybe that’s not the wisest course of action for yourself or your team.” If consistently throwing in the mid- to upper-90s requires more rest … what happens when that rest is reduced? Or removed? Unquestionably throwing at less than max effort would require less rest at some particular threshold, the question is what threshold and how do we enforce it without being heavy-handed. We’ve already seen one attempt (the three-batter-minimum rule) fail in this regard.

What’s to be done?

The big upstream cudgel here is limiting the number of pitchers allowed on a roster at any given time. The league was prepared to do this prior to COVID-19, set to expand rosters to 26, limiting only half of  available spots to pitchers. That went out the window, understandably, when the season necessitated the ability to prepare for the loss of a player at a moment’s notice. But it also wasn’t aggressive enough to begin with: the number needs to be 12. In the age of 13-14 man pitching staffs, this feels aggressive, but it wasn’t that long ago that 12 was seen as inflationary. This limitation will serve as an incentive to starters and relievers alike to value the number of outs recorded over the method, applying pressure on those who max out on every offering by eliminating the down time between their next appearance.

(And to sew up those loopholes in advance: return the post-COVID IL stint for pitchers to 15 days, and prevent shuttled pitchers from shuttling their way back to the majors days later, artificially expanding that reliever pool.)

Mix in an actual enforcement of pitch clocks, which reduce recovery time between individual pitches for max-effort throwers, a stop to the practice of adding Elmer’s glue to the baseballs, and a ban on position players pitching, except in the case of double-digit score differences, and we will see the value in absorbing innings—whether from a starter or reliever—return. Inevitably, injuries will happen and they will be blamed on adjusted workloads and roster caps. This of course ignores that injuries are occurring at a record pace right now, with no caps, large staffs, and consistent off days for relievers. This is not an indifference to those who are injured, but an acceptance of the risks of pitching, seemingly regardless of the frequency, and the hope that with pitchers throwing at less than 100% effort on each offering, more good health is in store. It is, again, a difficult balance. But a worthwhile one.

Most of the changes we’ve seen are intentional efficiencies. Keeping an extra reliever or two around and spacing out work is more valuable to teams than a bench bat that might not even be needed. Sending out the sixth guy in the bullpen works better than putting out that tired starter. But they work because the rules allow them to work. Those rules are there to shape the sport, to act as the container in which the game diffuses. The idea isn’t just to win, but to win based on constraints; you can’t just shove a guy off the base and tag him out, because we don’t want that.

Sports feel incredible when they force people to think outside the box, but for that you need a box. And where you put that box—what you limit—really matters. The third time through the order penalty doesn’t have to be a bug; it can be a feature if the rules force teams to brave it and reward the starters who can best survive it. And as with lifting the restrictor plates, it’ll cause the cars to unbunch some; instead of the army of fungible two-pitch relievers, the truly great starters will be given the opportunity to prove it.