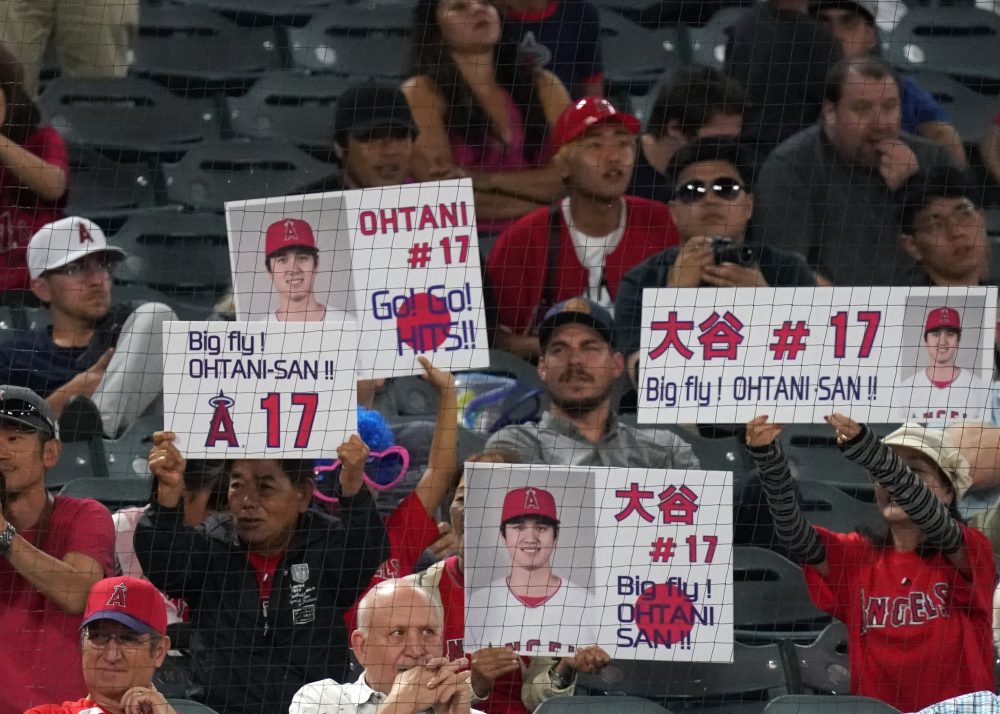 In the 1949 John Wayne World War II film Sands of Iwo Jima, there is a brief scene that is quite disturbing, albeit for different reasons than the filmmakers intended. During the titular battle, a squad of American soldiers crouches nervously in their foxhole. It is night and infiltration by Japanese soldiers is a real threat. When it finally happens, the Japanese don’t crawl towards the Americans, they slither. It underscores the extent to which, almost five years after the war ended, the conflict was seen as much as one between races as between nations—the enemy isn’t human, he’s a snake.

This hatred toward the Japanese was just a natural feeling that developed elementally. Our attitude toward the Japanese was different than the one we had toward the Germans… Once… on Okinawa, I saw Mac take great pains to position himself and his carbine near a Japanese corpse. After getting just the right angle, Mac took careful aim and squeezed off a couple of rounds. The dead Japanese lay on his back with his trousers pulled down to his knees. Mac was trying very carefully to blast off the head of the corpse’s penis. He succeeded. As he exulted over his aim, I turned away in disgust. Mac was a decent, clean-cut man.—E.B. (Sledgehammer) Sledge in The Good War: An Oral History of World War Two by Studs Terkel

The war of small Pacific islands was often close, brutal, hand-to-hand. The opponents were sometimes near enough to hear each other speak. “To Hell with Hirohito!” the American boys would shout. “To Hell with Babe Ruth!” the Japanese boys would shout back. It was a telling response. The Japanese emperor was a sacred figure, so remote that, until the very end of the war, no one outside of the government’s inner circle had even heard him speak. As a mere politician, Franklin Roosevelt wasn’t a parallel figure. The Japanese tried to-helling him first, but the insult didn’t have any punch, because as popular as the president was, no elected official is universally beloved. There was even a joke that went around that an American soldier said he couldn’t hate the Japanese after that, “Because like me they are good Republicans.” The Babe, though: He had stature that Roosevelt lacked.

This got back to Ruth and he took it personally. He made a point of plowing $100,000 into war bonds. He was pushing 50; it was what he could do.

When the unwise opposing team charged the United States Marines at Cape Gloucester [New Britain], employing this odd malapropism to strike terror into American hearts, instead of rattling the men up at bat, thirty Japanese were struck out for good and none walked.

Good old Babe Ruth, interviewed in New York, came out with succinct comment on the losing score. Said he: “I hope that every [slur] that mentions my name gets shot. And to hell with all [slur plural] anyway!”—The Hartford Daily Courant, March 5, 1944

They knew Babe Ruth in Japan; he had gone there on a baseball tour after the 1934 season. He wasn’t the reason Japan learned to love baseball—they’d been playing a long time by then—but his charismatic presence no doubt provided another brick in the wall of its enduring popularity and therefore is somewhere on the list of preceding events that brought Shohei Ohtani to American shores.

It’s an odd and sinuous road that brought Ohtani to us and vice-versa, and the destination was not at all inevitable. There are versions of the United States to which he wouldn’t have wanted to come and which wouldn’t have wanted him. That’s particularly true of his adopted baseball state of California, where at the turn of the 20th century Americans who had practiced their racism on Chinese laborers turned their dark arts on the Japanese, who they characterized, per the San Francisco Chronicle, as “ant-like in their incessant activity in undermining our institutions.” (1905) “The movements, the coming and going of these stoical, strange Mongolians are as a closed book to the white races,” the Chronicle continued, implying some sinister conspiracy. The forces of paranoia and xenophobia had temporarily been placated with the Chinese Exclusion Act of 1882, which attempted to forestall all Chinese immigration to the U.S. Now they wanted Japanese immigration throttled in the same way. Eventually they got what they wanted, beginning with 1907’s “Gentlemen’s Agreement” which greatly curtailed Japanese immigration, then in the infamous, eugenics-motivated Immigration Act of 1924, which eliminated it entirely. These strictures remained in place until 1952. Simultaneously, California went right on doing what it could to make life untenable for Japanese immigrants and their citizen-children, including “alien land laws” which prevented any residents ineligible for naturalization from owning property. These efforts climaxed with Franklin Roosevelt’s executive order allowing for the internment of Japanese-Americans, which was instigated both by prominent members of California’s government (such as Attorney General Earl Warren) and the Army following the Empire of Japan’s surprise attack on Pearl Harbor.

It goes without saying that the attack of December 7, 1941, which killed about 2,400 Americans and injured almost 1,200 more, gave many Americans a justifiable reason to be angry at Japan, but it should also go without saying that distinctions should have been made among “actions undertaken by the Japanese government, Japanese military, or Japanese soldiers, sailors, and airmen,” “ordinary Japanese citizens,” and “Americans of Japanese origin or descent.” Due to the long animosity held by white Americans towards Japanese immigrants and their progeny, that was impossible. In other words, if the “treachery” of Japan on December 7 unleashed a war with a strong racial component, it was due in part to the act itself, and in part because the intense emotions it provoked liberated an Anti-Asian, Anti-Japanese sentiment that had been present in the country for more than half a century.

The lack of Japanese-born professional ballplayers in the major leagues both before Masanori Murakami and in the 30 years between his return to Japan and the arrival of Hideo Nomo has been variously attributed to the immaturity of the Japanese game in earlier decades, the differences in rules, cultures, baseballs, and ballpark dimensions, and the fact that Nippon Professional Baseball has wanted—not unreasonably—to retain the best talents for its own audiences. There are elements of truth in the foregoing, but these explanations do not incorporate the disincentives created by the United States government at the instigation of American citizens who employed openly racist tactics and rhetoric. Nomo’s success paved the way for the many Japanese talents we have enjoyed in the more than quarter-century since his arrival—Yu Darvish, Masahiro Tanaka, Koji Uehara, Daisuke Matsuzaka, Hisashi Iwakuma, and more on the pitcher’s mound, Ichiro Suzuki, Hideki Matsui, Kazuo Matsui, Kenji Johjima, and others at the plate and in the field. Now we have Ohtani as the apotheosis of both branches, and it’s wonderful that he’s here, but if he is without antecedent it is not only due to his incredible abilities but because although Japan might have had another, prior Ohtani ready for America, America was not ready for a prior Ohtani.

The earliest such a player could have arrived was the 1990s; the 1980s brought a new anti-Japanese panic, this one over that country’s rising economic status and its successes in the technological and automotive sectors. The Detroit manufacturers were decrepit and Toyota vibrant, the land under the Empire State Building was purchased by a Japanese hotelier, and Nintendo bought the Mariners. Relics of this ugly period are as trivial as the 1986 Ron Howard film “Gung-Ho” and the 1992 Michael Crichton novel Rising Sun and as serious as the 1982 murder of Vincent Chin, a native of China who was mistaken for Japanese by two Michigan autoworkers. They beat Chin to death, saying, “It’s because of you [expletives] that we’re out of work.”

Somehow that panic faded as the Japanese “economic miracle” subsided, and it would be pleasant to think that baseball, Nomo, and the many players who followed him had something to do with it. Yet, it would be naïve to believe that those days are gone. When one looks back at what people said and thought during that long-ago initial anti-Japanese panic and reads, “The [plural slur] in this country are here to look out for themselves—to get our money and learn our ways. They are in reality spying on our civilization. America is altogether too tolerant of immigration, let alone this Asiatic type… [they] glory in their allegiance to their Emperor and can never be loyal to America” one is struck by how certain those Americans seemed about the validity of their hatred. Today we are certain we love Shohei Ohtani, we thrill to his pitching excellence and incredible power. But the past isn’t ever wholly over in America, and the demon of bigotry still writhes angrily in fevered American minds. In 2021 violence against Asians and Pacific Islanders is on the rise; the California coalition Stop AAPI Hate has noted nearly almost 7,000 hate incidents between March 2020 and March 2021. The attackers would seem to be certain too. Maybe the perpetrators of those acts don’t care about Ohtani, maybe they just haven’t heard about him, or maybe we are what we are and the hard labor of cleansing our souls has far longer to go.