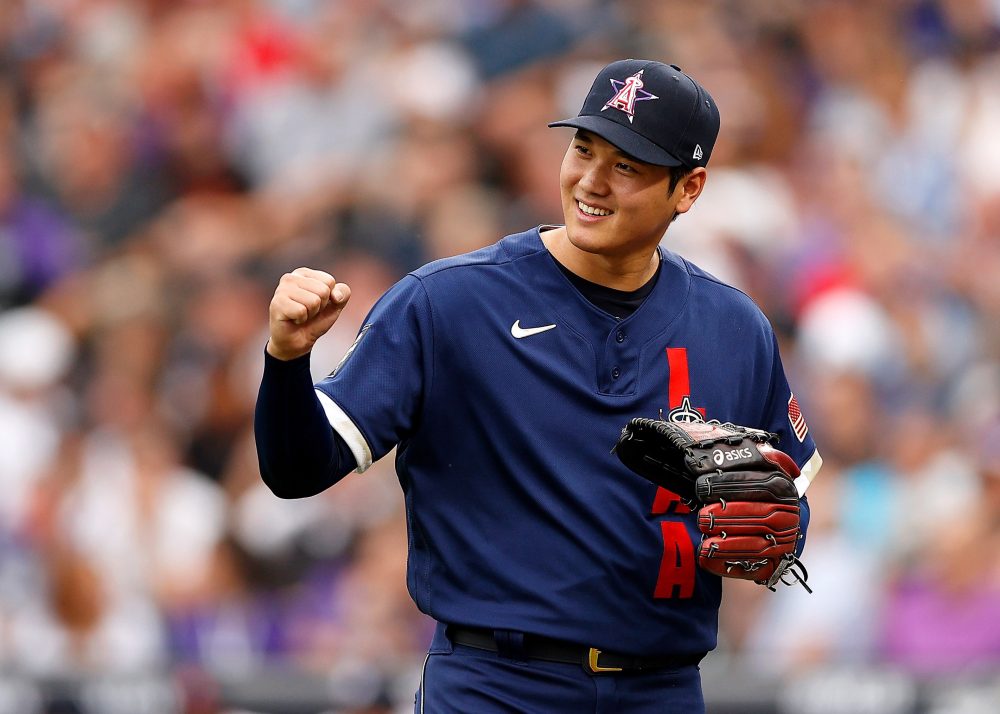 This is the magic of Shohei Ohtani: at any point when he’s on a baseball field, you’re likely to see something special. You may even see a sequence of events that nobody has ever seen before. He can light up the radar gun to levels only surpassed by Jacob deGrom. He rips off 80-grade splitters whenever he wants, and he hits the ball in the air harder than anyone in the league. He has a 72 DRA- this season—that’s borderline ace-quality—and if the game situation warrants, he trots out to the outfield after he’s done pitching, since the Angels usually give up the DH when he’s toeing the rubber. Because he’s also leading the league in home runs hit, and anecdotally, moonshots that go viral on Twitter. He’s the best power hitter in baseball and one of the best couple dozen starting pitchers.

He is the first Shohei Ohtani. There have been no comparable players for many decades now. Our grandchildren will be using him as the measuring stick for whatever comes next.

I was at MLB’s version of Ohtani Week last week. I knew going in that I’d see several things never seen before: a player named to the All-Star Game as both a pitcher and a hitter, and an All-Star pitcher in the Home Run Derby. Yet what I came away with the most is that Ohtani, through immeasurable skill and charisma, is forming a connection with the fans the likes of which Major League Baseball hasn’t seen in a long while.

I went out to Denver to cover the Futures Game. But if I’m being honest, I volunteered to go when I figured out that I’d be credentialed for all three days, and the major-league events would feature Ohtani trying to break baseball. When else are you going to get to hear “leading off, the designated hitter and starting pitcher” in a nationally-televised event? I wanted to be there covering it.

On paper, Ohtani had a ho-hum week. He only pitched an inning, and it was a perfectly good Ohtani inning, but he also really didn’t do anything truly out of the ordinary. He “just” scraped 100 in a normal-looking scoreless frame. At the plate, he went 0-for-2. He was out of the game and doing his media availability by the end of the third inning. That was a missed opportunity to showcase his unique skills for the entire game.

To the fans at Coors—and at least this scribe in the auxiliary press box—the real attraction was actually the night before in the Home Run Derby, with Ohtani leading eight of baseball’s biggest boppers trying to break the physical laws of homers in the majors’ biggest launching pad. From the first time Ohtani popped on and off the field to increasing cheers during AL workouts on Monday afternoon, he was the star of the show. Eventually he grabbed a bat and took a short round of batting practice, his first round outdoors in months. He promptly clobbered one to the uppermost reaches of the upper deck in right, way deeper than anyone had hit it in two days of workouts.

Ohtani’s first-round Derby matchup with Juan Soto was one of the most electric atmospheres I’ve ever experienced at a sporting event. The crowd reacted far more to Ohtani than they did for Nolan Arenado, the revered former face of the Rockies, or Trevor Story, their remaining if soon-to-be-traded superstar. They chanted “OH-TANI” in unison like he was The Rock twenty years ago at the height of his wrestling superstardom. They saw magic in a pitcher launching monster homers all over Coors, and it inspired as much enthusiasm as I’ve ever seen in a baseball stadium.

After a slow start, Ohtani caught up to Soto’s 22 homers with a massive late barrage. They tied again in overtime, and a gassed Ohtani just didn’t have anything left for double overtime. He wouldn’t have stood a chance against Derby machine Pete Alonso in the semifinals anyway. Maybe it was even better that he went out in a thrilling battle with one of the great young hitters in baseball.

As good and exciting as Ohtani is, he’s still on a second-division club likely to miss the playoffs for the seventh straight season. His games are frequently on after fans who aren’t on the west coast have gone to bed. And of course, Major League Baseball all too often doesn’t do excel at marketing its stars even when they make it easy.

The sheer wattage of Ohtani’s accomplishments is shining through anyway. Per Fanatics, Ohtani has sold ten times as much merchandise as any other MLB player in July, and more than any professional or college athlete in any sport. Television ratings were way up for the Derby, peaking during the epic Ohtani/Soto encounter.

I’m glad so many folks tuned in. They saw baseball’s greatest showman putting on one of the most exhilarating shows I’ve ever seen on a baseball field. There’s no better advertisement for the sport.