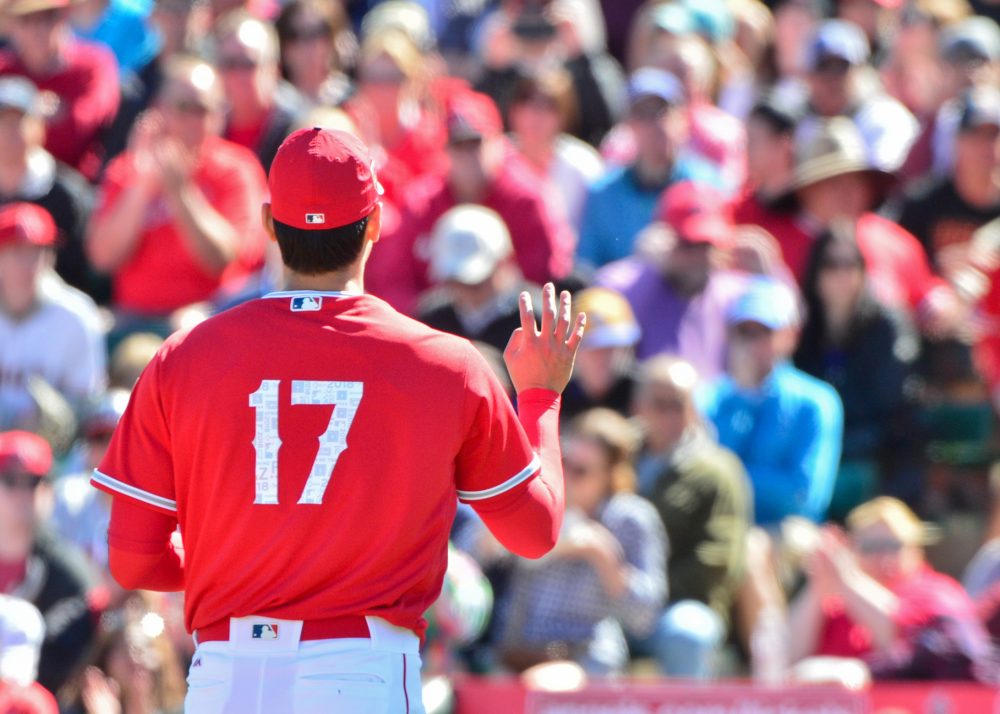 As Shohei Ohtani accomplishes what modern baseball fans thought impossible, he’s also capturing the attention of millions of baseball fans, both current and future. Between his winning smile and historic deeds, Ohtani seems to be the rare baseball figure whose fame can transcend the diamond. Fittingly, Ohtani is himself driving thousands more fans to the games he starts on the mound, possibly paying for his own contract and making him even more of a bargain for the Angels.

Last week, I wrote about how star pitchers are correlated with big attendance bumps for the home team. Even correcting for all sorts of factors that influence how many fans show up (like weather, timing of the game, etc.), I found that some of the biggest names of the last decade have been associated with thousands of extra tickets sold.

It stands to reason that Ohtani, with his international superstardom, charm, and amazing performance, might drive a similar attendance bump. And the available counts of fans from this half season suggest Ohtani may end up with one of the larger attendance effects of the last decade.

On average, games with Ohtani on the mound have featured some 3,800 more fans in attendance than other Angels contests. This is a remarkable effect—larger, even, than the biggest impact I found (Clayton Kershaw’s +3,500 fans) in the previous article I wrote on the attendance bumps provided by star pitchers. But it’s not directly comparable, for a lot of reasons: This is the raw average increase in a much smaller sample size (only 14 starts), and in a season with significant capacity limits driven by COVID-19 restrictions.

Doing an apples-to-apples comparison shows that only a handful of pitchers have matched the +3,800 fans differential Ohtani is managing this season, and some of those appear to be small-sample abnormalities. If Ohtani keeps it up, he may end up with the largest attendance bump in a given year of any pitcher in the last decade-plus.

A recent Angels homestand illustrates the effect perfectly. Typically, weekend games tend to be the best-attended, and this four-game series against Detroit ran from Thursday to Sunday (on Father’s Day weekend). Ohtani’s start was Thursday, and nearly 31,000 fans came to the game that night. No other game in the series had more than 23,000 in attendance, meaning Ohtani may have driven thousands of extra fans into the stadium, on a weeknight, before Father’s Day that Sunday.

Nor is the Ohtani effect limited to home games. In a May 11th start in Houston, about 3,500 more fans showed up to see the tall ace sling 100 mph fastballs than attended the game the day before and after.

And the attendance bump Ohtani drives appears, if anything, to be increasing as the season goes on. Through half of June, it stood at roughly 3,000 extra fans per game; now it has crept closer to 4,000. As his fame grows, word of his historic season spreads, and attendance limits disappear, it stands to reason that more and more people will turn up to see him play.

What makes Ohtani special is not the fact that he’s an ace pitcher—there are plenty of those—but rather that he pitches and hits. And here, we run into statistical trouble, because there are so few days when the Angels play without Ohtani on the mound or in the field that there is essentially no “control” condition. The alternatives in most Angels’ games so far this year have been “some Ohtani” or “maximum Ohtani” but hardly ever “no Ohtani.”

The absence of no-Ohtani situations means that the attendance effect is likely to be an underestimate. If a few hundred extra people show up to see the Japanese superstar hit, then the “true” effect is his pitching impact plus that baseline of when he’s a position player. Fortunately for the Ohtani-watchers out there, there just aren’t many off-days to estimate that reliably.

One of the odd and unfortunate quirks of the player compensation system is that Ohtani is scheduled to make only $3 million this season. Juxtaposed with his historic accomplishments in posting what may become one of the best and most unique seasons of all time, he’s criminally underpaid. Add on top of that the fact that an extra 4,000 or so fans show up to his starts, each paying around $50 for the privilege, and Ohtani may in fact be paying for his own salary, nevermind the historic performance he’s putting up.

(In fairness, that assessment ignores his $20 million posting fee and the modest production of his first two years in MLB. But even taking those into account, he’s a huge bargain.)

Like my previous article, this analysis can’t measure any additional effects Ohtani likely has on Moreno’s bottom line, from the tangible impact on jersey sales to the halo effect (pun intended) on brand loyalty. Ohtani is almost single handedly making the Angels relevant and worth watching while teammate Mike Trout recovers from a long injury and after David Fletcher’s shattered hit streak.

The Angels’ current playoff probability stands at around eight percent. Without Ohtani’s standout performance—and the 3-5 wins he is responsible for—those playoff chances would be close to zero. The Angels’ star is essentially keeping their slim hopes alive on his own.

It’s a tragedy for MLB that Ohtani’s masterpiece appears wasted on a team with few realistic playoff hopes. All the media attention lavished on him now would pale in comparison to the spotlight if the Angels made the postseason. The one accomplishment that could cap the two-way star’s year would be October heroics, but for now, it looks like we’ll have to settle for merely one of the greatest seasons ever.

You need to be logged in to comment. Login or Subscribe
brucegilsen
How much of this could be a zero sum game, where fans who plan to attend a game specifically say, "Let's go to the one where Ohtanti's pitching"?
Reply to brucegilsen