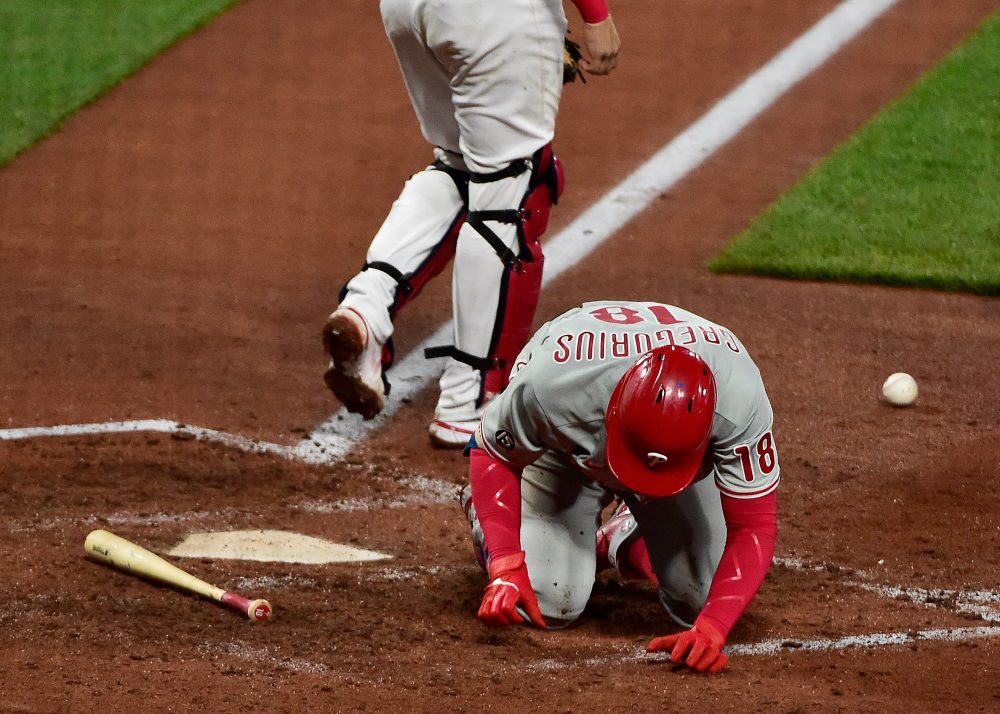 With Cabrera’s first pitch of the day, to start the sixth inning, the St. Louis reliever put a 97-mph fastball into Bryce Harper’s face. To judge by the left-hander’s pained response, let alone the fact that it was a 3-3 game with nobody out, there was clearly no intention behind the pitch.

With his very next pitch, Cabrera floored Didi Gregorius with a fastball to the ribs. Again, the pitcher’s body language said it all: this was no grudge-settling moment, only a struggling ballplayer being completely lost on the mound.

Still, it was concerning enough that Cards manager Mike Shildt said afterward that, had he had the option, he would have replaced Cabrera after Harper’s at-bat. Given MLB’s new three-batter-minimum rule for pitchers, however, the only way for that to happen would have been for plate umpire Chris Segal to eject the pitcher.

This is partly what Phillies manager Girardi was arguing when he emerged from the dugout to argue. He wanted Cabrera ejected—up to and including a pretty slick imitation of what Segal might look like had he too possessed such an inclination—not because he felt that Phillies hitters were being targeted, but because Phillies hitters weren’t being targeted, and they were getting drilled anyway.

“I understand they don’t want things to escalate, but if a guy hits a guy in the face and a guy in the ribs with two pitches he’s got to [be ejected],” Girardi said after the game in a St. Louis Post-Dispatch report. “If you’re really protecting the players, obviously he doesn’t have command. He’s got to go. What if I got another lefty up? Now I’ve got a shortstop that probably might have to have imaging on his ribs. And you’re going to let [Cabrera] stay in the game? Is it because of the three-batter minimum? I don’t know. He’s got to go. Just for the safety of the players.”

That was only part of Girardi’s grievance. What also got under his skin was an ages-old dilemma for which baseball has uncovered few good answers over the years: Following Gregorius’ plunking, umpires warned both benches. Should any flames be further fanned during that game, ejections would come hard and heavy.

From The Baseball Codes:

A downside of the warning system—in which an umpire sensing trouble issues a cease-and-desist order to both dugouts, with immediate ejection for both player and manager should any violation occur—is that it negates the time-tested practice of checks and balances. Once a warning is issued, retaliation is essentially legislated out of the game. This increases the risk of lingering bad feelings without an appropriate way to channel them. Some managers even go so far as to instruct their pitchers to take the ﬁrst shot in a bad-blood situation quickly, which basically gives their team a free pass before warnings are issued and the business of tit-for-tat is shut down for the night.

“It was a lot better [under the old rules],” said longtime Braves man­ager Bobby Cox. “It was over with and done. Guys knew to expect it, and it was done right. We still do it, but you’ve really got to pick your spots.”

The anti-escalation intent behind Segal’s decision was obvious. Practically, however, it merely delayed retaliatory action until another day. It also allowed Cabrera to remain in the game.

And so Girardi raved. And so Segal tossed him.

Who Segal did not toss was Cabrera, who made it three pitches into the ensuing at-bat by Andrew McCutchen before serving up an RBI single, at which point, quota fulfilled, Shildt duly yanked the pitcher.

In their postgame comments, the Cardinals did their best to smooth relations between the clubs. Cabrera was contrite, saying, “I want to again apologize for all of the action that happened, especially to Harper …The game got away from me at that point. I’m really sorry for everything that happened today. None of it was intentional.”

Shildt went so far as to compliment Girardi’s tirade. “I completely understand their aggressive response,” he said. “Joe handled it appropriately. I can’t speak for him, but he has to stand up for his guys.” The manager spoke in respectful and understanding tones about the Phillies’ discontent, and made sure to claim lack of intent behind either HBP.

In some ways, the Phillies seemed similarly ready to move on. Girardi said that he didn’t think that Cabrera’s pitches were intentional. According to reporter Derrick Goold, Harper, after recording an I’m-all-right video from the hospital, sent a message to Cabrera “that showed ‘empathy for the guy who hit him.’ ”

Those feel-good sentiments lasted until the ninth inning of Thursday’s series finale, when, with two outs, Phillies closer Hector Neris drilled Nolan Arenado. It was a 3-3 game at that point, not ideal for a retaliatory strike, but the bases were empty and the pitch sure looked like a heat-seeker. Based on their reactions during Wednesday’s game—when Rhys Hoskins spent long minutes staring daggers toward the Cardinals and Sam Coonrod yelled and pointed toward the St. Louis bench after pitching the eighth—the Phillies seemed primed for such action. There was no mistaking the absence of both Harper and Gregorius in their lineup.

Further warnings were issued after Neris’ pitch, but by that point it seemed almost irrelevant. According to the unwritten rulebook, after drilling a star player in response to the drilling of a star player, things are now even. Shildt said as much himself after the game, calling it “old-school baseball.” “A couple of their guys got drilled pretty good, so you can expect some retaliation,” he said. “It was done as clean as possible. And we move on. That’s how the game polices itself.”

In the aftermath, however, umpires are left with an additional wrinkle to consider in the same spirit as bench warnings: In this modern baseball landscape, there might be moments when ejecting a pitcher for his own good might actually serve to cool tensions from both sides of the field. And baseball ever progresses.

This post was adapted from an existing one on Jason Turbow’s site baseballcodes.com. You can find him on Twitter at @baseballcodes.