The completion of the Little League World Series served to remind me of the growth in international baseball. There’s reason to think about that, now more than ever now that 28 percent of baseball players in 2006 were born outside of the United States, the highest percentage of all time. With the introduction of the World Baseball Classic, Major League Baseball now actively promotes the game around the world. The hoped-for growth in the popularity of the game promises to expand the talent available to teams, which should make the game even stronger.

The growth of foreign born ballplayers holds an important lesson for MLB, however. The following graphs shows the percent of players born outside the United States from the inception of the modern two-league system in 1901: 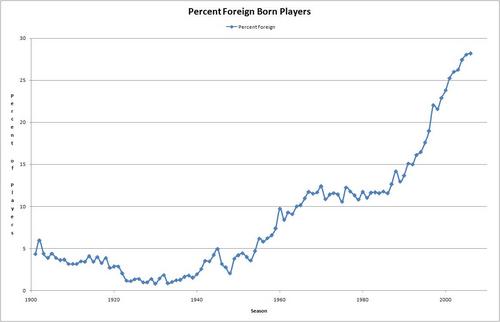 I find this chart fascinating. For the first forty years of the twentieth century, the percentage of foreign born players stayed low, reaching just 0.8 percent in 1930. It rose again during World War II, as native-born players became scarce. The end of hostilities briefly brought the percentage down again, but after 1948 international players entered the game quickly, rising to 11 percent by 1967.

Then the growth stopped, and the percentage of foreign born players stayed constant for two decades. In 1987, however, the number of international players takes off again and the growth shows little signs of abating. What are the underlying causes of these periods of stagnation and growth?

It’s easy to attribute the breaking of the color line as the reason for the expansion, beginning in 1948. Jackie Robinson not only opened Major League Baseball to black Americans, but to dark-skinned players from all countries. However, while the end of that injustice certainly played a part, the timing of the growth and stagnation phases suggests a deeper explanation.

The three inflection points in the graph (1948, 1967, 1987) represent a change in the cost of hiring United States talent. Major League Baseball adopted the first bonus baby rule in 1947. At this time, amateur players signed as free agents. With the reserve clause in effect, the move from amateur to professional represented the only chance for young men to receive market value for their skills. Over time, these signing bonuses grew, putting pressure on the lower-revenue teams. Just like in recent history, these teams complained that the system was unfair, and that the rich team got to sign the best players. Instead of revenue sharing, however, baseball adopted the first bonus baby rule.

The new rules regulating the signing of amateurs added costs to paying a large bonus.This cost took the form of forcing a team to keep a bonus baby on the major league roster for a period of time, rather than letting him develop in the minors. With the rules actually driving up the price of talent, teams looked for cheaper options, and found them in the bigger talent pool created by the inclusion of black players. Steve Treder notes that during the bonus baby period, black and Latin American players did not trigger the extra costs:

It’s worth pondering why this was so. While many (though assuredly not all) major league organizations in this period were avidly scouting and signing young players of color, every team, without exception, was hotly competing for young white American talent. This put white prospects in a vastly better bargaining position than blacks and Latinos: teams got into costly bidding wars over young white talent, but never for a player of color, as the largest bonuses and most important roster commitments were wholly restricted to white American players.

Certainly, one reason for this was that the families of many African-American and Latin American players were mired in poverty; these young athletes were generally in circumstances in which they couldn’t afford to be choosy about what offers they would accept.

The bonus baby rules contributed to the growth of international talent by making US talent more expensive. But these regulations did little to bring parity to the majors as the Yankees built the greatest dynasty in the history of the game. So in the middle of the 1960s, Major League Baseball introduced the amateur draft, which greatly limited the bargaining power of amateur prospects. With the cost of these amateur players under control, there was no longer a need to actively recruit foreign players, and growth in their numbers stagnated for twenty years. But drafted players eventually found leverage:

Player salaries continued to to escalate through the 1980s. In 1986, Bo Jackson became the first draftee to sign a total contract (signing bonus and salary) worth over a million dollars. Jackson, a Heisman Trophy-winning football player for Auburn University, was also the first overall choice in the National Football League Draft, and was offered a seven million dollar contract to play football for the Tampa Bay Buccaneers.

Not long after that, players started dropping in the draft due to the anticipated cost of signing them, not based on their talent. It took a while, but players figured out how to game the draft to bring in the maximum signing bonuses. By announcing they wanted large amounts of money, or committing to play at college, they fell through to the richer clubs that could pay more. With the price of amateur talent once again on the rise, incentives were in place to look for cheaper talent overseas. As the graph shows, that’s exactly what happened.

It seems clear that regulating parity doesn’t work long term. Eventually, great players find ways to get money from rich teams, and the rich teams are only too happy to facilitate that search. But in the two cases where the price of amateur talent rose due to regulation, those costs were controlled with an expanding talent pool. Given this evidence, why draft at all? An amateur free agent pool that included North America, Latin America, and the Pacific Rim is more likely to control costs than any regulatory scheme short of price-fixing draft slots.

Through the World Baseball Classic and other international ventures, Major League Baseball seeks to increase the popularity of the sport worldwide. Success in this area means an ever increasing reservoir of talent to supply the major leagues. Allowing these international players to compete directly with North American amateurs as free agents should do a better job of controlling acquisition costs than any of the schemes of the last sixty years. It’s just a matter of keeping the supply high.