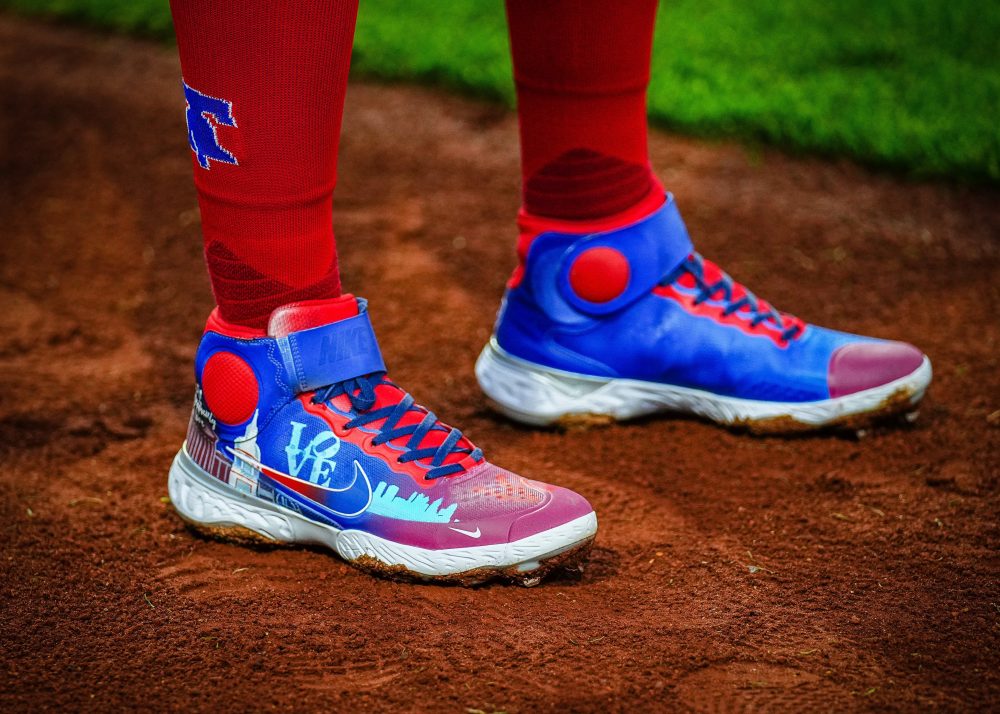 On Monday night, Philadelphia Phillies first baseman Rhys Hoskins wore some notable cleats. This specific pair was worn in order to be auctioned off following the series against the San Francisco Giants, and the money would go toward More Than Baseball, an organization that raises money for minor-league players in order to help them with their bills, to find housing, and to pay for their equipment, among other things. More Than Baseball does some good work: it’s staffed by former minor-league players, with some MLB players pitching in significant donations over the past couple of years, and this cleats thing is enough of a trend that the auction actually happens on part of MLB’s official website. The Phillies even tweeted about it to raise awareness of what Hoskins was doing, and to maybe get some folks energized about bidding on the cleats to help:

Rhys is using some Philly 🔥 to pitch in with @mtb_org.

You can bid on his cleats after this series on https://t.co/HeG8qXdSox to help benefit minor leaguers with financial guidance, housing assistance and more. pic.twitter.com/5Ph8vwueRx

In a vacuum, this is all pretty cool. An MLB team’s twitter account, helping to ensure minor-league players get some of the help they need! In reality, where context lives, it is the Phillies—and whichever other teams tweet about an auction to financially benefit minor-league players—taking their turn as Tim Robinson in the hot dog suit, trying to find whoever is responsible for the poverty of minor-league players when there is no one at fault but themselves. I don’t have a good analogy for how MLB teams’ very purposeful depression of minor-league player salaries could be represented by a hot dog car crashing through a storefront, but just know I gave it at least 30 seconds of thought before quitting and typing the sentence you just read instead.

Part of what makes this so enraging is that you knew it was coming if you were paying any amount of attention. I’ve mentioned More Than Baseball in a positive light a number of times, be it here or at SB Nation or in various freelance pieces or at my own site. I’ve also mentioned, more than once, that they were likely doomed to an NGO-like future. A non-governmental organization is a non-profit that, in a nutshell, spends a whole lot of time treating symptoms, not root causes. The symptoms must be treated, of course, meaning that the NGOs and their work are necessary because of the conditions they exist in: in the case of pro baseball, those conditions are nearly all due to the poverty of minor-league players. More Than Baseball does what it can to raise awareness of the awful living conditions of minor-league players, to raise money to help stave off some of the worst parts of them, but that’s what NGOs do. They treat symptoms, with no real moves towards removing the cause of said symptoms.

This is not me saying More Than Baseball should stop what they’re doing, or to disparage them in any way, or to imply that they don’t want to remove the root causes of MiLB player suffering. I absolutely understand why they would work with Major League Baseball and its teams in order to draw more attention to these auctions, in order to try to raise more necessary funds for the players they help. The issue is that this gives MLB a chance to do something about an issue they are the cause of, without actually doing anything about it themselves. “Raising awareness” with a tweet doesn’t cost them a dime, which is why they’re happy to let their social teams do it. So long as no one starts to ask why it is that minor-league players need help with “housing assistance” when they work for teams with billionaire owners in a sport where even incessant embarrassment franchises are also worth at least $1 billion, then they’ll keep on supporting More Than Baseball spending your money.

MLB instituted a raise of around 50 percent on minor-league salaries for the 2021 season. Exactly one kind of player makes better than poverty-level wages in this new setup, and that’s players repeating the Triple-A level. There are thousands and thousands of minor-league players out there, and a select few of them can say they aren’t living in what the United States government would consider to be poverty. They aren’t paid for spring training, they aren’t paid if they go into the postseason, there are currently players at the alternate sites that aren’t receiving money from their teams for their hotels, or even for their meals … there is a reason that an entire advocacy group made up of former minor leaguers sprung up last year, in the hopes that they can be a voice for players in need of one.

Minor leaguers need the “financial advice” the Phillies’ Twitter account mentioned because they don’t have any money, but still need to eat, and have to figure out how to make that work. They need housing assistance because, with the exception of the Giants, none of the teams are helping their players with housing—and the Giants aren’t even subsidizing housing for all of their minor-league players. Given the awful salaries, the least MLB teams could do is subsidize player housing so that there don’t have to be six guys living in a much smaller apartment than they should be, just so they can afford to eat and have the equipment they need, and must provide for themselves, to do their job.

There is no reason that MLB teams can’t afford to pay their minor-league players—every single one of them—a living wage. Hell, it’s easier for them to do now than it was even a year ago, thanks to the league lopping off one-quarter of the minors for the 2021 season: now there aren’t even as many players to pay! A $50,000 salary for every player on the remaining 120 teams would be $150 million—split that 30 ways, and we’re talking $5 million per team. Just $5 million per team to have to stop the crowdfunding, the auctions, the begging, the horrid living conditions, the poor working conditions, all of it. Sure, they should also subsidize housing even with a $50,000 salary, but at least with a salary at that level, players could afford to live, to train and, you know, eat in the offseason without needing a second job to do it. Without needing to drive an Uber around after spring training workouts and games are over.

Instead, we get a 50 percent raise MLB paid for by eliminating dozens of teams and hundreds of players, for the sake of efficiency and to let players know they should be glad for what they have—and that raise doesn’t even lift the vast majority of players out of the poverty MLB got Congress to sign off on as perfectly legal with the Save America’s Pastime Act. We get one team out of 30 helping pay for housing, while some clubs aren’t even footing the hotel bills for their alternate site minor-league players. We’re one season off of MLB deciding at the last minute, each and every month, that they’d continue to pay their minor-league players paltry $400 stipends during a canceled MiLB season. And a couple of teams, like the A’s, tried to avoid even spending that much.

More Than Baseball can’t handle or resolve all of these issues themselves, and they shouldn’t have to. They should not be satisfied with MLB teams helping to “raise awareness” or what have you, and neither should we. MLB is the cause of any problem that More Than Baseball aims to rectify. The ideal situation is one in which More Than Baseball, or any organization like it, doesn’t even have to exist, because the issues they work to fix no longer exist. When you’re talking about some major real-world issues, you can argue that there are some complications in place that can keep such a sentiment from meaning much, that it’s an oversimplification of the problems and solutions. Not so with MLB and minor-league players, though. Remember: for just $5 million per team, all of the symptoms would vanish, and it would be because, finally, the root cause has been treated. Every MLB team has $5 million they can put toward a living wage for their minor leaguers. Do not be satisfied or impressed with a tweet.

You need to be logged in to comment. Login or Subscribe
Tony Mollica
Amen!
Reply to Tony
ofmontreal
Is that lawsuit still alive? I wish this were funnier to read but I'm kind of at my hypocrisy limit.
Reply to ofmontreal
Patrick
Any team that compensates its minor leaguers appropriately would theoretically have a competitive advantage when it comes to player development. Better sleep, better food, less stress, and more opportunity to train has to make for better athletic performance, right?

And if the sport as a whole did this, they might be able to attract more top athletes who would otherwise balk at the idea of possibly five years of minor league poverty before even - maybe - getting a chance in the majors. It's ridiculous.
Reply to Patrick
alex chidester
Exactly. There was someone who wrote an article saying as much here at BP in January or February.
Reply to alex
Edward Martin
Double Amen!!
Reply to Edward
ari blum
Absolutely agree with every word. This is why I can’t stand to support either side of the labor strife. Neither side has any claim on right as long as they ignore the conditions minor leaguers are under.
Reply to ari
bringbacktriandos
Also good nutrition for developing players seems to me to be a no-brainer... I don't understand why major league teams do this to their minor leaguers.
Reply to bringbacktriandos