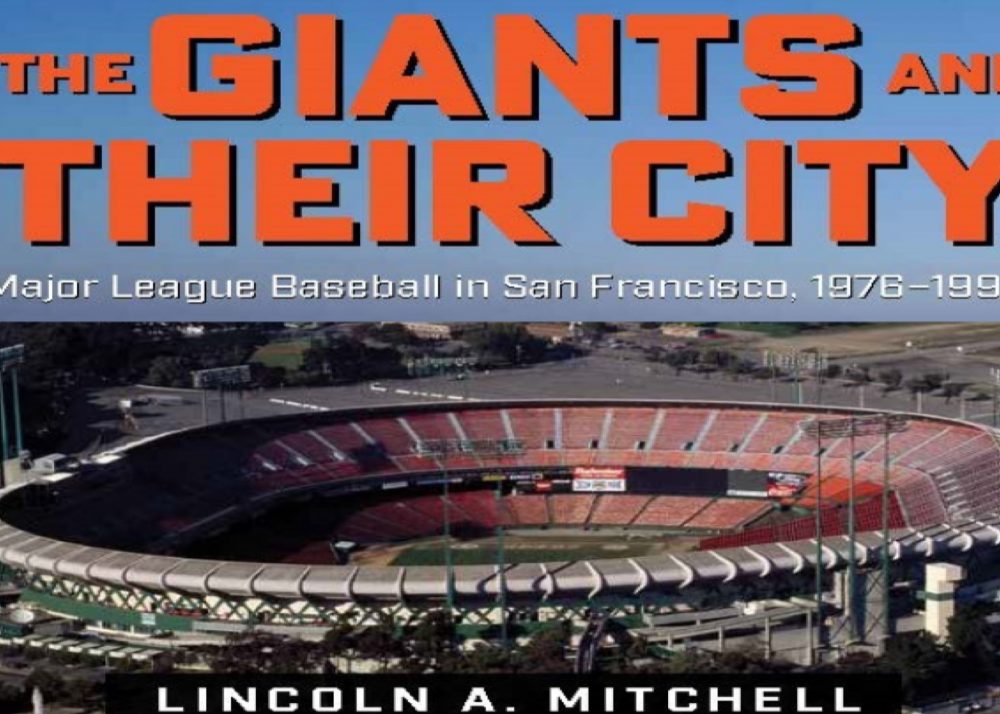 This excerpt is brought to you by a partnership between Baseball Prospectus and the Pandemic Baseball Book Club, a collective of baseball authors focused on the principle of cooperation over competition. Check out their conversations about baseball books and much more at pbbclub.com, and on Twitter at @pandemicbaseba1.

From 1983 to 1985, the Giants could not sell tickets by promising fans they could see Brad Wellman or Johnnie LeMaster go hitless in four trips to the plate, or that they had a chance to see Randy Lerch or Renie Martin get knocked out of the game in the fourth inning, so the team had to find a different approach. This led to a period when the Giants engaged in a series of promotional strate- gies that were innovative, creative, funny, and may have even helped sell some tickets. For many observers and fans of the Giants, those promotions were more memorable than anything that occurred on the field between 1983 and 1985. Larry Baer, who worked for the Giants in the early 1980s after graduating from college described the Giants strategy during these years:

You had to be creative. It became kind of a cult thing not unlike the Grate- ful Dead or punk rock or whatever things San Franciscans like, you know freezing at the ’Stick . . . The Croix de Candlestick campaign we had a lot of fun rolling it out . . . San Franciscans are different. One thing about San Franciscans . . . we celebrate being different. Not liking mascots . . . the Crazy Crab, which was an intentionally designed anti-mascot mascot. Being different, being kind of edgy. The Croix de Candlestick—even if the weather was bad—I don’t think that would work in Philadelphia.1

Baer, who as a fifth-generation San Franciscan and a lifelong Giants fan has a pretty good idea of the culture and gestalt of the city and its team, elaborated: “The cookie cutter thing doesn’t work because we like think the city has a lot of character. We like to think we are different. In many ways we are. Its kind of like the New Yorker illustration. I think San Franciscans are a fairly chauvinistic lot. Willie McCovey was more loved than anybody because he came up here. . . . We feel like we’ve got an innovative culture.”2 Two of the promotions mentioned by Baer captured the spirit of the Giants in those years when the team was pretty awful. The first was in 1983. By that time, the Giants has wrestled for years with the question of how to promote the team despite the freezing nighttime weather, including wind and fog in Candlestick Park. In 1983, Giants director of marketing Pat Gallagher, and John Crawford, an ad man who was advising the Giants, decided that rather than try to combat the reality of the climate at Candlestick Park, he was going to try to use it, to the extent possible, as a marketing tool.

Crawford and Gallagher’s idea was that because by 1983 it was clear that nothing was going to be done about Candlestick Park, and equally apparent that every baseball fan, and even non-baseball fan, in the Bay Area was aware of the cold and wind at Candlestick, rather than hide from the ballpark’s reputation, Gallagher made it a challenge. Fans who managed to stay to the end of an extra inning game at Candlestick would get an orange pin called a Croix de Candlestick. The pin featured the Giants SF logo embedded in snow and icicles and the words “Croix de Candlestick” across the top and “Veni-Vidi-Vixi” across the bottom. The latter was Latin for “I came, I saw, I survived.” Giants fans could collect many Croix and wear them on their caps as a testament both to their loyalty to their team and to their ability to remain outside in the cold.

The Croix de Candlestick was heavily promoted in the Bay Area just before the 1983 season, so fans were very aware of it the first time a home game went into extra innings that year. Gallagher described what happened the evening of April 20, 1983, at Candlestick Park: “The first Croix de Candlestick night we had about three or four thousand of ’em. The first night that we gave them away was a night game against the Dodgers. Jack Clark struck out to send the game into extra innings. As soon as that happened people started cheering. It was a problem, almost a riot, at the gates because people expected them on their way out. . . . We had to figure out another way.”3

Nonetheless, the problem Gallagher described was real. On a cold night, when people are anxious to get home and have little patience, the idea of simply handing out Croix de Candlestick pins was not going to work because it could not be done quickly enough. Following that game, the Giants switched to giving out vouchers after the game that could be redeemed for a Croix at a handful of Bay Area locations, including the Giants’ store in downtown San Francisco. Unfortunately, this cheapened the Croix a little bit as fans simply needed a ticket stub from the extra-inning game rather than any proof that they had stayed until the game was over to receive their pin.

Even today, when attending a ballgame at Oracle Park, one sees many fans, usually well into middle age or older, with a Croix, or a few Croix, on their cap. While the Croix was an innovative and enduring promotion that drew attention to the team and helped brand the Giants in an unusual way, it is not clear that it sold any additional tickets. The simple reason for this is the obvious one. Extra-inning baseball games are not scheduled but occur organically. The Croix was not a giveaway like cap day or T-shirt day that might draw a few thousand more fans to a particular game. Nor was it something that enhanced the fan experience at every game, like better food or a new scoreboard, rather it was something that might happen at any given night game, but most fans knew was relatively rare. Roughly one out of every 10 games goes into extra innings, which means that if these events are evenly distributed between home and the road, and between night and day games, the Giants averaged around six extra inning night games a years. Therefore, the odds of getting a Croix were never very good.

The year after introducing the Croix de Candlestick, the Giants came up with another marketing idea that, while not as enduringly popular as the Croix, was, in its own way, equally memorable. To understand the true subversive only-in-San Francisco brilliance of the Crazy Crab it is important to understand two things. First, the early 1980s were a time when many teams were using goofy mascots. The most famous of these included the San Diego Chicken and the Phillie Phanatic. Across the bay in Oakland, there was no official mascot, but a long-haired, bearded, and frequently shirtless man named Krazy George, beginning in 1981, led fans in cheers, banged a tambourine with a mallet, and is said to have invented the wave. However, Giants fans were never the kind to embrace these kinds of mascots, not least because by 1983 or so, Candlestick Park, between the weather and the team, was the kind of place that required fortitude and determination, rather than light-hearted fun and games.

The second thing any native San Franciscan, or even tourist, other than those who observe kashrut or have shellfish allergies, can tell you is that the crab in San Francisco is delicious. Whether you’re having them at a Vietnamese restaurant in the Richmond or Sunset Districts, dipped in melted butter down by the wharf, or as part of Christmas Eve cioppino, crabs are among the best fare that a city long known for excellent food has to offer.

The confluence of these two factors led the Giants to introduce a mascot, but one that the tough Candlestick crowd would jeer and boo, rather than celebrate. Pat Gallagher, one of the people behind the idea, described how the Crazy Crab came to be known:

In ’84, we had this idea of this mascot that everybody would boo. We’re proving that Giants fans are made of a different grit, determination. They wouldn’t put up with something as silly as chicken or any of that stuff, so we did this phony survey that said 63% of the people surveyed said they would boo a mascot. So, we came up with these TV spots with this guy with an orange crab outfit on the field. At that time we had no intention of putting this thing on the field, but the response to the ads was so great. A week into it we said “what the hell, let’s see what this thing looks like” so we pushed him onto the field with that stupid music. People got up out of their seats and people booed. . . . It was so ridiculous, but it was great fun.4

Bob Lurie, who had hired Gallagher and approved the plan for the Crazy Crab, described how “this guy [the Crab] got pelted. [It was] something for the fans to have fun with. Some of the opposing players would throw things at the Crazy Crab.” Lurie explained the thinking behind ideas like the Crazy Crab by saying simply “we were desperate.”5

The Crazy Crab lasted through almost the entire 1984 season, usually making an appearance and dancing inanely to an equally inane tune that was played over Candlestick’s public address system around the fifth inning. Giants fans dutifully, and with varying degrees of sincerity, booed the Crab. Many threw debris, usually, but not always, of a relatively harmless nature. The Crazy Crab was a genuinely unusual and even strange mascot, but it was a good reflection of a team that was struggling on the field, 13 years removed from its last postseason appearance and searching for an identity.

Excerpted from Lincoln A. Mitchell, The Giants and Their City: Major League Baseball in San Francisco, 1976­—1992. Copyright © 2021 by The Kent State University Press. Used by permission.

The Giants and Their City is available wherever books are sold.