Back in 1973, in the days when Sparky Lyle and Tug McGraw toiled in the late innings for the New York teams, Bruce Stark of the New York Daily News drew a series of caricatures of the Yankees and Mets. (Here’s the Tom Seaver drawing from the series.) When he drew the closers, Stark depicted Sparky and Tug as firemen, a title that stuck to all relievers. That term eventually disappeared from the lexicon of relief pitching-in 2001, the Sporting News changed the name of their award for relievers from Fireman of the Year to Reliever of the Year. By 2000, the closer no longer waited in the bullpen to put out the fire.

In the years in between, the save became one of the few stats to profoundly change the game. After the rule took its final form in 1975, teams and players eventually figured out that the best way to accumulate saves involved starting the ninth with the bases empty and the lead three runs or less. It took over a decade for that to become obvious, but once it did, the concept of closers as firemen, rushing in to put out fires, went the way of the dodo.

The following graph shows the changes in length of saves from the introduction of the rule in 1969 through the current season. An outing of two outs or less defines a short save. Four outs or more defines a long save. The rest are one-inning saves. The graph shows each as a percentage of total saves for each season. 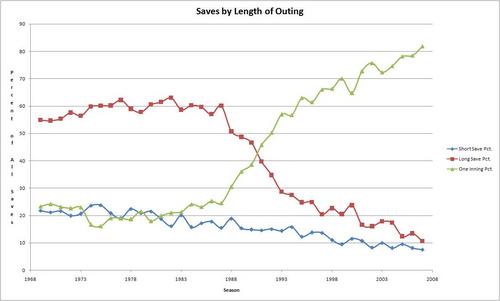 When the save rule initially came into effect, the pitchers lasted more than an inning to earn one. Often, around 60 percent of the saves collected saw the pitcher record four outs or more. At the other end, two-out saves stayed around 20 percent for many years, even after changing the rule to eliminate the one-out save with a big lead. Closers at the time were saved until the starter was in trouble. If that was the seventh or eighth inning, in came the fireman. If it was two outs in the ninth, in came the fireman. Starters were still expected to complete games, so they needed to show they were in trouble before a closer entered. The authors of the save rule had correctly described and rewarded the use of late relievers-pitchers who entered the fray with the game on the line.

The last season with a long save percentage anywhere near 60 percent was 1987. In 1988, long saves dropped to 50 percent. In 1991, one-inning saves were more common that long saves, and a year later they made up most of the saves recorded. Why did the role of the closer shift so rapidly? For that, we can blame Tony La Russa and Dennis Eckersley.

During the course of the 1987 season, La Russa reinvented Dennis Eckersley, initially moving him to the pen as a long reliever before turning to him as the team’s closer after one Jay Howell meltdown too many. In 1988, Eck moved into the job full-time. He appeared in 60 games, throwing just 72 2/3 innings, but earning forty five saves. Twenty one of those were one-inning saves. By 1992, thirty one of his fifty two saves were one inning. La Russa and Eckersley showed that a pitcher could collect lots of saves by pitching in relatively easy situations. According to The Book (p. 211), teams score less than three runs in an inning 93.6 percent of the time, and shutout innings are thrown 70 percent of the time. So entering the ninth with any kind of lead, the odds are well in favor of the pitcher-any pitcher-earning a save. Basically, used to start the ninth with nobody on base, any decent pitcher can wind up with a good number of saves. The stat that had originally been invented to reward firemen now earns chimney inspectors tons of money.

It’s time for the save rule to evolve again, to go back to rewarding the pitchers who succeed in tough situations. On August first of this season, Alan Embree of the Oakland Athletics entered a game against Detroit. It was the top of the eighth with one out, the bases loaded, and the A’s were holding a slim 3-2 lead. Embree induced a short fly out, then struck out the final batter to end the inning. He stayed in to finish the game, but if another pitcher came in to pitch the ninth, Embree would not have earned a save, even though he pitched in the more difficult situation.

How much more difficult? We can use Win Expectancy charts, also provided in The Book to measure the change in expected win percentage over a reliever’s outing. When Embree entered the game, the probability of Oakland winning was 51 percent. At the end of the eighth, with the lead preserved, that jumped to 86 percent, a gain of 35 percent. Starting the ninth with the same one-run lead, the probability of Oakland winning was .825; by not scoring in the bottom of the eighth, Oakland lost some of their earlier in-game advantage. Finishing the inning without blowing the save means a victory (a win expectancy of 100 percent), so the closer in that situation improves the probability by 17.5 percent. By pitching successfully in a situation where where the probability of his team winning was relatively low-and lower than the odds the closer confronted-the pitcher working out of the jam in the eighth is the one who saved the game. He pitched well in a situation in which the slightest mistake might cost his team the lead.

This is exactly where the save rule needs to move. It’s time to decouple the save from the person who finishes the game, and start awarding it to the reliever who does the most to increase the chance of his team winning. This should encourage managers to use their best pitchers in game situations, and still allow these pitchers to gather saves to use to negotiate contracts. What would this save rule look like?

The win expectations are trivial to figure. MLB scores all games electronically in every pressbox, and it will be easy to supply the official scorer with the information real time. In fact, the program could even take into account the quality of the competition and adjust the probabilities appropriately. (It’s more difficult to face the heart of the Detroit lineup than the six through eight hitters of the Pirates, for example.)

How would this change the awarding of saves? Starting the ninth would only yield a save to a home pitcher with a one-run lead, and a road pitcher would earn it with a two-run lead. That is of course, unless someone earlier in the game pitched out of a tough situation, such as two men on and one out. In other words, the pitcher who does the most to put out a fire is the one who gets the save. If there’s no smoke, there’s likely no save. And if two pitchers manage to get out of incredibly difficult situations, they both earn saves.

Blown leads should also become an official stat. Right now, saves are only blown if the pitcher entered in a save situation. Pitchers need to be charged with the negative of blowing the game as well as the positive of saving it, regardless how big a lead they blow.

In the early days of the save, firemen came out of the pen to save the day when the team teetered on the verge of losing. Unfortunately, the gaming of the rule by compliant managers and willing closers means great pitchers often toil in easy to win situations, diminishing the value of the stat. By awarding the save to the pitcher who does the most to improve his team’s chance of winning, and does it with at least the possibility of there actually being a fire, we can once again enjoy a meaningful measure of bullpen dominance.